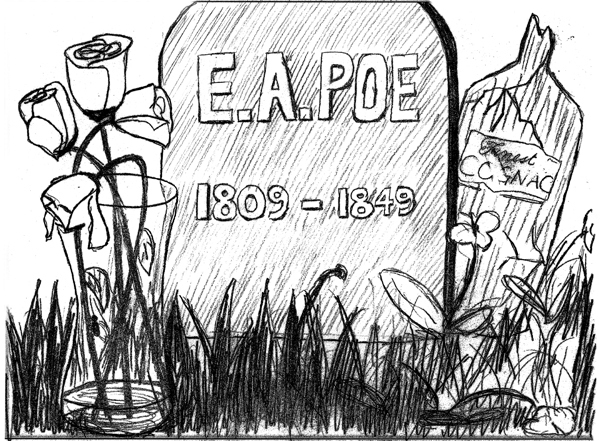 Credit: Greg Hanneman/Contributing Editor
Editorials featured in the Forum section are solely the opinions of their individual authors.

The mysterious figure who has been a longtime visitor to the grave of Edgar Allan Poe may be no more. Often referred to as the “Poe Toaster,” the figure appears at the grave each year on Jan. 19, the date of the author’s death. For the past 60 years, the toaster has been a welcome guest to the Baltimore graveyard where he leaves a note, a half-empty bottle of cognac, and four roses for Poe. Last year, however, the Poe Toaster failed to show — and this year, after a second year of absence, it seems that we can be sure that the toaster is no more.

The toaster has been a figure of mystery since his first visit to the author’s grave. And while a dedicated fan of a long-gone author may not impress many, the Poe Toaster has gained somewhat of a following among fans of the 19th-century writer. Each year, a crowd has formed at the main gate of the graveyard, where visitors huddle and hope to catch a glimpse of the toaster. After last year’s absence, this year, four impostors dropped by the grave, seemingly trying to uphold the long-held tradition. The real toaster, however, never showed. Only two of the impostors left notes, and none of the four gave the secret signal that only Jeff Jerome, curator of the Poe House and Museum, knows.

Many have assumed that the Poe Toaster died, which would seem to be accurate had he begun the 60-year-old tradition as a young man. The plot thickens, however, when the content of the notes is considered. The first note, left in 1993, seemed to signal an inheritance of the toaster role, reading: “The torch will be passed.” A note in 1998 indicated the original Toaster had died and passed the tradition on to his two sons.

The sons, however, did not seem to be nearly as devoted to Poe, or even to the toaster tradition, as the father once was. The notes left in later years have been an unfortunate mix of sad Poe allusions, pop culture references, and political commentary. In 2001, the note read: “The New York Giants. Darkness and decay and the big blue hold dominion over all. The Baltimore Ravens. A thousand injuries they will suffer. Edgar Allan Poe evermore.” The 2004 note seemed to have political undertones, criticizing the French opposition to the Iraq war: “The sacred memory of Poe and his final resting place is no place for French cognac. With great reluctance but for respect for family tradition the cognac is placed. The memory of Poe shall live evermore!”

Perhaps the sons were a little shaky on the appropriate sentiments to be left on the grave of one of the country’s most famous literary icons, but these missteps can be overlooked. The surrender of a long-held tradition, however, cannot.
I can only hope for one scenario, these last two years: The toaster’s sons have sat in their warm homes, sheltered from the blustering winds and winter temperatures, their coats in their closets, an open bottle of cognac on the table and the roses left unpurchased. I like to envision the two sons struggling under insurmountable guilt and sadness at destroying the legacy of the father and, by association, the mysterious aura that has long surrounded Poe’s death. I hope that the sons have nightmares of Poe’s forgotten grave, their hearts beating quickly in terror. I hope that they can’t shake the feeling of their father’s disappointment, or perhaps they can’t ignore the quiet beating of his restless heart.
This, we can only hope, is the conclusion for those so fully intertwined with a Poe story.