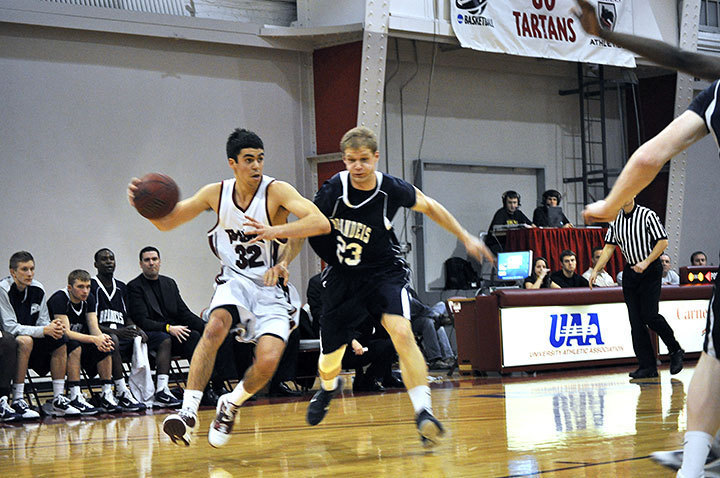 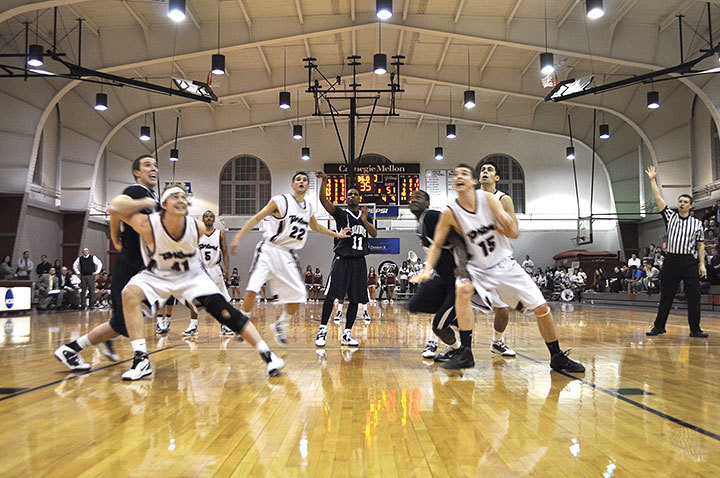 All it took was a block at the buzzer to secure a victory for the Tartans.

First-year Chris Manoli blocked the potential game-winning basket by the 13th-ranked Brandeis Judges with less than three seconds in the game, ending the battle at a score of 53–52 and giving the Tartans their fourth win of the season for a record of 4–8 overall and 1–1 in UAA. The game ended an 11-game win streak for the Judges, providing them with their season’s first loss.

The beginning of the first period was controlled by Brandeis, as the Tartans’ cold shooting performance led to a 21–13 deficit. The Tartans missed seven straight field goal attempts in that period.

But the Tartans would gain momentum, tying the score at 29–29 with 2:25 left in the half. The run was led by an offensive burst from the tremendously versatile Manoli, who hit two consecutive field goals during the run that led to the tie score.
After one half, the score was 34–31 in favor of the Brandeis Judges. It was a three-point shoot-out through one half of play, as both teams shot at an alarming rate from a distance.

The Tartans came out of the locker room re-energized after the half. They opened up a 12–3 run. With 7:12 left in the game, the Tartans held their largest lead, 46–38. But it was a strong defensive front during a 12-minute stretch that allowed the Tartans to build this momentum, where the Judges were held without a field goal.

After two free throws by junior Joe Kromka, the Judges made a run, outlasting the Tartans over the next six minutes, 12–4, tying the game at 50 with less than a minute remaining.

In the waning moments of the game, junior John Duhring assisted senior Shane Rife in transition to give the Tartans the lead.

That lead was quickly eliminated by the Judges’ Tyrone Hughes, who hit two free throws to tie the game at 52 with just 33.6 seconds remaining.

On the Tartans’ final possession, Manoli was fouled and converted just one of two free throws. He would make up for the miss with a clutch defensive play.

With the score now 53–52 Tartans, the Judges held the ball for the final possession. Ben Bartoldus of the Judges curled to the elbow for the potential game-winning shot with less than three seconds in the game, and Manoli stepped up to block the shot, ending the game and securing the victory for the Tartans.

Defense was the key in this victory, as it took every ounce of hustle on the defensive side of the ball to upset the No. 13 Brandeis Judges. The Tartans out-rebounded the Judges, 39–36, and a clutch defensive play by Manoli ensured a Tartan victory in the final moments of the game.

“Our effort on the defensive end was the difference for us in a big game like this,” first-year Sean Brophy said.

The superb perimeter shooting and balanced offensive attack also furnished the victory, as Manoli, Rife, and first-year Rashaun Riley all led the Tartans in scoring with 10 points each.