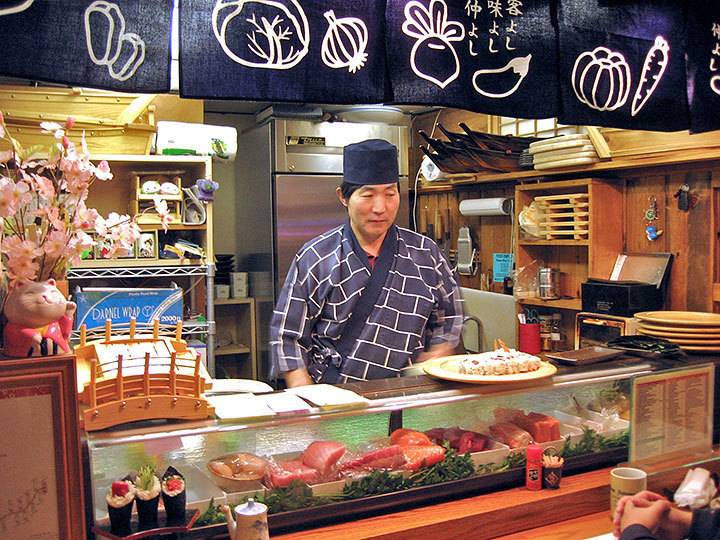 Chaya ships its fish fresh from New York and Japan, ensuring the best taste for its customers. (credit: Michelle Liu)

Just the way everyone has a favorite burger place or coffee spot, they also seem to have a different opinion on which is the best sushi restaurant. Pittsburgh, being the land-locked city that it is, doesn’t give too many options to choose from, and most students either settle for the boxed sushi available on campus or go without it, not knowing that one of the city’s best places, Chaya, is right up the street.

The nondescript windows facing out onto Murray Avenue leave this place known only to people who have sought the best sushi in Pittsburgh. A small restaurant, Chaya is barely able to hold 30 or so people and is packed on most nights of the week. The restaurant is warm and cozy, and the servers are quick to get the drinks while customers decide on their main course.

The menu is extensive, with traditional Japanese fare from appetizers to tempura to teriyaki to fish, ending with mochi for dessert. The sushi and sashimi menu is equally long and has a lot of variety. Beginning with appetizers, gyoza is a great place to start. This dish consists of pork and cabbage dumplings that are perfectly pan-fried, leaving just enough moisture to offset the crisp outside. Seaweed salad is a unique twist on the traditional garden salad and the grated seaweed leaves have much more texture than taste.

While ordering sushi, there are two ways to go about doing it. One can either get a combination platter or order from the a la carte menu. There are many different platters to choose from: deluxe and regular platters, as well as fish-specific platters to suit all desires. One of the favorites is the sushi boat, and it is recommended that at least three people share this dish. The tuna at Chaya is renowned for its flavor and tenderness, and it only takes one bite of the fish to realize that this is as fresh as fish gets in Pittsburgh and that it is really good. For a little kick, opt for the spicy tuna. To make it hot, a mayonnaise and chili pepper mix is daubed on the fish, adding just the right amount of spice to make this one of Chaya’s top orders.

The shrimp tempura roll is a combination of a piece of shrimp tempura, rolled in traditional sticky rice and covered in an addicting eel sauce. The shrimp is covered in batter and cooked to a golden hue, giving the roll a crispy texture, while the sweet eel sauce plays off the shrimp flavor, leaving the mouth watering for more.

Other notable rolls are the cucumber roll, California roll, and salmon roll. The cucumber roll is crunchy, and the cucumber slices are refreshing, so this choice is available for vegetarians or those who want some variety. The California roll is the standard starter sushi, and Chaya makes this combination of crab, cucumber, avocado, and fish egg well. Finally, the salmon roll, much like the tuna, is full of flavor. The salmon is easy to chew and goes well with a dab of soy sauce.

An important thing that one can tell from the sushi at Chaya is that it is fresh. Fumio Yasuzawa, the executive chef and owner of Chaya, ships his fish in from Japan and New York. He has a rule that fish should never be frozen but chilled on ice until served at the restaurant. Since the restaurant opened in 2001, word has gotten out about this place and there is usually a line waiting for a table. Surprisingly, the prices at the restaurant are quite affordable. Regular rolls cost no more than $5, and it is reasonable to expect to spend under $30 for a dinner for two. This is an unbeatable value for this quality of sushi.