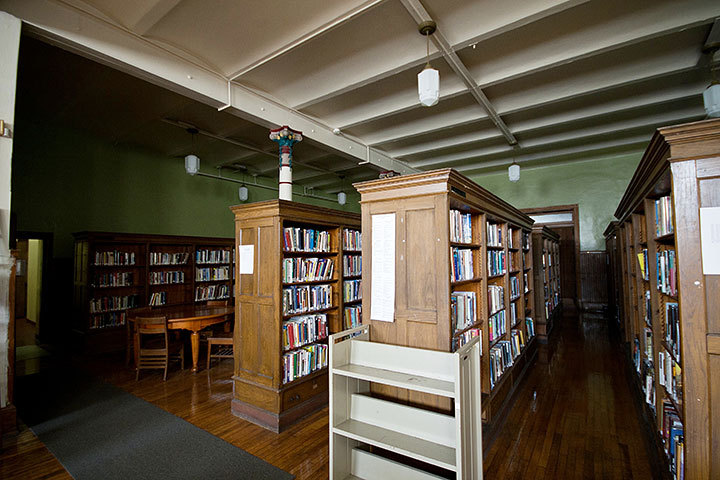 The Braddock library was the first Carnegie Library founded in the United States. (credit: Patrick Gage Kelley/Contributing Editor)
Editorials featured in the Forum section are solely the opinions of their individual authors.

The Pittsburgh area has more than its share of references to Andrew Carnegie, the great steel tycoon and philanthropist. Many of these, such as the Carnegie Museums and Carnegie Mellon University, attribute their founding to Carnegie’s funding. Similarly, the Carnegie Libraries of Pittsburgh trace their roots back to the philanthropist and his emphasis on learning. Carnegie funded the creation of thousands of libraries around the world, all of which were intended to be, as is engraved on the Carnegie Library in Oakland, “free to the people.” In the century since Carnegie lived, his libraries have been an enduring legacy, and they have improved people’s lives in ways that his other philanthropic efforts (even Carnegie Tech) have not even approached. Now, unfortunately, the Carnegie Library system in Pittsburgh is in crisis, as are other public libraries throughout the United States. But before we get into the details of today’s problems, a quick history lesson is in order.

Carnegie was born in Scotland, the son of a weaver, in the middle of the Industrial Revolution. The family immigrated to Allegheny (now Pittsburgh’s North Side), and Carnegie took his first job at 13, working constantly for the next five decades. Early in this time, Colonel James Anderson of Pittsburgh opened his personal library of 400 books to the “working boys” of the area. To Carnegie, this was heaven; he later described it in his autobiography as if “the windows were opened in the walls of my dungeon through which the light of knowledge streamed in.” He, along with his younger brother Thomas, frequented Anderson’s home, and thus, Carnegie believed access to information was the way for any man to motivate himself and succeed in the world.

So, 50 years later, as Carnegie neared retirement, he came up with a method to spread free libraries across the world. He launched this method to donate funding to cities meeting his four requirements: They could prove the need for a library, provide land for the library, provide (generally through taxes) money to afford the operating costs, and offer free service to all — so that 13-year-old boys could become millionaires. In this way, Carnegie spread about 2,500 libraries across the world, 19 of which are still operating in Pittsburgh.

This and other stories were part of the history of Carnegie’s library-related philanthropy that was recounted by writer Karen Lillis on a tour of the libraries in Pittsburgh, part of the Small Press Festival that is going on this month in the city.

As Carnegie’s base, Pittsburgh provides some of his earliest experiments in free libraries. The Braddock library was the first Carnegie Library to open in America and was part of the library tour. Complete with a music hall, bathhouse, gymnasium, and swimming pool, the libraries that Carnegie imagined were not just shelves of books but true centers for education and the community. And while Braddock has re-imagined the spaces that fell into disrepair in the mid-1900s — the bathhouse has become a ceramics studio, the swimming pool has been used as a performance space, and much of the third floor has been converted into a computer lab and screen-printing studio — these libraries must continue to be funded and supported by their communities as they continue to serve and educate the people that support them.

Just this weekend, the Music Hall at the Homestead library hosted Owen Pallett and the National, and the hipsters in their plaid shirts and tight jeans got drinks at the bar (set up in one of the library’s community rooms — complete with shuffleboard courts in the floors). Earlier in the day there were likely dozens of people swimming in Homestead’s still-functional swimming pool, workers constructing a new second-floor coffee shop, and, of course, local residents visiting and reading books. These hundred-year-old libraries are institutions in this city, and they must be supported.
We know that libraries are evolving. One hundred years ago the stacks were closed, and you had to ask a librarian for the book you wanted to see; they would fetch it; you would read. Twenty years ago, libraries were starting to install computers and build up their CD and videocassette collections. Five years ago, they were beginning to open up to the idea of the library as a more general-purpose space; the Maggie Murph Cafe in our Hunt Library opened in 2006. The libraries of 10, 20, let alone 100 years from now are impossible to predict. Will we enter the space to acquire a temporary copy of a book on an e-reader? Will they become solely academic spaces? Community spaces? Completely digital? For now we continue to hope that there will always be a physical footprint, a hall of community growth, and free knowledge.