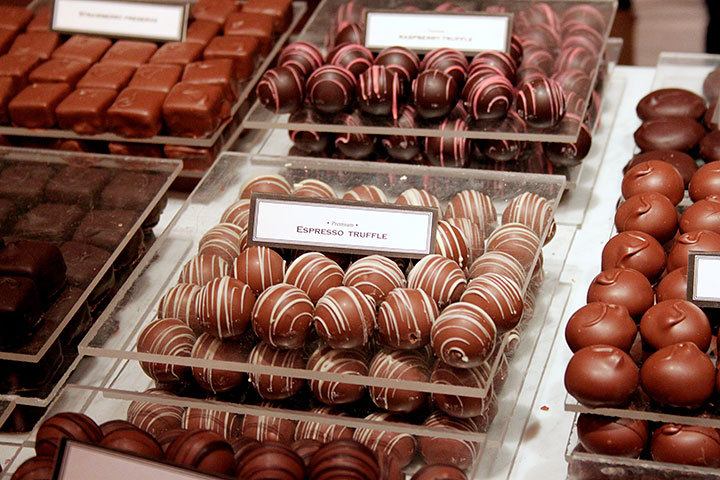 From the outside, the store has an antique storefront with a red and tan striped awning. Inside is a wall of chocolates, candies, and ice cream, elegantly displayed and waiting to be consumed.

Edward Marc Chocolatier supplies the store with high-quality chocolate — with no trans fat — in a large variety of flavors and nutty or fruity combinations. Underneath the chocolate display are shelves of candy, with the ice cream bars not too far away — all reminiscent of a mom-and-pop shop.

Customers can choose between over 50 milkshakes while they browse the beautiful and intricate chocolate displays. There are bouquets of chocolate flowers, candied apples, chocolates in the shapes of leaves, hearts, and even a beautiful, chocolate-molded scene of Pittsburgh.

The milkshakes — made with milk, ice cream, and your choice of syrup — are served old fashioned: in a malt glass with the leftover shake in a silver canister. Take a seat at one of the stylish marble tables and sip your treat as you decide how many boxes of candy to take home or which chocolate you should try next.

Think this experience is a pricey one? Wrong. On Wednesdays, the Milkshake Factory offers a happy hour where all 55 of their milkshake creations are only $2 and a brick of chocolate is on sale for half off the usual price. The owners are hoping the promotion brings in more customers from Carnegie Mellon.

“Most of the students who come in are from Duquesne or [University of] Pittsburgh,” said Mara Wertz, who works in marketing and operations for the Milkshake Factory but started off over a year ago behind the chocolate counter.

The milkshake menu is a recent addition — recent being within the last 36 years — but just this year a new milkshake flavor was added to the menu: peanut butter and jelly.

“We advertised through Facebook and Twitter and encouraged people to send in submissions for what our new milkshake flavor should be. After narrowing it down, the flavor peanut butter and jelly won,” Wertz said. This customer creation of flavors is not uncommon at the Milkshake Factory. One of the flavors is called “Inspiration,” which means you get to decide whatever combination of ice cream, syrups, and fruit or topping goes into your milkshake.

During the fall, the Milkshake Factory offers a seasonal flavor of ice cream — pumpkin — which is a favorite among the staff. “Whenever we get the pumpkin ice cream I always try to keep it in the store as long as I can. It’s so good,” Wertz said.

“It sounds like such a great store,” said Lexus Beaman, a junior psychology major and resident assistant. “I’ve never been there, but after hearing about it I definitely want to go and take some residents with me. I love chocolate, too.”

With its attractive candy and chocolate display and milkshake bar, the fashionable store makes dessert an experience. A television screen over the chocolate display shows programs from the ’30s, ’40s, and ’50s, such as I Love Lucy episodes or Shirley Temple movies. They also serve tasty hot chocolate — the kind that has real chocolate in it, not just powder and water.

“I think if it were closer to campus, a lot more students from Carnegie Mellon would go visit the Milkshake Factory,” said Dan Chow, a junior design major. “Ever since Dozen [Bake Shop] moved to Craig Street, I’ve seen students eating [their cupcakes] all the time. Now that I know where this place is, I really want to spread the word and get people there. [The] South Side’s a great place to explore for students anyways.”