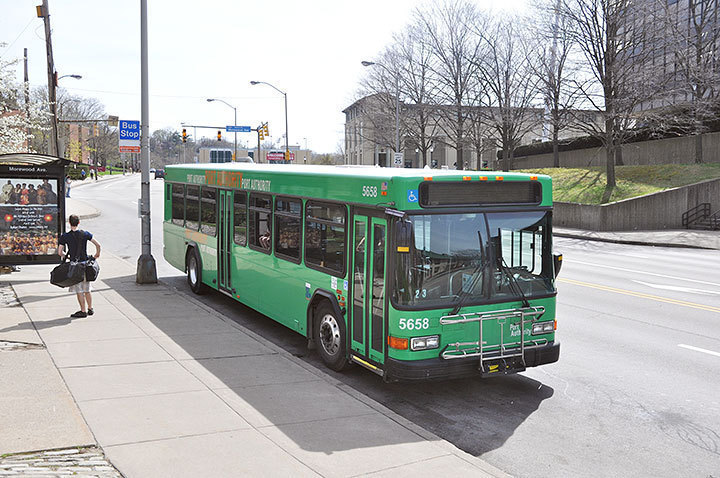 The Port Authority has adjusted many of its current lines with the goal of further developing the transit system. (credit: Michael Kahn/Forum Editor)

Sunday’s changes represented the first service modifications carried out under the authority’s new development plan, the result of an 18-month study announced in June 2007. The study included public open houses and hearings, and it garnered more than 5000 comments from residents.

Port Authority CEO Stephen Bland said in a February Rider Report that the authority hadn’t experienced such an overhaul in about 50 years, but that it was required now for a variety of reasons. “Riders and leaders repeatedly have called for better transit options — something more convenient, efficient, and easier to understand,” he stated. “The state funding formula adopted two years ago requires us to pursue a more efficient system.”

Several routes passing near the Carnegie Mellon campus were affected by Sunday’s realignment.

The popular 59U route, previously serving the SouthSide Works at one end and the Waterfront at the other, has been split into a separate route for each endpoint. A new 75 bus now runs between Bakery Square in East Liberty and the SouthSide Works via Fifth Avenue, with the closest campus-area stop at Fifth Avenue and Craig Street. Meanwhile, the existing 61D on Forbes Avenue has been re-routed to serve the Waterfront, with the campus stops remaining the same. Riders from north of campus can also reach the Waterfront via the new 64 route, which replaces the 64A and travels from Lawrenceville via Bloomfield, Friendship, Shadyside, and Squirrel Hill.

Airport service from Carnegie Mellon is still provided by the 28X, but its new route no longer passes through Robinson Town Center. Instead, those coming from Oakland can ride1 the G2, labeled “West Busway–Oakland,” to the shopping center.

Despite the numerous changes across the county, Bland stressed that the Transit Development Plan was a simplification and not a reduction in service.
“We’re simply matching demand with service,” he said. “The number of weekday bus trips, for example, will increase by 6 percent even though the number of overall routes will drop from 186 to 122.”

While many have expressed concern over the changes, specifically the removal of the the 59U route, students have generally responded positively to the re-routing of lines.

“I think this could be a very positive change,” said Peter Versteeg, a doctoral candidate in the engineering and public policy department.

“Bus systems sometimes aren’t used as much as they should be. Transit systems cost the city a lot of money, so citizens should really be taking advantage of the bus lines. I could see how it could be frustrating and inconvenient to change your route, but in general, I think it can only be a good thing.”

After this week’s route changes, the Transit Development Plan calls for several more rounds of service updates over the next two years.
Among the planned additions is a new Rapid Bus service — similar to concepts in place in Boston, Los Angeles, and Cleveland — featuring fewer stops and simpler routes for faster travel. Rapid Bus is set to be phased in on the 28X, 61 series, and 71 series routes, but a statement by the Port Authority said that conversion to the system would depend on funding and planning coordination with the Pittsburgh city government.

In the meantime, campus-area riders will see an increase in the frequency of 61A and 61B buses.

For a full list of Sunday’s service changes and an overall picture of the post-Transit Development Plan bus routes, see the Port Authority’s website at http://www.portauthority.org/PAAC/CustomerInfo/RouteChanges/tabid/512/Default.aspx.

The website also allows visitors to sign up for e-mail alerts for when specific routes change in the future.
A second round of transportation changes from the Port Authority is due in June.