Excitement and surprise meet at Sweepstakes 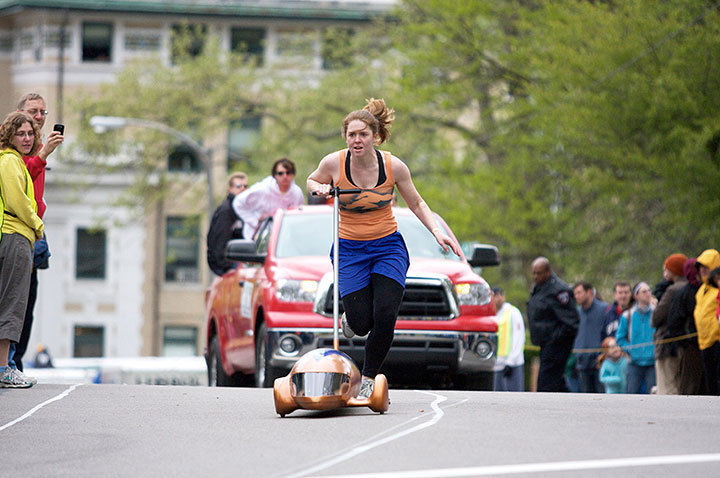 A female pusher from Fringe guides her buggy along the course near the top of Hill 2. (credit: Travis Wolfe/Photo Staff) 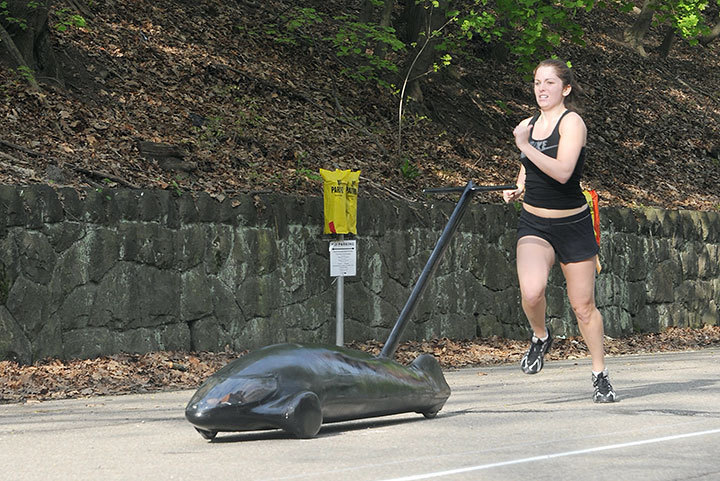 A female pusher for PiKA makes her way up the incline of Hill 5. (credit: Kristen Severson/Publisher) 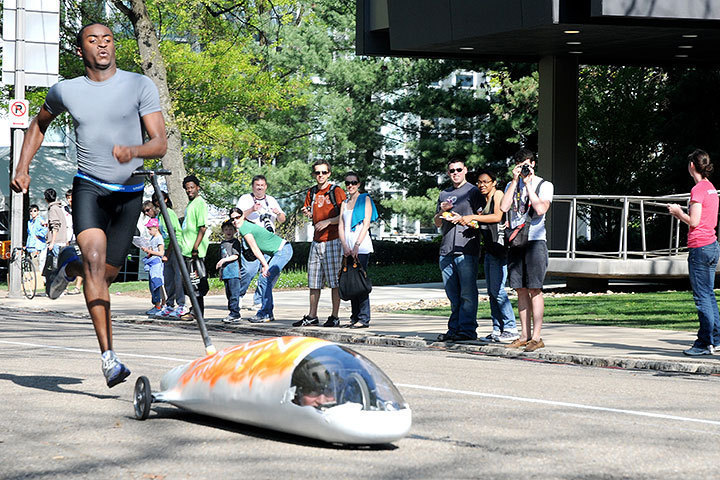 A SPIRIT pusher sprints toward the finish line on Hill 5. (credit: Kristen Severson/Publisher) 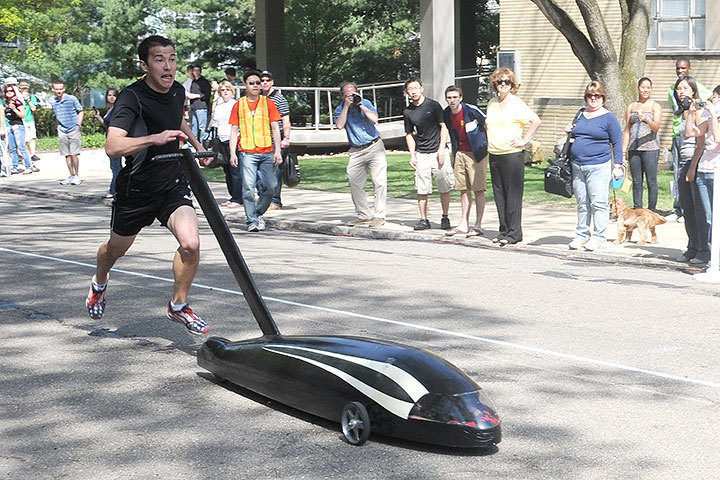 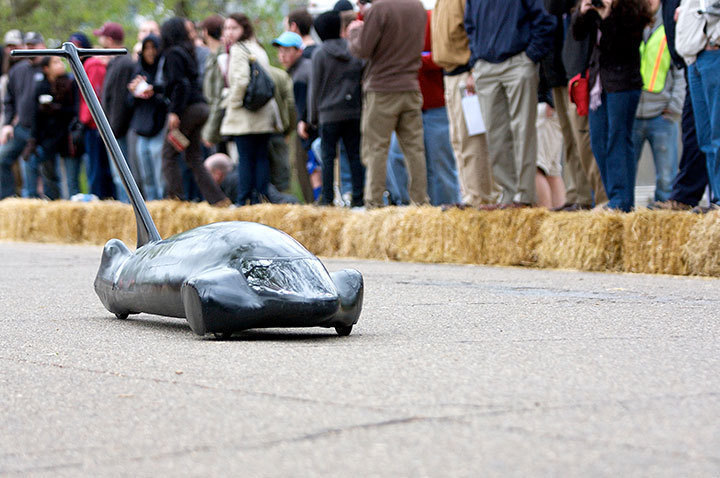 Every year, crowds line the edges of the Sweepstakes course to support the competition’s participants. (credit: Travis Wolfe/Photo Staff)

Friday was the start of the 91st annual Sweepstakes competition, one of Carnegie Mellon’s unique traditions. Sweepstakes — or Buggy, as it is more commonly known — brings together both Greek houses and independent organizations in a combination of engineering and athleticism. Teams build small racing vehicles, known as buggies, that are pushed and driven around a 0.9-mile course between Margaret Morrison Carnegie Hall and Schenley Park.

This year’s rolls were punctuated by numerous mechanical problems, logistical difficulties, and surprising disqualifications on both days. The final result after Saturday’s finals had Fringe taking the top spot in both the men’s and women’s races.

More than 50 teams took to the course during preliminary rounds Friday, a day marked by numerous mechanical problems and disqualifications. In total, eight teams failed to cross the finish line, and three were granted re-rolls after problems in their initial races.

Problems began early, as the women’s heats saw two disqualifications and three spinouts. In the seventh heat, spinouts claimed both the SPIRIT C and Sigma Phi Epsilon (Sig Ep) A women’s buggies, leaving Student Dormitory Council (SDC) A to finish the race alone. SPIRIT in particular had a tough morning, as only one of the group’s three women’s teams crossed the finish line. The surviving A team finished eighth with a time of 2:55.17. Overall, the group’s buggies lost three wheels in various Friday heats.

Kory McDonald, SPIRIT Buggy chair and junior mechanical engineering major, explained that SPIRIT was “working on new things and trying to push the limit this year.” “Unfortunately,” he said, “some things didn’t come together in the end. What we saw in practice just didn’t come through on race day.”

“It’s kind of sad,” said Richard Halstead, a master’s student in electrical and computer engineering who pushes for the CIA B men’s team, “because they used to be really competitive — and their teams still are, I think — but they seem to consistently screw up on the freeroll.”

The CIA women’s teams also suffered from logistical problems. The A team was disqualified for having an apparent pacer alongside the course. The B team did not complete its race when the team’s flagger signaled driver and junior architecture major Annemarie Malbon to stop following the SPIRIT B crash. The team was granted a re-roll on Saturday and finished with a time of 3:31.58.

“I guess the women’s heats did go pretty badly. Usually there’s only one or two crashes per day,” Halstead said.

The more numerous men’s heats had their share of difficulties as well. PiKA D was disqualified due to interference at the beginning of the heat against Sig Ep A. Later, an impact between SDC C and PiKA A led to a disqualification for SDC C on the basis of reckless driving following an unintentional collision. SPIRIT’s men’s teams again suffered mechanical problems, as both the A and C teams’ buggies spun out in the Chute — the fast turn from Schenley Drive onto Frew Street — and did not finish their races. Sigma Nu B also did not complete its race due to a spinout.

Racing in the final heat of the prelims, SDC A driver and senior English major Michelle Mirabella fishtailed on her turn into the Chute, but quick work by pushers Devin Murray, a senior mechanical engineering major; Evan Korol, a junior philosophy, statistics, and SHS student; and Casey Piper, a junior H&SS interdisciplinary student, on Hills 3 through 5 still scored the team a first-place finish for the day. SDC A’s preliminary time of 2:04.61 left them two seconds ahead of the nearest competition, Fringe A, and missed the all-time course record, set by the same team last year, by 1.31 seconds. Fringe A (2:06.55) and SDC B (2:07.85) rounded out the men’s top three. Sig Ep A, PiKA A, PiKA B, Fringe C, Fringe B, Sig Ep B, and Sigma Nu A also advanced to Saturday’s finals.

Teams in the final races Saturday morning faced cold and gray weather, with temperatures in the mid-40s after a drop of nearly 30 degrees from the previous day. The colder temperatures meant a much smaller crowd than usual for Buggy finals races. “The energy level is a lot lower because it’s dreary and cold,” said Sara Wingen, a senior psychology major and pusher for Fringe A. The weather also hindered the teams’ performances during races. “The weather definitely affected the speeds and times that we saw,” McDonald commented.

The day also started with a major upset: SDC, the leading contender for both the men’s and women’s races, was disqualified from competition for violation of a safety code. Julian Kessler, the organization’s Buggy chair, announced in a short statement that all SDC teams had been disqualified after a fire marshal noticed a propane tank in or near the organization’s truck. Sweepstakes head judge Andrew Hundt declared the group ineligible for competition Saturday.

With SDC out of the race, the field was left wide open for the other contenders. Only three of the six women’s teams remained in the finals. Fringe and PiKA became the two remaining contenders in the second day of races, with Fringe A taking the top spot with a time of 2:40.59, and PiKA A coming in second with a time of 2:47.38. Fringe B rounded out the women’s races, finishing a close third at 2:48.53.

Although the weather had an impact on attendance and crowd excitement during the final races this year, there were still many lighthearted moments. The exhibition races at the start of the day saw many alumni in a spirited mood as they re-took their previous roles as buggy pushers and drivers. Sigma Nu’s class of 1985 cheered as they celebrated victory in their 1985 grudge match against PiKA.

Others at the races also commented on having a good time. “Buggy embodies all that is amazing about CMU. You take something simple and put CMU students on it, and it becomes absolutely amazing and ridiculous,” 2008 CIT alumnus Doug Robl said. “It has something for everyone,” said civil engineering master’s student Mary Ashe, a pusher for SDC. “It’s nerdy and athletic and has a little bit of everything. It’s a great thing to be a part of.” McDonald added, “It’s an awesome combination of invention, collaboration, and innovation, and a great show of school spirit.”