The Cutoff Man: Jumping off the bandwagon 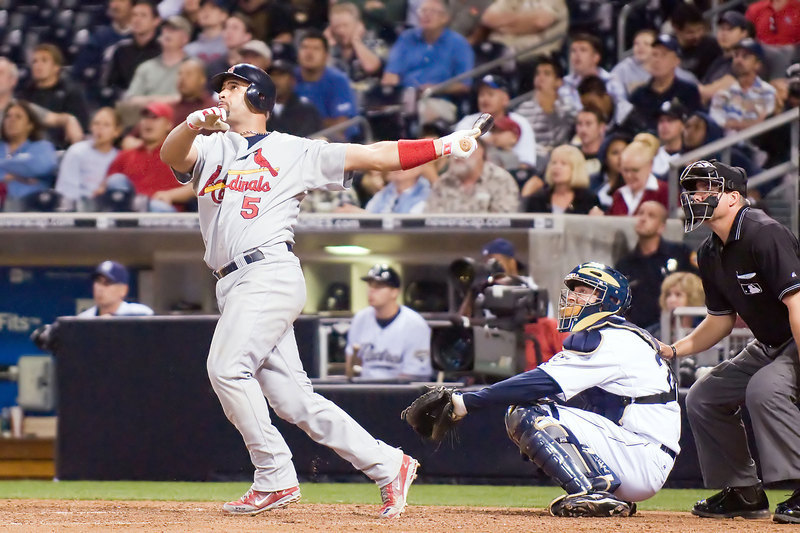 Albert Pujols of the Cardinals goes for a homer. (credit: Courtesy of Wikimedia Commons )

The first time I realized that ESPN was starting to get annoying was when I heard the following sentence actually read aloud on SportsCenter after Opening Day 2002:

“His two home runs put him on pace for 324, which would absolutely smash Barry Bonds’ single-season record.”
The Pirates’ Garrett Jones, the Blue Jays’ Vernon Wells, and the Cardinals’ Albert Pujols were among those with two home runs on Opening Day 2010. Jones and Wells both homered in their second game of the season as well, and Wells even homered a third consecutive day to give him quite an opening series.

Time, folks, to hold onto your hats, take a deep breath, and put away your record books. I won’t lie, I’d take a homer per day any day of the week and twice on Saturday (though they never schedule doubleheaders anymore). Even a homer every other day would be nice. But we know that won’t happen.

Wells’ projected home run pace dropped from 324 to 243 to 216 through those monstrous first three games, and after Saturday’s game was at a “mere” 129. His performance last week will be enough to earn him a starting spot in this year’s All-Star Game, especially with the voting seemingly starting earlier and earlier; mark my words, you will see the word “VOTE” splattered all over MLB.com come next week, perhaps earlier. Remember, folks: This time it counts.

Any baseball fan old enough to remember 2006 will recognize the name Chris Shelton, most recently of cut-from-the-Astros-in-spring-training fame. Shelton began the 2006 season as Detroit’s starting first baseman and took the American League Central by storm, becoming the first AL player ever to hit nine homers in his first 13 games. He received a plethora of early All-Star votes as everyone in baseball wondered who this guy was and where he came from.

Turns out he came from right where he ended back up that very July: the minors. He ended up hitting only 16 homers, with 102 hits and 107 strikeouts.

Wells, Jones, and Pujols should all have impressive numbers come the end of the season. After down years in 2008 and 2009, Wells seems to have regained his power stroke at least for now and will probably end up around 28 to 34 homers and right around 100 runs batted in. Albert Pujols will always be King Albert and there is no reason that he won’t one day win a Triple Crown. Jones will probably keep up pretty consistent production, but the league still has a bit of time to fully figure him out. I still expect a breakout season overall, even if he finishes it with another team — he is on the Pirates, after all, where no one succeeding is ever safe.

Short hops: Speaking of the Pirates, wins on Monday and Wednesday gave them their first 2–0 start since 2007. They then lost their next two games before winning Saturday to clinch at least a .500 mark in their first week of play. While it isn’t quite the Royals’ 9–0 start to the 2003 season, it’s something. The Mets are already partying like it’s 2009, leaving a combined 28 runners on base in their three losses through Saturday

It was a somewhat even start to the year, as only one team — the San Francisco Giants — had a perfect record after only four games.

Tune in next week and check out [ITAL]http://dailyjakjob.blogspot.com[ITAL] for daily updates on the happenings in Major League Baseball.