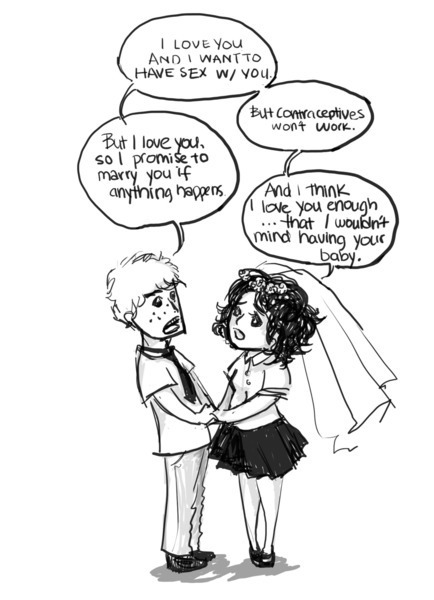 Credit: Frances Soong/Art Staff
Editorials featured in the Forum section are solely the opinions of their individual authors.

In a surprising and yet not-so-surprising move, the government in its new health care bill decided to include $250 million in abstinence-only education funding.

Why is it surprising? Well, this bill is being called a liberal bill and it was passed almost solely by Democrats, yet it contains perhaps one of the most conservative ideas about education.

Further, the Planned Parenthood website, which seems to be slightly out-of-date regarding this issue, claims that “President Obama’s 2010 budget will end funding for ineffective abstinence-only programs and provide $178 million for evidence-based sex education programs that prevent teen pregnancy” (www.plannedparenthoodaction.org/positions/fighting-real-sex-education-97.htm).

As a conservative, I’ll be the first to admit that I don’t usually support Obama’s initiatives, but this one had promise. Educating teenagers about their bodies and how to protect them is a great idea. Instead of following through with this promising idea, though, the administration decided to go in the opposite direction, choosing instead to provide funding for abstinence-only education.

Unfortunately, though, this move can’t be all that surprising to anyone. For years, the government has been providing extra funding to schools that promise to teach abstinence-only sex education.

Has this solved any of our teen pregnancy problems? No. Is it likely to stop teenagers from having sex? No, probably not.

Regardless of what you tell — or don’t tell — teenagers in school about sex, they will continue to make their own choices about their bodies. Since this is the case, and since a vast majority (some sources cite over 70 percent) of teenagers do decide to have sex, it is important that we teach them about proper contraception and all of the risks involved with making this decision.

In arguing for comprehensive sex education in schools, no one is trying to encourage teenagers to have sex. They don’t need anyone to encourage them.
The point of this kind of sex education is to inform teenagers about the possible risks of being sexually active and to educate them about methods of birth control and sexually transmitted infection (STI) protection.

Without this kind of sex education, we cannot expect teen pregnancy or teen STI rates to decline.

If we do not educate teenagers about safe sex, we cannot properly protect them from the dangers that sex presents. These dangers and risks include pregnancy and STIs — including HIV/AIDS — in addition to possible emotional and psychological complications resulting from having sex when they aren’t ready.

We cannot go on assuming that teenagers won’t have sex because we tell them they shouldn’t. That hasn’t stopped them before, and it won’t stop them now.

Funding abstinence-only education programs is a waste of our money. Further, it only hurts our entire society to allow teenagers to engage in sexual activity — including and going beyond intercourse — without being aware of how they can do it safely.

Some proponents of comprehensive sex education advocate using funding to provide teenagers with free condoms and other forms of contraception, but I think this goes a little too far. Schools should not provide free birth control to their students, but they should not withhold information about contraception that might benefit students. This includes information about where they can go to get free or inexpensive contraception, like Planned Parenthood or other local clinics.

If we don’t teach teens about sex, they’ll get their information from less reliable sources, like the Internet, magazines, and TV. What will they learn from these sources? Likely not the same things they would learn from experts.

Magazines like Cosmopolitan urge readers to try out new sex tricks on their significant others, and cable networks are full of sexual content. There are several TV shows that focus on teen parenthood, both factual (MTV’s Teen Mom and 16 and Pregnant) and fictional (ABC Family’s The Secret Life of an American Teenager). If teenagers watch these shows in lieu of proper sex education, they may get the wrong idea about sex. Some of these shows glamorize teen parenthood in ways that factual information would not.

Teenagers are going to learn about sex and be aware of all of the good aspects that these sources will show them, but they will be uneducated about the risks and possible pitfalls of sexual activity.

By keeping the focus on not having sex rather than on how to have it safely, teen pregnancy rates will not decrease as intended. Comprehensive sex education would likely reduce the rate of teen pregnancy as well as the risk of teens and young adults acquiring STIs.

Sex is everywhere. Teenagers will be exposed to it, whether or not we teach it to them. The question is where we want them to learn about it, and from whom.