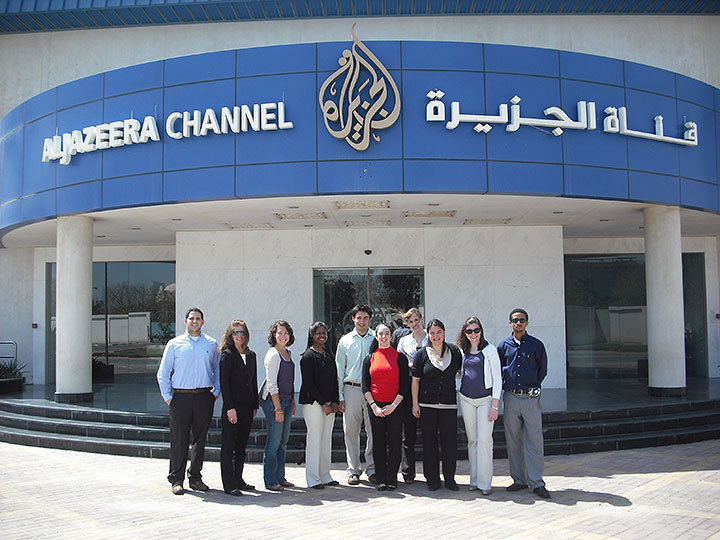 Eight Carnegie Mellon students experienced life on our Qatar sister campus this spring break. The students traveled to the Carnegie Mellon campus in Doha, Qatar to spend their time immersing themselves in its culture, acquainting themselves with the student body there, and developing ways to bridge the gap between the Qatar and Pittsburgh campuses.

“It definitely was the best trip I’ve ever experienced,” said Tarik Raed, a junior business administration major and one of this year’s participants.

The trip is part of the Carnegie Mellon Initiating Meaningful Pittsburgh and Qatar Ties (IMPAQT) program, sponsored by the Qatar Foundation and the Division of Student Affairs at Carnegie Mellon in Pittsburgh. The Qatar Foundation is a privately chartered nonprofit organization founded in Qatar in 1995 by Emir Sheikh Hamad bin Khalifa Al Thani. The foundation funds education, science, and community development initiatives, and was the enabling force behind the formation of Education City, the collection of Qatar campuses of which Carnegie Mellon is a part.

Founded in fall 2008, the IMPAQT program sends eight students to the campus each spring break to strengthen Pittsburgh’s relationship with the Qatar community. Throughout the trip, the students learn all they can and bring it back to Pittsburgh in the form of cross-campus collaboration projects.

To learn about the culture of Qatar, the students were encouraged to completely immerse themselves within the local community.
“While there, we took part in QALTA, which can be equated to CMU-Pittsburgh’s Summit, except it takes place after spring break,” said Eda Akyar, a junior Science and Humanities Scholar and one of the program’s participants. “Some activities included Middle Eastern cooking, dancing, games, fashion, instruments, calligraphy, and henna.”

Bahati Mutisya, a junior business major and one of this year’s participants, is a dancing enthusiast and especially enjoyed the dance lessons, which included bhangra, belly dancing, and dabke dancing. She also took a lot from the sessions held.

“During the QALTA class called ‘Breaking Stereotypes,’ we talked about the misconceptions of the Middle East and the Western world,” Mutisya said. “We also learned the differences between their religion and their culture during the ‘Islamic Feminism’ session.”

In terms of their most memorable moments in Qatar, Raed, Mutisya, and Akyar all agreed that this was in their time spent with the Qatar students.

“One of my favorite moments was the first night,” Raed said. “The eight of us were sitting at a long table with 15 Qatari students, and we were all just firing questions at each other about everything in our cultures.”

Raed, Akyar, and Mutisya all said that the Qatar students were one of the most hospitable groups of people they had ever met. Raed added that their English was practically “flawless.”

While in Doha, the students were also able to explore the city outside of the campus. “We had the opportunity to do some fun activities off campus such as sand-duning, or ‘sand-bashing’ as the students in Qatar call it; tour Al-Jazeera; walk around in the souk; visit Fanar, which is the Islamic Cultural Center; tour the ASPIRE sports complex; and visit the Islamic art museum,” Akyar said.

The last night of the program, the students spent the night with families of the Qatar students. The women in the group experienced a home stay while the men spent a night out in the desert.

Despite cultural differences, Raed spoke of the similarities he experienced with the students.“They’re just like us,” he said. “In terms of what is on their iPods, what movies they watch, and what music they listen to, it was shocking to me just how similar we are.”

Past participants are in constant collaboration, as they all work on forming their own projects that help unite the campuses. Last year’s projects included an orientation event at The Frame to show incoming Pittsburgh students part of the culture of Qatar, a photo installation in Morewood showing images of Carnegie Mellon’s Qatar campus, and a seminar and lunch discussion for Ph.D. students considering research in Qatar.

Students participating in IMPAQT consistently mention the lessons they learned from traveling to Qatar, as well as creating projects with their fellow students.

“I could not have learned what I learned in a classroom or from a book. It was an eye-opening experience,” Mutisya said.
Applications for the 2011 IMPAQT program will be available in the fall.