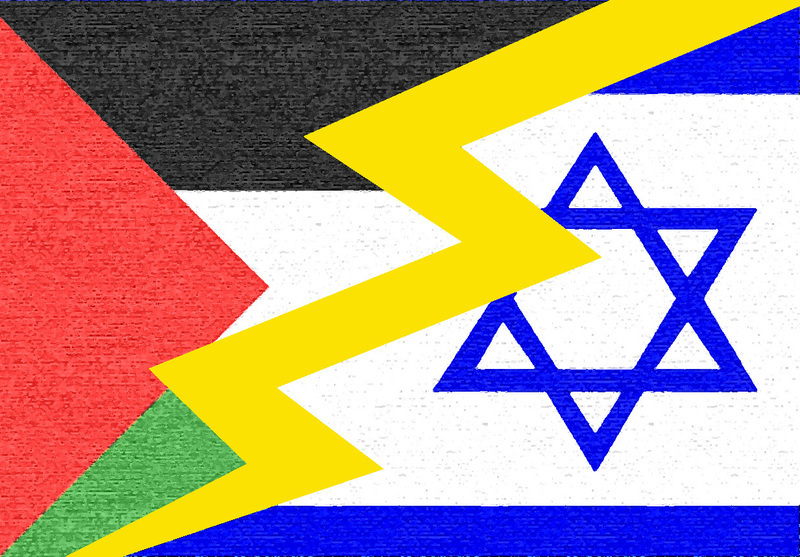 Credit: Maria Raffaele/Art Editor
Editorials featured in the Forum section are solely the opinions of their individual authors.

Among the foreign policy dilemmas faced by United States presidents for the last 50 years, that of Israel and Palestine seems among the most intractable.
Republicans and Democrats alike have tried to bring the two sides of the conflict together, sometimes reaching agreements but often watching their best efforts come to naught. Groups in both the Israeli and Arab leadership want peace, but conservative factions of both consistently ruin any chance of a solution. Peace in the Middle East is possible, though it is still many years away. But peace will remain a dream if politics like the ones seen in the past two weeks take precedence over a long-term solution — especially if these challenges are not turned to opportunities.

To follow the events that led up to the current state of American-Israeli relations, some background is necessary. In recent weeks, President Obama has taken the first steps in his attempt at establishing peace in the region. Vice President Biden flew to the Middle East to speak with Israeli and Palestinian leaders and start the first of what would be many rounds of shuttle diplomacy — where a third-party diplomat travels back and forth between two sides in a dispute. While peace was by no means in sight, it seemed like progress could indeed be made.

This initiative seemed relatively standard for the peace process. A U.S. President started diplomatic efforts, leaders on both sides maintained their desire for peace while sticking to their talking points, and most people’s expectations were for more of the same back-and-forth bickering that the last several decades have brought, possibly ending in an agreement of some sort.

But something unexpected happened during Biden’s visit.

On March 8, the Vice President arrived in Israel. A day later, Israel announced the building of 1600 new houses in a West Bank settlement. This announcement violated promises made to American diplomats and threatened to overshadow Biden’s visit. The outrage that resulted from this affront to the United States and the Palestinian Authority — from the timing as much as the content — overwhelmed Israeli expectations. Israel’s prime minister, Benjamin Netanyahu, failed at his first attempts at damage control when he painted the announcement as a coincidence. Since then, diplomats have been trying to repair the political crisis between allies. Instead of working toward a peace settlement with the Palestinians, Israel has to work on relations with its closest ally and its own government.

The current tension between the United States and Israel was a result primarily of internal Israeli politics. It is these politics — both of Israelis and Palestinians alike — which pose the greatest threat to a promise of long-term peace. Israel’s ruling coalition is currently dominated by conservatives. Some are moderate, like Netanyahu, while others are farther to the right, like Minister of Foreign Affairs Avigdor Lieberman. As a result, the government is forced to take a strong stance against Palestinian claims simply to maintain its legitimacy. Too many concessions would destroy the relatively fragile coalition.

At the same time, President Obama needs to show resolve in foreign policy. Accepting too many of Israel’s conditions would remove any credibility he might have in the Arab world. He is looking to strike a delicate balance between establishing a committed alliance with Israel and allowing for a chance for progress in the peace process. Israel’s settlement announcement during Biden’s visit made this balance untenable. Obama’s peace plan was stalled literally before it began. The majority of the blame for this lies in the arrogance of the Israeli government, which abused its relationship with the United States to distract the peace process and strengthen a conservative coalition. Instead of strengthening this coalition, though, the recent actions have weakened it in the eyes of its own citizens, its allies, and the rest of the world.

Despite the widespread outrage that emerged over the settlement announcement, this diplomatic faux pas could be a blessing in disguise for all parties involved. Israel cannot hope to keep the United States at arm’s length for long, particularly with the threat of Iran nearby. The two sides must come closer, and Netanyahu’s conservative coalition is more likely to change than the Obama administration, which has many other more significant domestic and foreign concerns. A more moderate Israeli administration offers a better chance for peace agreements than the current one ever will. In the end, the conservatives’ tactic of undermining America may backfire.

Neither the United States nor Israel can succeed without the other. Israel needs America to guarantee its continued existence in the midst of hostile neighbors, and America needs Israel for its strategic value as a Middle East democracy. As much as this mutual dependence helps both nations, it also has its drawbacks, which the current controversy only illustrates.

One of America’s difficulties throughout the process of achieving peace in the region has been a perception that it is biased toward Israel. The United States gives huge amounts of foreign aid to the nation, including weapons and classified technology. Palestinian leaders have been hesitant to trust a mediator that may not have their best interests at heart. If America keeps pressuring Israel on foreign policy, it may improve the image of the United States in terms of its relationship with Palestine.

While it is easy to paint both the Israelis and Palestinians as simply intransigent and impulsive, no major decision on either side comes without costs and risks weighed in advance. Both peoples exist in a careful balance, one that is often violent but more often peaceful.

For there to be lasting peace, the majority on each side that wants it must take action. If both sides wait for the other to move first, the status quo will exist indefinitely. If the three governments involved truly want a solution, they will take this diplomatic mistake and turn it into a new beginning.