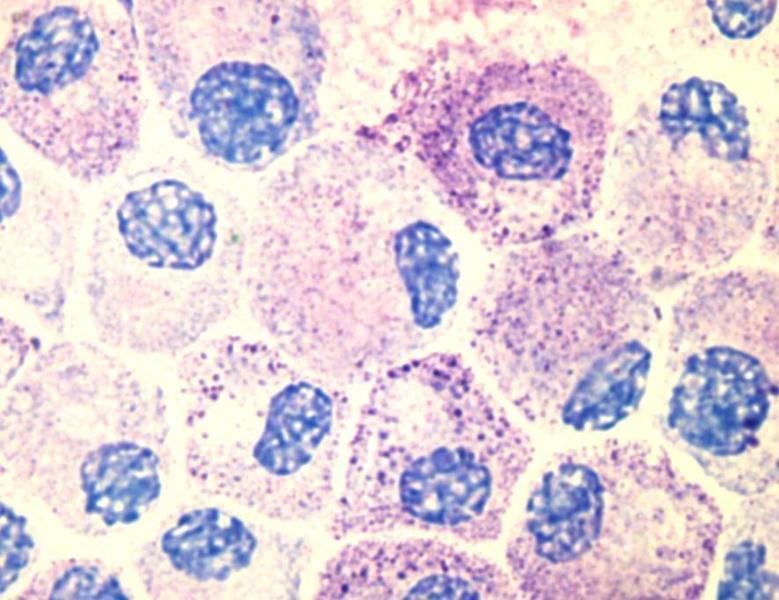 Mast cells can release histamines into the bloodstream and nearby tissues, which cause symptoms of an allergic reaction. (credit: Courtesy of Wikimedia Commons)

A 1981 article in the British Medical Journal describes three cases that had doctors perplexed. In all the cases, patients complained of severe irritation and itching after coming into contact of one the most ordinary substances on earth — water. Furthermore, there were no visible symptoms on the skin that could point toward the cause of the patients’ discomfort.

With no outward signs of an allergy, doctors were unsure as to what the exact cause of this strange condition was. In most cases, the itching was felt in the lower parts of the body, most notably the legs and thighs. Patients usually start noticing the symptoms after taking a bath. In one case that was reported in the British Medical Journal article, the patient was immersed in water at around 37°C for 15 minutes and started feeling itchy in the thighs about four minutes into the study.

After 15 minutes, the itch had spread to the patient’s back. In spite of the itches, there were no outward signs of allergy on the skin. The article goes on to describe that such symptoms were initially attributed to psychological disorders. Patients presenting such symptoms were considered “neurotic,” or these symptoms were attributed to individual personality disorders. It wasn’t until the 1980s that this disorder — now given the name of aquagenic pruritus — was considered a legitimate concern and discussed widely in medical literature.

Although the main cause of this condition still remains unknown, it does show similarities with common allergic reactions. Allergies are produced by abnormal reactions of the body’s immune system. Cells known as mast cells are the major players in an allergic reaction. Mast cells are located around blood vessels in most tissues. These cells have a number of granules inside them, which are small vesicles that contain a host of chemicals. Upon coming in contact with allergens, these granules release their chemicals into the bloodstream. This process is termed degranulation of the mast cells. One of the many chemicals released is histamine, which induces a number of reactions into the surrounding tissues that cause the symptoms of an allergy.

Skin biopsies of patients with aquagenic pruritus show that they have elevated levels of degranulated mast cells. In addition, blood tests in such patients revealed that the blood also had increased levels of histamine. What still intrigues physicians about this disorder is the aberrant physiology of patients with this allergy. High levels of histamine and degranulated cells are present in the skin even before the skin is immersed in water. Some have correlated this increase with an increase in sweating in the patients. Another puzzling factor about the disease is that there are no visible symptoms on the skin in spite of the involvement of histamine and the typical allergic reactions. Researchers believe that may be because histamine is released slowly from the cells. Also, it has been hypothesized that water on the outer layer of the skin, called the stratum corneum, may cause the absorption of molecules within the skin that leads to allergic reactions.

Since the exact cause of the disorder is not known, specific treatments for the disorder are also not known. Research is being conducted to find a method that may reduce or elminate symptoms of the allergy. Antihistamines have been known to provide relief to patients for many kinds of allergies. As stated in an article in the journal Hospital Physician, addition of alkaline compounds such as sodium bicarbonate to the water can also ease symptoms. Ultraviolet light therapy has also been known to help patients. Ultimately, only a combination of different therapies has been known to be effective.