Meat-packing industry has responsibility to reform 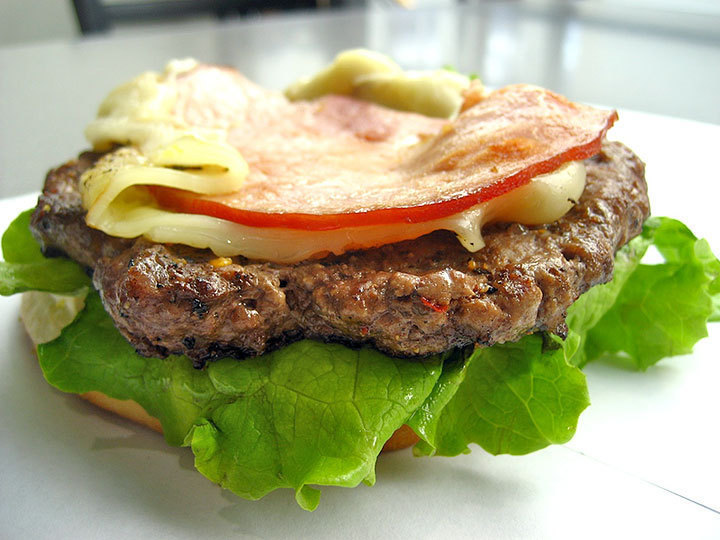 Since we were young, we were taught to recognize the common barnyard animals: A cow says “moo” and a pig says “oink,” and the two are by no means related to our hamburger dinner or our BLT sandwich. But at what point did these animals stop being animals and start being food?

We are in the midst of what many consider to be a green revolution; however, few seem to realize the true impact that meat production has on our environment and our bodies. If this nation were to realize these social, economic, and environmental impacts, we could consider possible industry and social reforms to improve the efficiency of meat production and, with this knowledge, stimulate change.

Very few individuals recognize the consequences that the meat-packing industry has had on our economy, environment, and society. As CNN correspondent Jonathan Sanfran Foe says in his article on All-creatures.org, “If the way we raise animals for food isn’t the most important problem in the world right now, it’s arguably the No. 1 cause of global warming: The United Nations reports the livestock business generates more greenhouse gas emissions than all forms of transportation combined.”

The meat industry is one of the largest in the world and, according to www.earthtrends.com, over 280 million metric tons of meat were produced in 2009 alone. Though it is one of the largest modern industries, the meat production process has also proven to be one of the most inefficient industries today. According to one estimate done by the United Nations Food and Agricultural Organization (FAO), the ratio of fossil-fuel energy needed to produce one unit of food energy is 35:1 for beef production, compared to 3:1 for all U.S. agricultural products combined.

As an economic industry, the meat industry is extremely inefficient. An Iowa State study estimated that the “external costs” of agricultural production in the United States — in terms of natural resources, wildlife and ecosystem biodiversity, and human health — amount to between $5.7 billion and $16.9 billion annually. Livestock production alone is estimated to contribute $714 million to $739 million in damages. The meat industry, when considered economically, is not only extremely expensive, but the majority of the money being spent is on waste and methods of production that have not been updated in years.

The production of livestock for meat harvest can be linked to almost every environmental catastrophe confronting our planet. Rainforest destruction, the spreading of deserts, the loss of fresh water, increasing air and water pollution, destructive acid rain, and soil erosion are all linked to the industrialized production of meat.

Possibly the most commonly understood side effect of the meat packing industry is the intense amounts of carbon dioxide released from the production of meat. The FAO has estimated that direct emissions from meat production account for about 18 percent of the world’s total greenhouse gas emissions.
But what can be done to prevent these terrifying statistics from growing? While it is true that global industry contributors could create more sustainable methods of livestock feeding and crop production, develop proper methods of manure and methane management, or enlist better grazing methods to prevent erosion, these improvements can only be implemented by industry heads. These leaders, more likely than not, are unwilling to act due to economic factors, and as a population we cannot rely on them.

The ball is in our court — it is up to the people to take control of this situation. With no higher powers to take on the responsibility, the typical Carnegie Mellon student is the one who needs to make a difference. The solution is easy: Cut down on meat consumption.

By eating lower on the food chain, individuals can reduce the amount of land needed to support their existence, thus minimizing their ecological footprint. If less land is cultivated for the production of crops or the grazing of livestock, that much more wilderness is left untouched. As a result there will be less soil erosion, less water pollution, less pesticide use, less carbon emission, and less energy use.

Even just cutting one’s meat consumption in half can be a personally healthy and seemingly effective way to minimize the impact of meat production.
Predictably enough, however, a plant-based diet is the best alternative. Plants are healthy for the body and a proper vegetarian diet has proven effective in reducing heart disease, cancer, and other diet-related diseases. However, while it may be the best solution, a society of vegetarians is largely unrealistic.

Keeping reality in mind, this is a plea from me to the students of Carnegie Mellon and the campus administration: Limit your meat consumption. As an individual you can cut out that burger for an Evgefstos! alternative maybe once or twice a week; even this small initiative will make a difference. Meanwhile, Carnegie Mellon may consider instituting a day of the week where Resnik only serves animal-friendly products. You may even choose to do more to cut meat out for some period of time. Whatever you choose, get educated. Research the subject, discuss it with friends, browse the Internet — when considering your next eco-alternative, remember this article. Change is before us but no one is going to hand it over; it’s up to us to reach out and grab it.