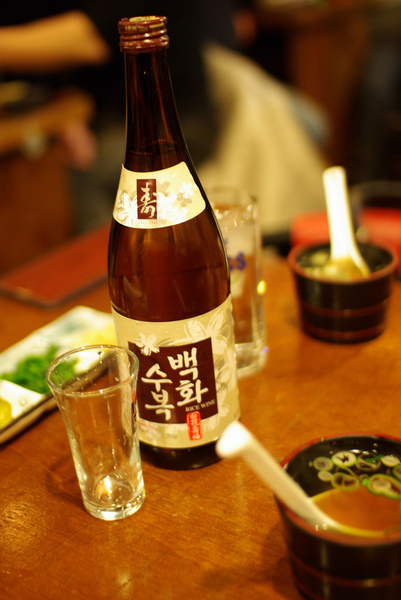 Alcohol Flush Reaction, commonly called “Asian glow,” is caused by a genetic mutation. Those affected are deficient in acetaldehyde dehydrogenase, which breaks down certain compounds in alcoholic beverages. (credit: Courtesy of Wikimedia Commons)

The infamous “Asian glow” is hard to ignore. With as little as half a can of beer, a person’s normal complexion can transform into a bright crimson tint. This condition is very unique in that only a small percentage of the population at large actually has it. Most common among Pan-Asians, “Asian glow” is formally called Alcohol Flush Reaction (AFR) and has some additional symptoms including nausea, light-headedness, and an increased heart rate.

Some people believe that “Asian glow” is some sort of alcohol allergy. However, this is only a myth. AFR is the collection of symptoms that a person gets when he or she is unable to process alcohol in the body. Rather than an allergy, it is a genetic trait. It is the effect of alcohol consumption by those who lack the capacity to metabolize acetaldehyde. Acetaldehyde is a chemical that the body converts alcohol into during the digestion process. Acetaldehyde dehydrogenase is an enzyme in the body that is supposed to break up this converted acetaldehyde into a non-toxic substance like acetic acid. However, when the substance is not converted, it can be extremely harmful for the body and even be 30 times more toxic than alcohol.

When there is acetaldehyde in a person’s body, the capillaries in his or her face and neck are heavily dilated, causing a deep reddening that is shown on the surface of the skin. People with AFR may also experience a heavier hangover because acetaldehyde is also the primary cause of this morning-after alcohol induced headache. However, when there is less acetaldehyde in a person’s body, it means that most of it has been metabolized into acetic acid, which is relatively harmless.

It is mostly Asians that have this problem because of a genetic mutation in the Pan-Asian community that has descended through time. Those with AFR usually have a variation in their genes that make them deficient in ALDH2, which codes for acetaldehyde dehydrogenase.

This condition is inherited from one or both parents and is so pervasive because it is a dominant trait. In fact, about half of all Japanese, Chinese, Korean, Taiwanese, and Vietnamese populations have this mutated gene. Even when some Pan-Asians have enough ALDH2, the mutated enzyme is still there. In this case, the AFR symptoms are less dramatic and will usually leave the intoxicated individual looking flushed with other mild symptoms.

Excess acetaldehyde in the body can have detrimental effects. For one, those with AFR feel the same side effects of alcohol intoxication as any other person, such as dizziness, talkativeness, slurred speech, nausea, vomiting, and the ever-famous hangover. However, those with AFR have additional symptoms, such as a sudden raise in heart rate, and some people’s skin even starts to swell. It is important not to mistake the unique symptoms of AFR with the assumption that those people are just more easily inebriated.

Another serious problem associated with AFR is the increased likelihood of getting cancer. Because acetaldehyde is extremely carcinogenic, the likelihood of getting cancer after prolonged exposure is very high. Philip Brooks, a researcher at the National Institute on Alcohol Abuse and Alcoholism in the United States, recommends that doctors educate their patients about the link between AFR and cancer, so people who have this reaction can take early preventive actions. For example, those with AFR may increase their chances of getting cancer by up to 600 percent by consuming about two cans of beer per day. However, not all side effects are bad. For example, those with this condition are less likely to become alcoholics.

Despite these many serious side-effects of AFR, the cures for this condition remain unknown. This has a great deal to do with the lack of randomized studies. Some suggest that taking Zantac and other such heartburn medication containing the drug Ranitidine may slightly mitigate the effects of AFR. Although some people have written off this reaction as a lifelong problem they just have to deal with, others have suggested that the repeated use of alcohol can slowly make the body more tolerant to some symptoms. However, this is not recommended due to the many negative side effects of alcohol itself and the increased risk of cancer.

When considering possible ways to alleviate symptoms, it is important to make sure that people do not confuse AFR with other conditions with similar symptoms. Alcohol has also been found to exacerbate or trigger other pre-existing conditions, such as Red Ear Syndrome, Rosacea, and Degreaser’s Flush.

Although “Asian glow,” as the nickname suggests, is found mostly among East Asians, there have been instances in which non-Asians also have this condition. If you consume alcohol regularly and think you may have this reaction, it is best to consult your physician for more information and alcohol consumption guidelines.