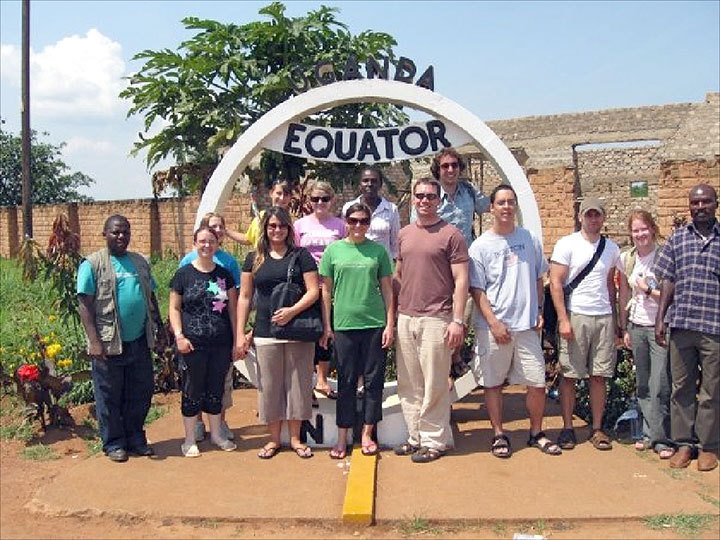 Amizade’s 2009 Tanzania team visits the Ugandan border. This year, students will no longer travel through Uganda due to Amizade’s current boycott — a response to Ugandan anti-homosexual legislation. (credit: Courtesy of Brandon Cohen )

In response to Uganda’s anti-gay policies, Amizade Tanzania semester site coordinators will now meet the students in Kigali, Rwanda before continuing to the group’s base in Karagwe, Tanzania. (credit: Maria Raffaele/Art Editor)

Amizade Global Service-Learning, a Pittsburgh-based nonprofit organization that offers service-based study to students around the nation, has recently taken a stand for international human rights.

Uganda has been the subject of much debate within the international community for its negative stance on homosexuality.

On Oct. 14, 2009, a member of the Ugandan Parliament introduced an “Anti-Homosexuality Bill” that would put into place some of the harshest anti-gay regulations in the world. Amizade has responded to the Ugandan government’s anti-homosexual legislation with a clear and decisive move toward justice for Ugandan nationals and safety for participating students.

Previously, students studying at Amizade’s Tanzania base traveled through Kampala, Uganda at the beginning and end of the program. However, in response to Uganda’s anti-gay policies, Amizade Tanzania semester site coordinators will now meet the students in Kigali, Rwanda. The change in operation will ensure that Amizade does not spend money within Uganda, and therefore will not support an unjust law.

Stephanie Vickery, a Point Park University graduate, volunteers for an NGO named MAVUNO and is currently the program facilitator for Amizade’s Tanzania site.

“Amizade’s move out of Uganda was important not only in its intent to display sympathy and support for criminalized homosexuals, but also a means of educating the population at large,” Vickery explained.

Amizade’s director of operations and African/Caribbean programs Brandon Cohen added that Uganda’s human rights violations were not the only deciding factor in the change: The Amizade administration was also concerned for the safety of participating students.

“We’re not policy experts, but we monitor policy to be sure that our volunteers and students are safe,” Cohen said.
“When this appeared in the news, it seemed to be a good opportunity to stand and say that we’re not going to engage and give funds to a government that supports this anti-human rights measure. At the same time, we saw it as a chance to protect our participants and staff — who may or may not be homosexuals themselves — from any abuse.”

Graham Hubbs, who recently received his Ph.D. from the University of Pittsburgh’s philosophy department, currently acts as the on-site professor for the organization’s Tanzania base. Hubbs accompanies students on service-based trips and also teaches two courses in Tanzania: International Justice and Nationalism as well as Internationalism and Identity.

“Amizade saw the matter as a human rights issue and decided to respond with what, effectively, amounts to an economic boycott,” Hubbs said. “The reasoning was quite simple: Amizade did not want to contribute to the economy of a state that, in its view, was heading in the wrong direction on a fundamental human right.”

The Pittsburgh community has responded positively to Amizade’s change in operation, with many seeing the adjustment as a brave step toward protecting the equality of Ugandan citizens while simultaneously speaking out against an unjust government.

“A lot of people might think that boycotting seems like an extreme reaction. But in a sense, it seems like, more and more, officials aren’t listening to the people, so boycotts and public demonstrations become the only way that the people can get their attention,” said Sara Faradji, a first-year global studies major.

Vickery agrees that communicating the organization’s displeasure to the government is a goal discussed at the inception of the boycott. However, she also believes that the boycott will be seen by the Ugandan nationals as an act of solidarity.

“In pulling out, we are not merely trying to send a message of displeasure to the parliament,” Vickery said. “We are also saying to the Ugandan people: Do not be afraid of your brothers and sisters. Do not be persuaded by hate. Do know that among the most essential prerequisites for development and progress are human rights, and our resources and efforts must move with those persuaded by equality in the here and now.”

Amizade encourages intercultural exploration and understanding through community-driven volunteer and service focused learning programs in 14 communities and 10 countries. Since its creation in 1994, Amizade Global Service-Learning has helped over 4000 volunteers ages 13 to 83 contribute over 140,000 hours of service.