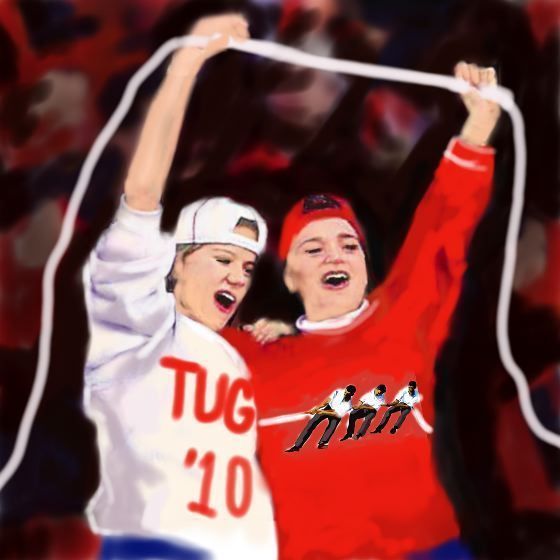 Credit: Rachel Inman/Art Staff
Editorials featured in the Forum section are solely the opinions of their individual authors.

I actively participate in fantasy sports. Maybe it’s to make up for the fact that I don’t vote in local elections, haven’t watched every episode of Jersey Shore, and regretfully let my team down in IM co-rec badminton. (Sorry, Ben.) Fantasy sports are my way of engaging in representative popular culture in a competitive format. Either that, or getting excellent training in becoming a bookie.

I convinced a few fine young first-year gentlemen to register for fantasy figure skating in light of the Olympic year, and in exchange I registered for the official NFL Fantasy Football Playoff Challenge. Early signs of bitter competition quickly appeared: On the eve of 2010, instead of wishing me a happy new year, my friend Jason ominously declared, “This is the year I defeat you in fantasy figure skating.” I’ve never felt so threatened.

Fantasy figure skating works somewhat differently from fantasy football. Skaters in each competition are divided into three broad categories based on international rankings. You pick your presumed best in each category, considering factors such as the specific competition, time of year, technical ability, artistic ability, nerves, and number of sequins on costume. You do this for ladies’, men’s, pairs, and ice dancing. Based on these selections, you are ranked among all other players for each competition. Considering that there are around seven or eight rounds of this before the Olympics, fantasy figure skating is more than your average laughable pastime — it’s one hell of a full-out endurance-based competition.

The process is so complicated that a friend who knew a decent amount about logic, probability, and programming offered to write a program that would weigh in all these options and generate the optimal selections for each competition, thereby helping me to my victory. I was thrilled. However, after hearing that he had to factor in sequins and density of makeup, he abandoned me and my endeavor to do more “serious” things, such as working on his Area of Effect in World of Warcraft.

I asked some of the guys what their strategies for picking obscure figure skaters were. Peter mulled over his online ballot and pulled up a world map in a new tab, proclaiming that he was going to pick skaters from countries that were the closest to the equator. Dave resigned himself to picking skaters with the weirdest names, adding Ari-Pekka Nurmenkari and Rockne Brubaker to the mix. Adam Wikipedia-ed pictures and essentially picked the hottest ones.

Jason, my biggest threat, picked singles actually based on international rankings. He picked pairs and ice dancing based on if he thought they would make a good couple or not.

“You know what they say,” Jason said. “The team that skates together...”

“Okay!” I countered. “Do you want to hear how I picked my NFL team?”

Not being big on statistics, I picked players based on how much they smiled. I started with a snickering Tony Romo and worked my way up to a beaming Larry Fitzgerald, who turned out to be a good choice because he eventually earned me 20 points in Round 1. Shonn Greene and Cedric Benson also made it on, along with their pearly whites. My team of Crest WhiteStrips models was ready to go.

A few weeks later, after the national championships that served as Olympic trials for figure skating and the Round 1 “Wild Card” for football had ended, we met up to compare. My smiling football boys totaled up to 110 points, well above Jason’s 97 and Adam’s 67. I was ecstatic.

For figure skating nationals, however, I had typically over-analyzed and ended up in a dismal 333rd place. Meanwhile, using his piece-by-piece strategy, Jason tied for 25th place.

At this point in my education, I was relieved to finally find out how the world really works. Having no knowledge can undeniably be your best strategy. Knowing this now, I threw in the towel and started randomly pointing at my computer screen for my Olympic picks. It might be my best bet.