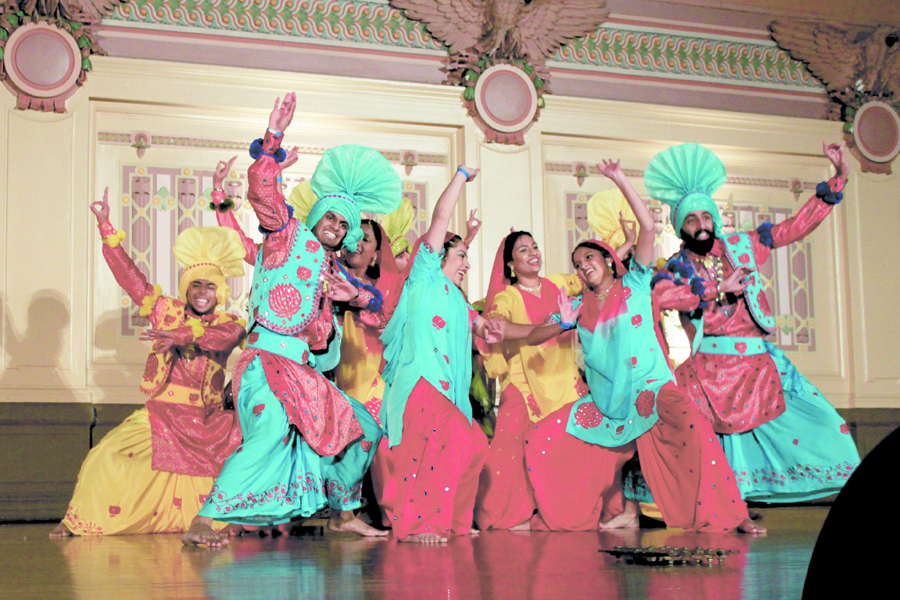 A team performing at Bhangra in the Burgh, hoping to leave with the first-place trophy, strikes a pose. (credit: Alexandre Kaspar | Photo Staff) 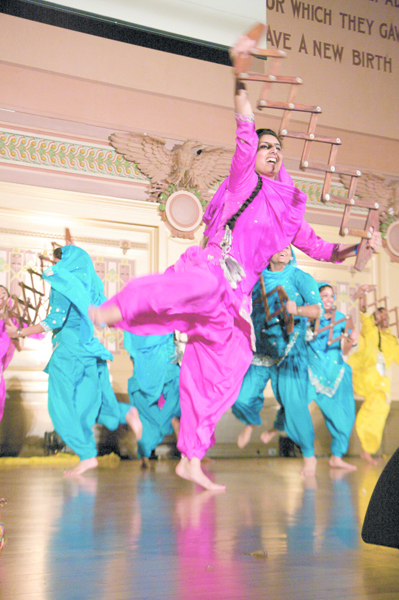 A performer at Bhangra in the Burgh dances on stage at the Soldiers and Sailors Memorial Hall with the hopes of winning the dance competition. (credit: Jonathan Carreon | Photo Staff)

The fourth annual Bhangra in the Burgh competition was one of the most exciting shows since the creation of the competition. Master of ceremonies and social and decision sciences junior Suraj Baxi kept the audience entertained, and Carnegie Mellon’s own bhangra team performed at the end of the show.

As usual, the Soldiers and Sailors Memorial Hall was packed for the show, with tickets having sold out that morning. The Bhangra in the Burgh staff members wanted to make this show an experience, and they certainly pulled it off. There was a VIP section where guests received a small blue gift bag that included a Ferrero Rocher chocolate, a thank-you card, a Bhangra in the Burgh pen, and even a coupon for a free water bottle and samosa during the intermission.

As the crowd filled in the seats before the show began, The Originals, Carnegie Mellon’s oldest all-male a cappella singing group, founded in 1996, performed. Then the MC came out — or to be more accurate, the MC’s evil twin (Baxi with glasses and an Indian accent). Apparently Baxi was taped to his chair back in his dorm room — a video explained — and the audience laughed as the evil twin ran off stage to avoid Baxi’s threats.

Then came the seriously epic opening credits. A video of past performances paired with a loud hip hop/bhangra fusion beat left the audience roaring for the show to begin.

Baxi, freed from captivity, came on stage with a crew in tow, throwing Bhangra in the Burgh T-shirts out to the audience. After a welcome and a few jokes, Drexel University’s team took the stage. Along with the dance members, the team also came equipped with a dhol — a traditional drum used while dancing bhangra. Dressed in red, green, blue, and yellow, Drexel started off the show with a lot of energy.

After two performances, Carnegie Mellon was able to exhibit some of its own talent. The Dancers’ Symposium Company took the stage to give the audience a contemporary dance performance with an intriguing storyline.

Next up was the First Class Bhangra team “Pittsburgh born, Pittsburgh bred” and the self-proclaimed “hometown Bhangra team.” This troupe of all males danced around the stage in black, brown, and orange. It was the first team to incorporate tricks with its props, but the performers also looked exhausted by the end of their routine, holding up letters that spelled out “Pittsburgh” and spinning Terrible Towels above their heads.

The Rutgers University team had a Jersey Shore-inspired team video before its performance and started off strong, parading across the entire stage in white, purple, orange, and blue. There was no dhol player, but the team did have a chimta — another traditional instrument that looks like a long, flat folded piece of metal strip with pairs of small metal jingles. In the middle of the routine, a dancer came on stage dressed very oddly for the competition, wearing a black T-shirt, black Adidas sweats, and a huge blue mask — complete with huge orb eyes that lit up—and huge screen ears. This team even managed to include props with blankets and a table while some of the women played tambourines or danced with little vases. The dancers ended their routine with a waving Rutgers flag.

The University of Pittsburgh was up for an exhibition performance as well, presenting its PantheRaas team. This type of dance style was originally performed by men, using a pair of wooden sticks called dandia. The Pitt team had men and women on stage, although some women were made up to be men, all dressed in orange and blue with silver and red accents. The performance was beautiful and a nice change of pace from the competition.

Up next was the DC Bhangra Crew. This all-female team was a crowd pleaser with its performance and choice of songs. As “Whip My Hair” and other recognizable contemporary singles played under the Bhangra beat, the women brought props as well: Blankets, fans, and jars appeared along with the song “How Low Can You Go.”

After such a riveting performance, the intermission commenced as samosas and water awaited audience members in the hallway.

The show resumed with an exhibition performance from Deewane, Carnegie Mellon’s South Asian all-male a cappella group. After a rendition of “Airplanes,” the group broke out into a crowd favorite: “Mundian To Bach Ke,” the song that Jay-Z rapped over in 2003. With beatboxing and harmonies, Deewane came with its own rap, “This ain’t no Roc-A-Fella, we’re singing a cappella.”

Virginia Commonwealth University performed next, bringing out two MCs with microphones. VCU was the first team to use the strobe lights in the middle of the routine as opposed to just the beginning.

After Carnegie Mellon’s Tanah dance team performed, the winner of the competition was announced.

VCU managed to win over the judges and took home the title of first place, as well as bragging rights until the next Bhangra in the Burgh.