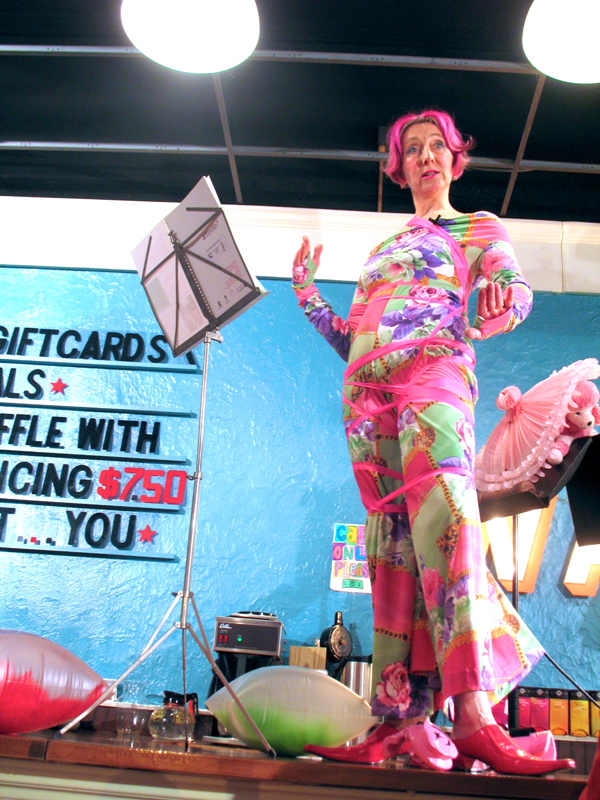 Ziranek performed a series of monologues, skits, and performances before later returning to the Waffle Shop for a stint as guest host for the restaurant’s student-run talk show. (credit: Christina Chen/Photo Staff)

Silvia Ziranek certainly knows how to make an impression when she walks into a room. This past Friday at the Waffle Shop, a restaurant run by the Center for Arts in Society, the British artist arrived with short pink hair, a garland of lights around her head, and a mismatched ensemble of brightly printed clothes, complete with large red shoes. Ziranek is a performance artist, sculptor, photographer, and writer who, according to waffleshop.org, aims “to deflate the pretentious and absurd in daily life.”

Ziranek, whose presence was made possible by the support of the School of Art at Carnegie Mellon and the Center for Arts in Society, made two appearances on Friday at the Waffle Shop, one at 8 p.m. and another at 11 p.m. Her 8 p.m. performance was a series of extended monologues, including her newest piece, “How Now Affects How.” She had also performed these monologues for Carnegie Mellon students earlier in the day during an architecture studio class.

When she returned to the Waffle Shop at 11 p.m., she served as the guest host for the shop’s live streaming talk show. The talk show set was littered with miscellaneous props, mostly pink. Her first talk show guest was a man named John, of whom she promptly asked, “How? Why?” Part of the way through their conversation, she abruptly pulled out a plush, working radio and ordered her guest to turn it on and switch through the various radio stations.

Her second guest was sophomore Tepper School of Business student Alex Price, who volunteered to come on her show. Although their conversation occasionally reached potentially interesting topics, Ziranek never appeared interested in doing anything more than just skimming the surface of any one subject matter. They began an interesting dialogue about feminism, but halfway through Ziranek appeared to lose interest.

As Price began to answer her questions about his views, she gave him a piercing look, then again pulled out her plush radio before giving away her props to audience members; she gave Price a pair of pink boxing gloves. She then began to question him about his opinions on steel. This unwillingness to speak deeply about any one topic may have been a reflection of her aim to “deflate the pretentious” in daily life; however, it came across as flighty and superficial.

Her third guest was second-year architecture major Anna Bieberdorf, with whom Ziranek began conversing about femininity and what it means to be feminine. Again, however, Ziranek appeared unwilling to stick to any one subject for very long, and the conversation turned to the aesthetic appeal of bridges and power lines.

A gentleman whose wife had apparently attended Ziranek’s 8 p.m. performance and insisted that he go see her speak soon joined them on the talk show set. When Ziranek heard that his wife had been at the previous performance, she insisted that he take a prop for her, and presented him with a miniature dust pan and brush, instructing Bieberdorf to first clean off his jacket and shoulders with the brush.

Overall, Ziranek’s role as a guest talk show host at the Waffle Shop was whimsical and quirky at best, superficial and flighty at worst; but perhaps she was acting purposefully to make a point about the absurdities and superficialities one encounters in everyday life.