Drama students take us to the circus 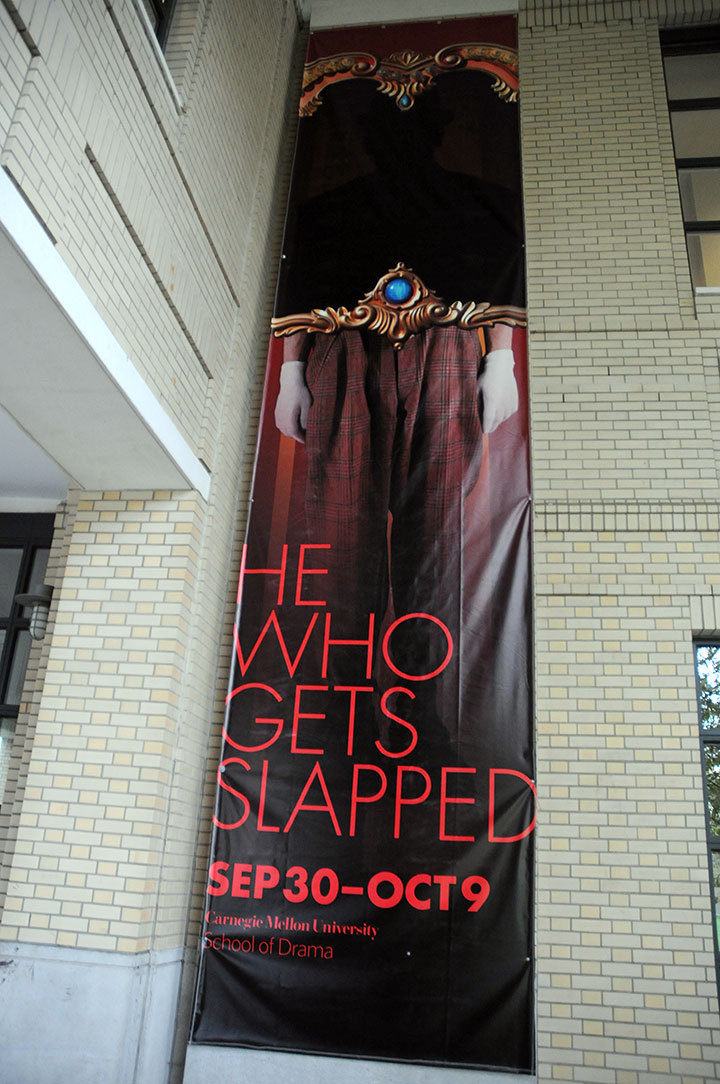 Students will perform *He Who Gets Slapped* in the Philip Chosky Theatre through Oct. 9. (credit: Celia Ludwinski | Photo Editor)

This past weekend, the Carnegie Mellon School of Drama staged its opening production of Leonid Andreyev’s He Who Gets Slapped, a Russian screenplay that was published in English in 1922 and made into a film directed by Victor Sjöström in 1924.

The original play tells the story of Paul Beaumont, a scientist who has been working on his revolutionary theories about the origin of mankind for several years. When Beaumont perfects his theories and deems them worthy of presenting to the cademy of the Sciences, his wife Marie steals his life’s work and hands it over to her lover, the baron. When Beaumont presents to the academy, the baron takes credit for Beaumont’s work and thus humiliates him in front of his peers. When he attempts to seek consolation from his wife, Marie admits to her affair, slaps her husband, and calls him a clown.

Five years later, when the Carnegie Mellon drama production begins, Paul Beaumont is now a circus clown in Paris performing under his alias “HE who gets slapped” and denouncing his prior identity. With an eclectic group of talented performers in the show, HE’s act in the circus becomes incredibly popular. HE falls in love with his co-worker Consuelo, who rejects him for a prospective arrangement with her father’s wealthy friend. When the baron leaves Marie and reappears to declare his love for Consuelo, HE soon discovers that Bezano, a daredevil horseback rider in the circus, is also in love with Consuelo and that she returns his feelings. Several scenes later, through a series of dramatic events, HE is forced to meet a tragic fate.

The show, put on by acting and musical theater majors at Carnegie Mellon, is a circus act in itself. Unicycles, stilts, twirling pillows, strong men, and acrobatics make for an exceedingly enjoyable show. The acting is also spot-on, and the outrageous costumes make the cast even more believable. Senior Arya Shahi, who plays HE, is definitely independent on the stage, taking his hopeful character to a higher level. One could hear the playwright’s own words of love and longing through senior Catherine Urbanek, who plays Zinida, the lion tamer. Of course, the show would not have been anything without Consuelo, played by senior Kailie Torres, who gives a brilliant and elegant performance alongside her intimidating cohort, senior Curtis Gillen, as Bezano. Though sometimes the sequence of events moves a bit quickly, the pace doesn’t take much away from their stellar performances.

The set, which matches and fulfills the imagery of the story, is also rather versatile — being used as a backstage, a curtain behind which people would change clothes on stage, or a death bed. One of the characters, in thrones of fate, falls onto part of the set, virtually “destroying” it and ending the show with a dark mood. The production definitely took some interpretive liberties, so if you’re depending on Wikipedia for a plot synopsis, well, “you’re a donkey.”

Directed by Tony McKay, the associate professor of drama, the Carnegie Mellon production of He Who Gets Slapped is a thrilling story of vanity, love, and moral corruption. As this is only the first production of the 2010–2011 drama school season, students can look forward to several incredible productions, including Vanishing Point, The 25th Annual Putnam Spelling Bee, and A Midsummer Night’s Dream.