Sculpting a new take on art 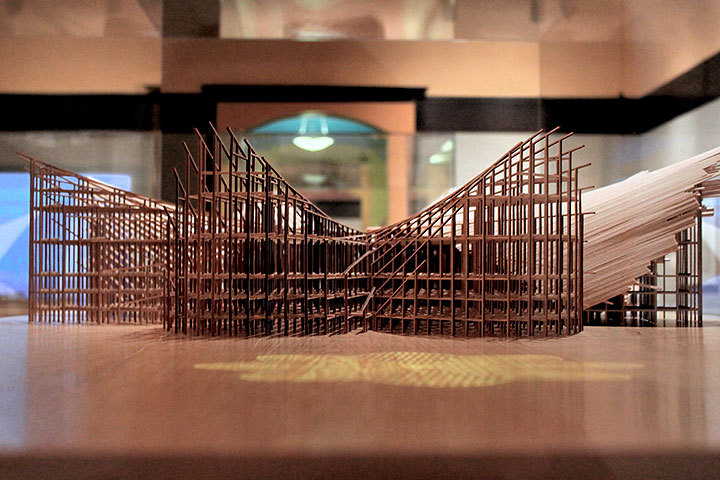 The Art of Structure exhibit at the Carnegie Museum of Art is located in an enclosed hall of the Heinz Architectural Center. Heavy glass doors with “The Art of Structure” scrawled across them face visitors as they enter a hallway of yellow walls and high ceiling arches. After walking through the entire space, visitors may realize that the curves of the interior structure match the concepts behind the two projects on display.

The show is meant to demonstrate the innate connection between architects and engineers. Such collaborations have created stunning engineering feats, such as the Brooklyn Bridge and the Eiffel Tower, which are also sources of artistic inspiration.

According to the Art of Structure press release, professor David Billington of Princeton University stated that, in the 19th and 20th centuries, “structural forms came exclusively from the engineering imagination,” and that “aesthetic sensitivity was central” to the thinking of engineers. Such structures not only stand up or connect point A to point B, but they do so with such economy, elegance, and sensibility as to construct an original art form.

Each engineer’s work is displayed through models of structures under glass cases and through pictures on the walls. There is also a stereoscopic display of one project from each engineer’s body of work. This type of display involves a large print of a structure, with another copy, flipped laterally, next to it. A mirror is positioned in between the original image and its reverse so that an observer can look straight ahead at the original image with one eye and at the reflection of the reverse with the other eye. The result is a three-dimensional view of the structure. This kind of display is an excellent addition to the exhibit because the work of the engineers is meant to be viewed and enjoyed three-dimensionally.

Félix Candela is the architect of the exhibit. He trained in Spain and is most famous for his work with curved surfaces — specifically hyperbolic paraboloids, which are generated from sets of straight lines. This means that unorthodox shapes can be created through the use of simple boards as formwork. There are pictures and little models of his “umbrella” structure, which he used to create the Chiclayo Market in Peru.

“It’s a source of inspiration,” said Jae Han Bae, a second-year architecture student. “I am here for an assignment as well,” he said, but mostly the work he saw was “interesting.”

The work displayed serves as testimony to the ingenuity, as well as the beauty, in the structures created, forever utilized and admired by all.