Jen Larsen shoots for the stars 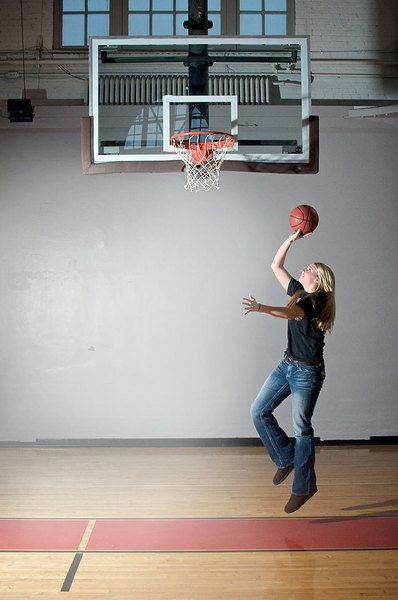 Returning to competition after an injury last semester, sophomore Jen Larsen has made determined efforts to help out the Tartans’ women’s basketball team in some close matches.

Returning to competition after an injury last semester, sophomore Jen Larsen has made determined efforts to help out the Tartans’ women’s basketball team in some close matches. In the first University Athletic Association (UAA) conference game at Emory in Atlanta, Larsen posted a career-high 26 points and nine rebounds, and she as been contributing respectable numbers in more recent games as well.

Larsen’s hometown of Exeter, N.H. has a much different atmosphere as a small town than the city life of Pittsburgh, but Larsen appreciates the manageable size of the city and the somewhat secluded feel of campus relative to its distance from downtown. Although she misses the beach and plentiful snow of New England, she has embraced the change in going to school away from home. Larsen and her friends have found the Tartans Pavilion to be an ideal hangout and study space, and a convenient place to eat during her busy schedule of practices and classes during basketball season.

As a student studying psychology, Larsen hopes to someday open her own practice as a clinical psychologist in a region of the country where she can be closest to her family and friends. Carnegie Mellon’s prestigious academic reputation was a deciding factor for Larsen’s choice of schools, and the chance to play college basketball sweetened the deal. In the future, Larsen hopes to perpetuate the presence of sports in her life by joining an adult league after college while she pursues a career. Until then, Larsen can look forward to keep contributing admirably to the women’s basketball program and take advantage of the academics that Carnegie Mellon has to offer.