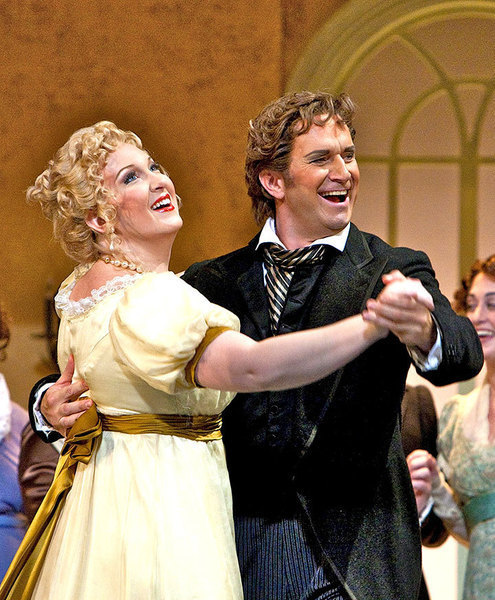 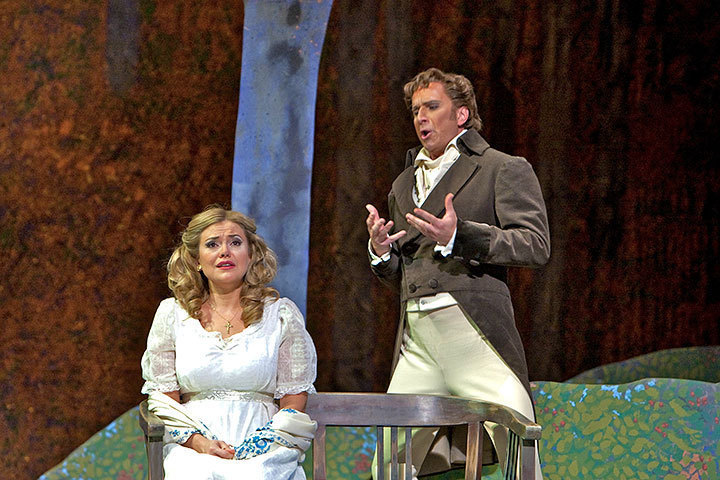 Onegin explains to an embarassed Tatiana that he cannot reciprocate her love. (credit: Courtesy of David Bachman)

From the first note played by the orchestra to the last emotional chords sung by Onegin and Tatiana, the Pittsburgh Opera’s presentation of Tchaikovsky’s Eugene Onegin last Saturday was a huge success.

Tchaikovsky’s opera, first performed in 1879, is based on Alexander Pushkin’s novel, written in verse, of the same name. Much of the verse sung in the opera is taken directly from the novel, and the entire opera is sung in Russian.

Tatiana (Anna Samuil) and Olga (Lindsay Ammann) are sisters, and are two of the main characters. Olga is in love with their neighbor, Lensky (Raymond Very), who brings a friend and neighbor, Eugene Onegin (Dwayne Croft), to their house to visit.

Tatiana immediately falls in love with Onegin, only to be rejected by him after sending him a letter. Despite the fact that Onegin and Lensky are friends, they quarrel in the second act and ultimately fight a duel. In the third act, Onegin realizes that he is in love with Tatiana, only to find that she has married his older cousin and is no longer available for him.

All of the cast members were wonderful performers with powerful voices. In each scene, the characters’ emotions showed both through the tone and volume of singing and through physical actions, and each note sung contained meaning and emotion.
When Tatiana is thinking about writing to Onegin, her excitement, anxiety, and worry show through her actions. She often looks at herself in a mirror, and when she sings that she is ashamed, her voice transmits her emotion, and one cannot help but sympathize with her.

This scene was also particularly interesting because it took place in Tatiana’s bedroom. The way that this was portrayed was to have a room seemingly floating above the stage. The space around it was unused, and it was clear that her bedroom was on the second floor of the house, which looked almost like a dollhouse.

Doors led to balconies and out of the room, and when Tatiana observed that it was morning and she had not slept, sunshine (or what looked very much like it inside of the theater, anyway) crept in through her window and her outside door.

After Tatiana’s old nursemaid, Filipyevna (Susan Shafer), agrees to have someone deliver the letter, the scene changes, and the room disappears to give way to woods and peasant women picking berries. The women sing of how they will pelt men with berries and then leave the stage for Tatiana.

Tatiana is frantic, and the worry and regret over sending the letter show in her singing, her breathing, and her frantic movements around the stage. When Onegin comes into the forest, he pulls the letter out of his coat pocket and not-so-sensitively informs her that it’s no use pretending she didn’t write it.

After Tatiana sits on a bench — her face distraught, her breathing heavier and shakier — Onegin tells her to be more careful next time; other men might be less kind to her about it than he was. Tatiana is crushed, and the act ends with her sitting alone on the stage.

The next act focuses on Onegin and Lensky, but perhaps the most entertaining character is Monsieur Triquet (Joseph Frank). Triquet is French and is visiting a friend in Russia. He sings a song to Tatiana with lyrics so amusing to the crowd that Olga audibly laughs in the middle of a verse. The party guests applaud him when he stops, but once they stop, he starts again.

It is at this same party that Lensky and Onegin agree to duel, resulting from jealousy and conflict over Olga.

The duel is regarded as one of the most important points of both the opera and the novel. It is a powerful scene in which two friends must fight because of a rash decision made at a party. It results in the death of Lensky, who feels that he has lost everything anyway, having told Olga the night before, “farewell... forever.”

The end of the opera takes place in a palace in St. Petersburg, and Tatiana is shown as a changed woman. Now married to Prince Gremin (Oren Gradus), she is no longer the country girl she used to be. In earlier scenes, her hair was worn down and her dresses were usually white and simple.

Here, her hair is elaborately styled and she wears a bright red gown with elbow-length gloves and glittering jewels. It is clear that she has changed to become something completely different from before. Onegin attends the ball and sees her, deciding that he is in love with her.

Perhaps the most entertaining part of this scene is when Onegin realizes that he loves Tatiana. His enthusiasm is comical, and his facial expression is like that of a child.

His grin takes over his face, and he looks toward the ceiling, hands clasped under his chin. This, coming from a character that is very stoic through the rest of the opera, was surprising and showed a marked change in Onegin.

The final scene takes place in a private room in the palace with Tatiana and Onegin. He begs her to leave her husband for him, and she refuses, even after admitting that she still loves him. She bids him farewell forever and leaves the stage. Onegin, crushed and kneeling on the floor hunched over, is the last image shown in the opera.

While the singing, set, and costumes were all very important to bringing out the emotion and meaning in the show, it would be wrong to leave out the influence and importance of the orchestra.

Conducted by Antony Walker, the music provided the perfect backdrop for all of the events. The intensity or calmness of the music drove the emotional feeling even in large scenes, and Walker’s animated movements contributed to the feelings evoked by the opera as a whole.

This tragic story of friends and lovers who must be parted was a huge success on the stage, with shouts of “bravo” coming from the audience at the end of nearly every song. All of the emotions transmitted through the singing of the very talented cast contributed to a highly successful rendition of Tchaikovsky’s Eugene Onegin.