Political activism and free expression take over the Fence 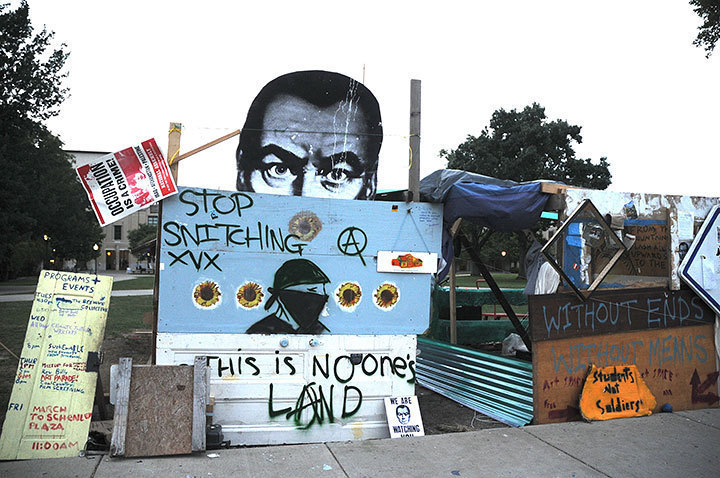 Structures built from scratch, spray-painted messages, and Big Brother’s eyes populate the CMU G20 Arts Base. Many students questioned the purpose and aesthetics of the project. (credit: Allison Piper) 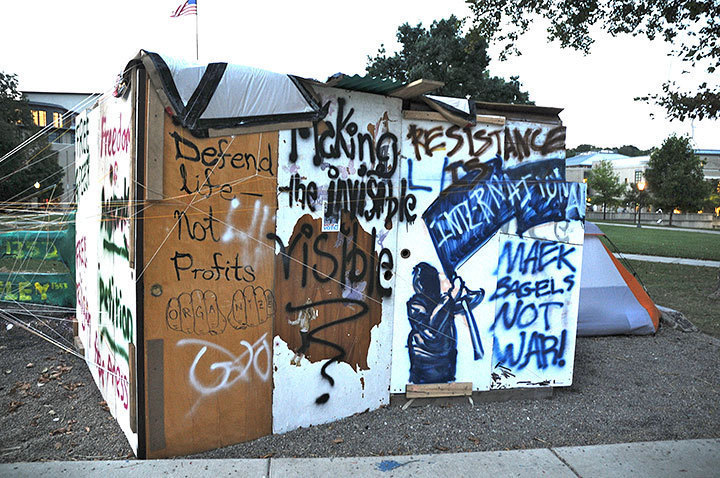 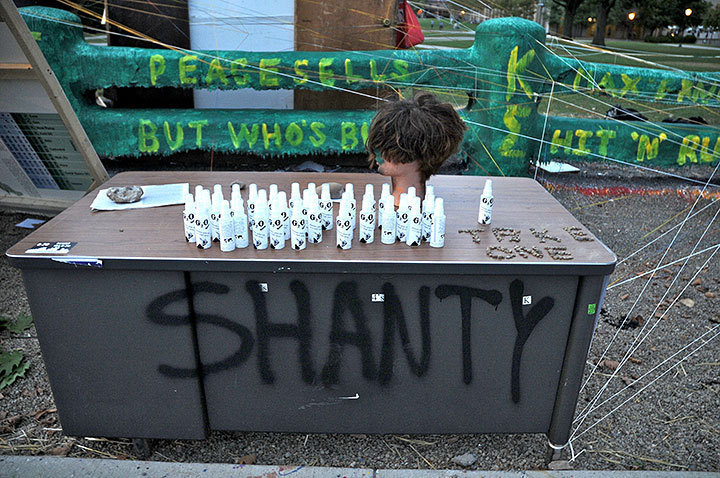 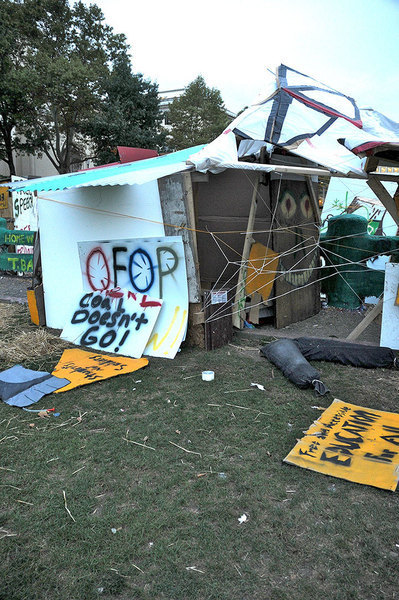 his past week, in light of the G20, students from Carnegie Mellon transformed the Fence into a patchwork quilt of political messages. However, many of the messages themselves were left unclear, and the site of what appeared to be a spray-painted junkyard imprisoning the Fence generated a feeling of opposition and disdain for the project. Those involved were left with a whole mess of misconception to sort out.

Truth be told, there seemed to be a lot of rumors going around about the intentions of those involved in Project Shantytown. “I kind of like the legend of it all,” said Austin Redwood, also a senior in the BHA program. “That is why I haven’t been very vigilant about turning out rumors.”

The G20, established in 1999, is a group of 20 international finance ministers and bank governors who come together once a year to discuss the global economy, and opposition against the conference is usually due to the exclusivity of it all.

This year, with the conference held right here in Pittsburgh, opposition forces have been plentiful, especially here at Carnegie Mellon. However, those opposed to the student activity at the Fence were not necessarily in favor of the G20. A majority of the opposition facing Project Shantytown was mainly because of its aesthetics.

“I don’t particularly see what their stance on the G20 is,” said Ila Foley, a sophomore English major, “so I don’t think it’s a particularly effective protest. I don’t understand what they’re trying to get across; it’s just a shantytown. I only saw one piece of art that actually said ‘G20 GTFO,’ so other than that, it really just looks like a bunch of frat boys camped out at the Fence.”

Because of the peculiar way in which those at the Fence went about protesting the G20, most onlookers assumed the worst. “Apparently people thought we weren’t even students,” said Redwood. “They would yell at us, ‘If you don’t go here, you can’t have the Fence,’ and then we would poke our heads out and they would be like, ‘Oh, I’m in a class with you.’ ”

The best way to solve a confusing problem is to head straight to the source. In the heart of the Carnegie Mellon shantytown, over a soundtrack of hammering and laughter, Redwood was ready and willing to set the record straight. “This is the CMU G20 Arts Base,” said Redwood. “It is a space in which people can build things and express themselves in relation to the G20. We see that people don’t get a voice when summits like this come to town and we wanted to utilize a space in which they could make banners, have discussions, hold workshops, screen films, and give their side of the argument. The world leaders aren’t necessarily going to hear what we have to say, but we can at least hear it ourselves.”

It turns out there was a lot more to this shantytown than expected. All throughout G20 week, students and professors alike gathered at the CMU G20 Arts Base to host parades, screen films, listen to lectures, and even participate in religious sermons. But as visitors soon found out, there was a reason for the Arts Base’s less-than-appealing exterior.

“We basically built a shantytown because we wanted to at least reference a little of the political impoverishment that comes with not being able to attend certain meetings that decide the fate of a lot of people,” said Redwood. “Here we’re trying to build a structure that can evolve, that anybody can add on to. All of the art you see in here is somehow related to people’s ability to create something for themselves. We’ve created a shelter for ourselves, very literally, but also a political shelter where we can foster ideas safely.”

Those involved with the CMU G20 Arts Base know that not everybody has understood their metaphor. “The idea of a shanty is so foreign for this atmosphere; just the juxtaposition of that image, I feel, has been really powerful for those who realize it is a shanty and associate it to shelter,” said Carolina Ramos, a senior in the Bachelor of Humanities and Arts program. “A lot of people can’t even make that foreign association because we’re so privileged. I think that end of it has been an interesting message about poverty and about how sheltered we truly happen to be.”

The CMU G20 Arts Base has also been a center for those students managing independent G20 art projects to convene. All over campus you can find their work, from stickers to sidewalk chalk to yarn sculpture. Projects have been as simple as wheat-pasted flyers stating “<3 G20” or as complicated as a gigantic “HELP WANTED” poster that covered the entire intramural field. Whatever the project, it’s clear that Carnegie Mellon students want to have their opinions heard.

With few limitations, no part of the campus has been left untouched. In windows and archways all over Carnegie Mellon, students have seen the eyes of Big Brother, a character from George Orwell’s novel 1984, staring back at them. “The half faces are the workings of Nina Sarnelle,” said Redwood. “They are referencing the hopeless non-transparency of the G20 and how we are left only to watch these world leaders. We see what they do and decide when they discuss all of these important topics that affect our lives behind closed doors and we wanted to narrate the Orwellian fiction a little bit.”

Aside from the shantytown’s appearance, there is a plethora of other ways in which the G20 Arts Base has been misunderstood, and members involved were eager to explain. “We had a really unorthodox way of building in this space; we just took the Fence and started building our shantytown,” said Redwood. “People have been saying we took it from the [Pi Kappa Alpha] pledges, when actually, we lent it to them; so maybe we can set that straight. We had the Fence and the pledges were really nervous because they didn’t want to be out here in November, so we lent part of the Fence to them. They were fine neighbors.”

Many reported hearing that those camped at the Fence were serving punishment for their actions. “That’s a really funny story; I’ve heard we got up to $1,000 in fire hazard fines,” said Ramos. “The officers just came to tell us that we couldn’t use tarps, so we stopped using tarps, simple as that.”

The artists and protesters at the G20 Arts Base have tried to remain optimistic. Through all of the negative publicity and rumors, they have kept their shanty house doors wide open. Redwood put it best when he said, “we like building and talking and teaching and learning, even with those who disapprove of what we’re doing. Tell people to come by.” In this glance into the inside of the G20 Arts Base, one thing became increasingly clear: You can’t judge a movement by its appearance, even if it really looks down in the dumps.