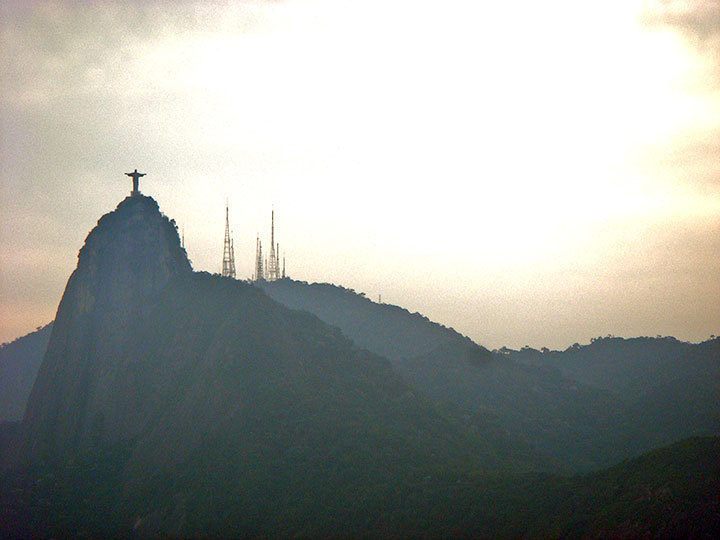 As you drive into Rio de Janeiro, the first visible sight is the image of the famous Cristo Rendedor, a 100-foot high statue of Jesus Christ. (credit: Courtesy of Sasha Urquidi)

“Bem Vindo a Sao Paulo” read the nine-foot sign at the baggage claim. Twelve hours, two planes, a 30-minute train ride, and a three-hour long drive later, I had finally reached my destination: the immense city of Sao Paulo, Brazil.

I rushed out of baggage claim only to find that the study abroad program coordinators had left the airport, as I had arrived after the scheduled pick up time. Immediately, Thiago, my new Brazilian friend from the plane, offered to take me to my final destination.

There I was, on my way to the hotel with Thiago’s mother, father, sister, and niece. They greeted me as if they had known me their whole lives, took me to lunch, and dropped me off at my hotel, and Thiago’s mother went in with me to ensure that nothing was out of order with my reservation.

They gave me all their contact information and insisted that I call them if I needed anything. That was my first glimpse of the welcoming, cheerful nature of Brazilian culture.

Generally, a person’s physical appearance can provide some insight into what their ethnic background may be. For Brazilians, this does not apply. Brazil is a melting pot of cultures, ethnicities, and languages.

Brazilians are Brazilians, whether they are from Rio Grande do Sul with Germanic and Polish roots, from Salvador da Bahia with a distinct African heritage, or from an Indian tribal village in the central-west region of the country.

Brazil also houses the largest Japanese population in the world — after Japan, of course. Each region has its own culture; music and colloquial language are very much influenced by their ethnic roots and many times differ drastically from one another. Brazilian music captures the nature of this diversity very clearly.

The smooth, jazz-like sounds of bossa nova, the pop-like songs of Música Popular Brasileira (MBP), the very inappropriate lyrics of baile funky, the country-like songs of sertanejo, and, my personal favorite, the samba with its lively African beats, all contribute to the mosaic diversity that characterizes Brazilian music.

With regard to my educational experience, I would not change a thing — besides my morning class at 7 a.m., that is. I study at a university called Fundacao Getulio Vargas (FGV), and our classes are quite rigorous with the standard of education on par with that of Carnegie Mellon. Much of the work is group based — which can be a setback considering the very relaxed attitudes of many Brazilian students.

Brazilians are great hosts; hence, a group meeting for a project easily turns into a few beers, great food, and a good selection of Brazilian music. Besides school, I also work as a research analyst for the Center of Finance and Private Equity at my university, which is an experience I value very much considering FGV is a highly regarded business school in Latin America. I enjoy my academic curriculum here and absolutely love my job; I feel like I am learning so much so quickly.

I have enjoyed Sao Paulo very much. It’s an immense city with so much to do — including an incredible night life — and I have made an amazing group of friends with whom I share it all. However, my heart belongs to the city of Rio de Janeiro. In all my life, I have never experienced something as incredible as the first weekend I spent in Rio. I’m almost hesitant to put my experience in writing because I don’t think my writing will do the city justice.

We arrived at Rio on a Thursday night, and as we were driving into the city, the first visible sight was the image of the famous Cristo Rendedor, a 100-foot high statue of Jesus Christ (pictured below). The Christ stands almost mystically on the very tip of the mountain, and clouds surround its base, giving the appearance of its being suspended in the air.

The first thing that came to mind was disbelief that I was actually here. The lively, fiesta-like, very laid back culture of cariocas is uplifting — it makes me smile. The world-famous beaches of Ipanema and Copacabana are a sight to see.

The views from different parts of the city are incredible. There’s samba in the streets of Lapa, where much of the nightlife happens, every night until 6 in the morning.

My friends and I walked into a bar where a group of musicians were playing at a single table with hundreds of people surrounding them, dancing to their hearts’ content. We danced along with them, with absolutely no idea how to properly execute their signature dance moves, but I think we did a fairly good job — if I do say so myself.

With my broken Portuguese and mediocre samba skills, I am immersing myself fully in the Brazilian culture and loving every minute of it. I would say to any student considering studying abroad that it’s important you do. It is part of your education, because what you learn about the world, the nature of people, and most importantly yourself is invaluable.