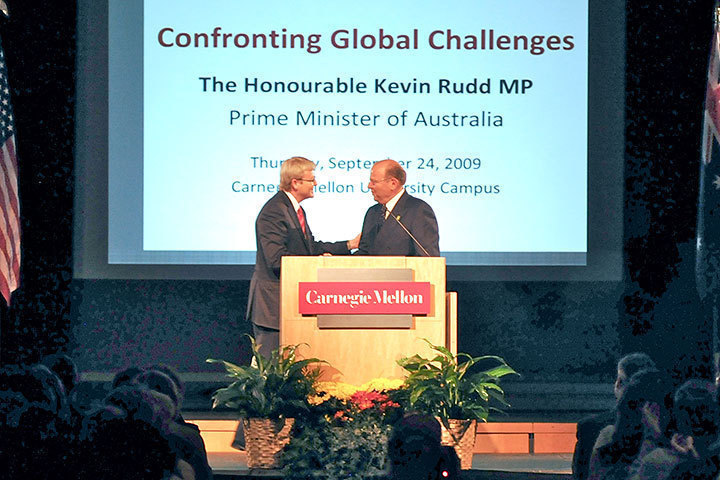 As part of the G20 events on Carnegie Mellon’s campus, Kevin Rudd, prime minister of the Commonwealth of Australia, delivered a keynote address to the campus community last Thursday. The prime minister was among the 20 heads of state present in the city to discuss issues pertinent to global economic recovery.

After introducing the prime minister, Matthew Craig, a master’s student from Heinz College Australia, and Patrick Bourke, a doctoral student in electrical and computer engineering, reflected on how their Carnegie Mellon education coincides with Australia’s vision of global cooperation on all levels.

“Australia has a long history of pragmatic and socially responsible public policy, and the Heinz College is an excellent fit there,” said Craig, a resident of Adelaide.

The Heinz College Australia, an extension of the Heinz College in Pittsburgh, began operations in 2006 and has produced over 130 graduates. Carnegie Mellon is the first foreign university to have been granted permission to offer its own degree program in Australia.

“This university has grown to become one of the great American universities,” said Rudd. “It is a global research university that is making a great contribution to higher education in Australia,” he said.

The prime minister also recognized Andrew Carnegie’s instrumental role in the progress of the steel industry in the past and the present leadership of Carnegie Mellon in technology and innovation.

“But Carnegie’s university, rather than a steel company, is what provided a transformational vehicle for the old city of heavy industry to become the new city of the future, one grounded in the globalizing knowledge economy of the 21st century,” Rudd said.
“The prime minister has been among the most outspoken and most forceful heads of government in the world when it comes to global warming,” said Carnegie Mellon President Jared L. Cohon. “Unlike heads of most governments in the world, he has made actual commitments, something we all should be very grateful for. His leadership has had a big impact,” he said.

Rudd displayed his knowledge of Pittsburgh’s history and culture, blending humor with relevant facts about the G20 host city and its historic feat at economic recovery since the collapse of the steel industry.

“This is my first time to Pittsburgh, and my first time to this university. So as a very proud self-proclaimed nerd, I sat down last night to Google a little about what I was to come to discover here in Pittsburgh,” said Rudd. “And knowing that I’ll be speaking to a room full of nerds, I thought you’d appreciate that,” he added, drawing laughter from the audience.

The prime minister said that while the agenda of the G20 is broad, it essentially deals with “two sets of fundamental threats to our common future: the global financial crisis and the looming crisis of climate change.” He also said that these two themes make Pittsburgh an ideal location for this Summit.

The prime minister went on to focus on strong climate change policies as a catalyst in triggering lasting economic progress. He stressed the importance of carbon capture and sequestration — an area he said was of crucial concern to the G20.

He explained that by 2020, between 75 and 250 million people could be exposed to climate change-induced water shortages. Also, rain-fed agricultural yields could drop by 50 percent in some African countries. Further, rising sea levels could affect more than 1 million people in such countries as Bangladesh, Vietnam, and Egypt. If due action is avoided, global temperatures could rise more than 10 degrees Fahrenheit within this century alone.

“These changes will affect everyone, irrespective of nation or people — this is a global challenge requiring a global response,” said Rudd.

“I think that [Rudd’s] explanations of the numbers related to the carbon emission reduction, and sequestration projects over the country really show how important he thinks the problem is,” said Urmila Rosario, a junior in business administration.

“I really think that this makes him unique in comparison to the other leaders of developed countries, but then again, I think that all world leaders talk too much and actually do nothing,” she said.

Rudd also talked about the significant role that educated youth plays in bringing about a positive change in both the economic and environmental architecture of the post-crisis world.

“Our core challenge will be to convert adversity into opportunity, threat into possibility, and deploy the technologies that lie within our reach and the finance necessary to deploy them to deal with climate change, and as a result, create new skills, jobs, and industries for American and global economies for the 21st century,” the prime minister said.

A panel discussion on the prime minister’s talk and the G20 agenda followed the keynote address. Meanwhile, the prime minister spoke to the local and school media in a separate press conference. During the press conference, he elaborated further on how the G20 will aim to transform the global economy to a lower carbon world through carbon markets, private and public global finance, and applicable technology platforms.