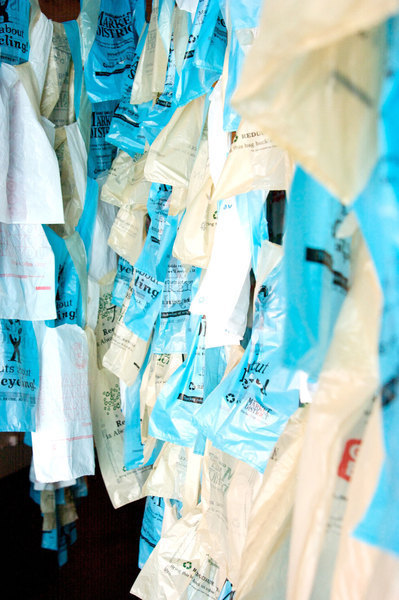 The installation was constructed entirely from LDPE bags donated by Giant Eagle and the residents of Shadyside. (credit: Glenn Stroz | Photo Staff)

Plastic grocery bags have gotten a bad rap in today’s green-conscious society. But what if your average Giant Eagle grocery carrier could be a building block in the creation of a space? Is it possible for waste to be transformed into an enjoyable environment? These questions are answered in the Low-Density Polyethylene (LDPE) installation, aptly titled LDPE Loop, created by four Carnegie Mellon fourth-year architecture students: Filip Agren, Max Arocena, Conor Doyle, and Liz Duray.

“We are in a wasteful moment in society,” said Arocena about the inspiration for the project. “There is no respect for what’s old and what’s already there. There are [artists] doing installations and going to Home Depot to buy their materials; we are turning people’s trash into something that’s beautiful.”

The installation, currently being displayed in downtown Pittsburgh at the Future Tenant Art Gallery, certainly achieves this element of beauty. The ethereal curtains of woven plastic bags transform the gallery space into a passageway that moves and sways with the visitor. A juxtaposition of smaller passageways opening up into a larger, communal space guides a person from the entrance to what the artists have dictated as “nodes of importance”: a bench for resting or the bar for socializing.

“My initial impression was ‘Where do I go?’” said senior mathematical sciences major and musician Dan Lacker. “I started exploring and realized that the installation was guiding me.” The opening of the exhibit that took place last Friday featured live music by Lacker and pianist Patrick McGettigan, a Carnegie Mellon alumnus. Around a hundred students, faculty, and alumni of Carnegie Mellon were brought together by the art.

The installation is the second in a series of projects exploring space and its relationship to audience created from material otherwise deemed waste. Last year, the project titled Canopy, created by Agren, Arocena, Duray, and two other fourth-year architecture majors — Ellen Garret and Judy Podraza — used aluminum cans to form 15 hexagonal structures that were fit together, creating an organic shape, then suspended from the ceiling. The current LDPE installation is also a free-form structure that makes use of a pattern, the weaving of the plastic bags, while still maintaining a natural, non-calculated form. The artists have been working on the concept and execution of the project throughout the summer, culminating in the past two weeks with late nights at Future Tenant weaving the bags together.

To plan the installation, the artists relied on their own drawings rather than computer-created imagery. The space of the gallery was also taken into account; lines of tension wire were mounted parallel to the ceiling tiles, and the bags were then attached to these wires to make full use of the room. The natural light from the entrance was also taken into consideration in the design, with the translucent material of the bags creating a warm and welcoming atmosphere in the areas of interest chosen by the four artists.

Apart from the aid received in the form of a grant from Carnegie Mellon, all of the materials were donated by Giant Eagle and the people of Shadyside. “We went door to door asking people to give us their extra bags,” said Arocena, who estimates that about 5000 were used in the project. “[The installation] also shows the buying habits of people in Shadyside.” While the majority are white and blue bags with the emblem of Giant Eagle, a few Target and CVS logos pepper the sheets of plastic.

“I’d love to see this on a larger scale,” said senior design major Natalia Olbinski. For now, the LDPE bags of the installation, like the cans from Canopy, will return from whence they came: back to waste, recycled and reused by Pittsburgh Giant Eagle customers.