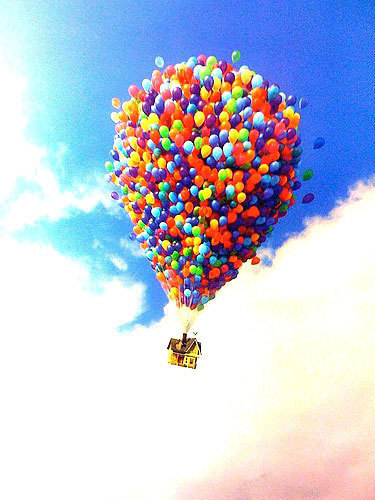 This summer Pixar released Up, its 10th feature film. This film follows the story of Carl Fredricksen, a grouchy old man, and Russell, a persistent little boy, who travel to South America in a floating house.

The movie begins by showing Carl when he meets his future wife, Ellie, and how they bond over their love for adventure and their shared idol, the explorer Charles Muntz. Though their personalities are quite different with Carl being introverted and Ellie being very outgoing, they have a happy life growing old together. Throughout their marriage, the two share a dream of traveling to Paradise Falls in South America to explore like Muntz; however, they never quite make it to Paradise Falls due to Ellie’s illness that takes her away from the world.

The now bitter and lonely Carl is left alone in his house that is standing in the middle of a big city and surrounded by construction. Unable to keep his house, Carl decides to blow up 10,000 helium balloons to fly his house like an airship to Paradise Falls. As his house starts leaving the ground, Carl finds Russell, a Wilderness Explorer who is only missing the “assisting the elderly” badge.

Russell was accidentally taken up into the sky because he had been under Carl’s front porch trying to help Carl catch a wild beast in order to fulfill the requirements of this badge. From there on, Russell and Carl travel to South America, only to realize that they were one canyon away from Paradise Falls.

Upon arrival, Russell and Carl begin their own adventure filled with danger and a new set of unusual friends. Russell immediately bonds with an exotic bird that follows the two travelers, naming it Kevin. Carl, meanwhile, is overwhelmed to find out that his childhood idol, Muntz, is in South America. But Muntz is not what he had expected. Muntz has become a man obsessed with capturing the very same exotic bird that Russell has become attached to, and is willing to destroy anything and anyone who gets in the way of what he wants.

Unfortunately, this means that when Carl and Russell decide to save Kevin and return the bird to her babies — Russell hadn’t known it was a female bird when he named it — they are up against Muntz. On their trip, they team up with a talking dog named Dug, who should have been following Muntz’s orders and killed the duo, but decides to follow his heart instead. This crazy journey allows Carl and Russell to form a strange but loving family-like bond that Carl thought he had lost with Ellie.

This wonderful movie is a must see for all Pixar fans and anyone who is looking for an inspirational, heartwarming story and a good laugh.