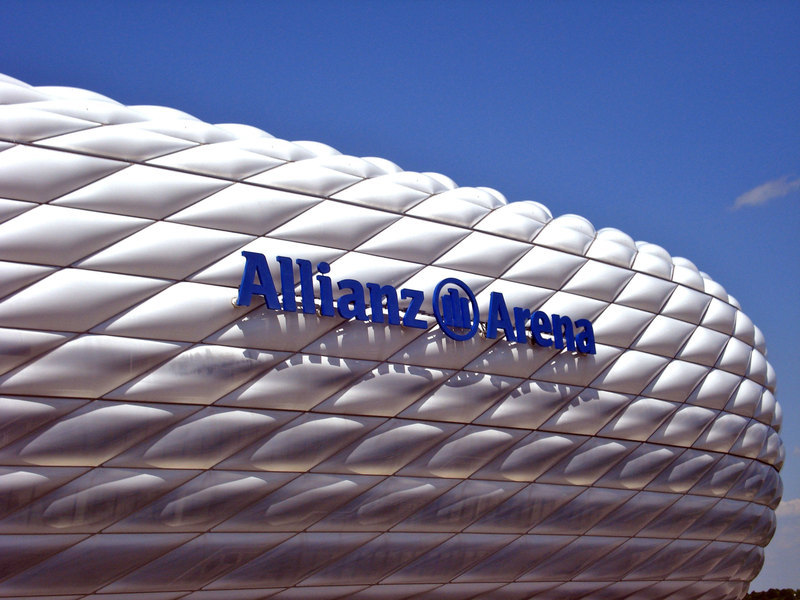 Pictured is the Allianz Arena in Munich. (credit: Courtesy of Manasi Patil)

I was spending my summer in Germany, and since it was a perfect sunny day, I had decided to go the beach, have some cold refreshments, and just relax. But, suddenly, the sun was too bright and I found myself looking for sunglasses... in my dorm room at 5:30 a.m. While in Germany, the summer sun would unfailingly wake me up way before my alarm went off. And punctuality is a characteristic of not just the German sun.

In order to reach my 8:30 a.m. class on time, I would ride an overflowing 7:15 a.m. S-Bahn to Marienplatz, the town center of Munich. The school children on the train would be happy and chatty, even at that hour, comparing notes and homework, while all the adults going to work would be wearing perfectly pressed suits and reading either the newspaper or a book.

Even as I walked through Sendlinger Tor at this early hour, I found myself in the company of shopkeepers and pharmacists. Most of the shops and drug stores would be open by half past seven. Admiring the German work ethic, I would walk straight into a baeckerei for some hot tea and freshly baked bread.

Baking is not just a major profession in Germany, it is also a significant part of their culture. I realized this when the only assigned project in my class was on bread. At first, my friends and I were ready to dismiss the project as silly, but soon we were to realize its purpose and importance. My classmates and I decided to meet at a bakery across the street right after class. I am sure the locals found it amusing to see a bunch of foreigners literally studying the different varieties of bread, with pen and paper in hand. After about half an hour of inspection, we left the bakery dissatisfied with only 30 kinds of bread. We clearly needed more options. So, we spent the rest of the afternoon visiting many more bakeries, trying and testing the delicious breads.

In the land of brezel, or pretzel as we know it, there are over 300 different varieties of bread to choose from. If you want to try some, you’d better go to a bakery in the first half of the day, because post lunch, most of it is usually sold out.

Variety is offered to you not only in bread, but almost everything else as well. In magnificent Munich, you will find something to do, no matter what your interests are: food, history, sports, music, engineering, or art.

On my first Saturday in Germany, I visited Dachau. Dachau, located very close to Munich, used to be one of the concentration camps between 1933 and 1945. It was one of the bigger camps and the only one that never went kaput — until they all did, that is. As a result, a little over 2 million prisoners were here at some point. As if the statistics weren’t enough, the gray clouds and the persistent rain continued to dampen my spirits, but somehow, that felt right.

First, I went to see the concentration camp museum. It’s a good start to the tour since it presents you with a mild introduction to the harsh reality. I say it was a mild introduction since some parts of the barricade were repainted and had displays of various items. Later, when I went to see the actual prison cells and the crematory, the darkness and emptiness stunned me. There’s something in there that makes you feel shock, sadness, and freedom.

Fortunately, this tor, or door, has been closed, which brings me to the second tor I encountered in Munich.

“Drei ... Zwei ... Eins ... TOR! (3… 2… 1… Goal!)” was the only chant reverberating throughout the Allianz Arena (pictured above, courtesy of author), a soccer stadium and also the home ground of Munich’s two professional football clubs, FC Bayern Munich and TSV 1860 Munich. This imposing stadium, normally white, seats about 70,000 fans. The unique characteristic of this stadium is its outer appearance. It is lit up red when FC Bayern Munich plays and blue when TSV 1860 Munich does.

Just visiting the stadium got my adrenaline flowing. I can’t imagine how it must be to actually play there. The electrifying atmosphere, the expectation, the team spirit! What more could you ask for? Only, perhaps, a win.

That’s not the only time when I got an adrenaline rush in Munich. Other than beer and cars, the Germans are also famous for their autobahnen. An autobahn is a German federal highway, which is unlike any highway you see in other countries. Instead of having a maximum speed limit, these highways have an unofficial minimum speed of 80 mph. The lush, green, picturesque backdrop only makes the experience even more worthwhile. I still remember the thrill of driving at over 130 mph like I did yesterday.

Even though I was experiencing many firsts on my trip, toward the end of my stay, I found myself feeling comfortable in the local culture, so much so that eventually I started thinking in German. This was a big first for me, because in spite of my many travels, I have never experienced the culture of a country to have such a profound effect on me. So, although I miss the brezel, the beer gardens, and the S-bahns, I feel happy to carry a bit of Germany around with me.