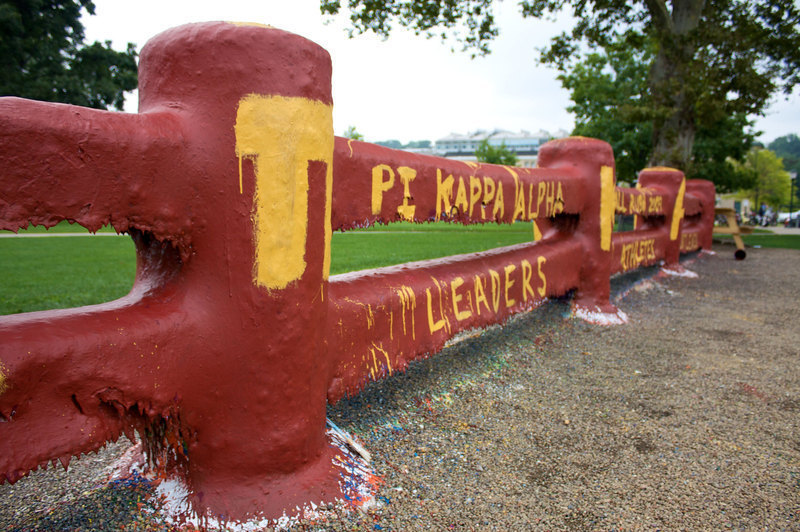 the Fence is an excellent location for student organizations to advertise. (credit: Travis Wolfe/Photo Staff)

Carnegie Mellon — like any other university — has its own share of obscure traditions. Be it wearing kilts and playing bagpipes or squeezing into those tiny cars called buggies or wedging bottle caps into the walls of Wean Hall, not every tradition has a history that is easy to understand — but that doesn’t mean that, as a fi rst-year, you shouldn’t try to fi nd out more. So, here’s the fi rst step in trying to uncover some of the most famous campus customs. The answers and histories behind a smattering of Carnegie Mellon’s most cherished (and most confusing) traditions lie before you.

Carnegie Mellon, among being a top-tier research university, networking center, and budding liberal arts college, is also one of the few schools in the nation that offers a degree in bagpiping. Andrew Carnegie, one of the two founders, was of Scottish heritage and harbored a deep love for his motherland, a feeling that is still present on the campus today. Bagpipers serenade the campus on warm evenings, the school mascot is a Scottish terrier (appropriately named “Scottie”), and a café on campus is named after Carnegie’s castle in Scotland, Skibo. As kilts are a trademark of Scotland, they are not an uncommon sight around campus as various students — and occasional faculty — celebrate the university’s heritage. Since coming to Carnegie Mellon, quite a few students have even expressed a desire to own a kilt of their very own.

Perhaps the most eagerly anticipated event on the school calendar, Carnival is a time for students to build, race, and have fun, though a lot of work goes into making it all come together.

The first part of Carnival is the buggy racing, or Sweepstakes. Buggies are small, one-person vehicles pushed up hills and steered by a driver who lays down head fi rst inside them. While there are only two race days in Carnival — the preliminary and the fi nals races — a lot of work goes into making Sweepstakes work throughout the school year. Every year, on the Saturday morning of and Sunday mornings leading up to Carnival weekend, Buggy teams from different organizations, Greek and independent, will gather behind Hunt Library and all along Flagstaff Hill to do “rolls,” or test runs to perfect steering and braking. There are four different types of jobs involved in Buggy: driving the buggy from the inside, pushing it, fi xing and improving it as a mechanic, and providing support by helping to coordinate rolls. At Carnival, all the organizations race against one another, trying to see which buggy can get through the course (a circle around Frew Street, Hunt Library, and the Phipps Conservatory) the fastest. The course is divided into several different hills, each with a varying degree of elevation. Depending on what job or jobs students have, the tasks they do vary. Mechanics often keep “garage hours” during the week, pushers train on their hill, drivers drive, and support personnel do a whole slew of tasks, from being fl agmen to helping transport different items.

Next is Midway. Visible from Forbes Avenue and held annually in the Morewood Gardens parking lot, Carnival’s Midway exhibit is a sight to behold. Student organizations who choose to participate construct a one- or two-story building or booth, inspired by a general theme. Last year’s Carnival theme was “Epic Adventures,” and past booths have been based on favorite movies, books, or events in history. The week before Carnival weekend is called “Build Week,” in which organizations pull their booths together after Move-On, the day when everyone moves their booth, in pieces, onto the Midway site. While Build Week is only a week long, preparations for booth begin in the fall semester. There is a student-run Carnival Committee that oversees safety, design deadlines, and sorts out which organization does what theme for their booth. Some organizations even start building parts of their booth months before Carnival, in order to make construction during build week easier and less taxing on their members. There are prizes given for the best booths in both the Greek and independent organizations, and these are always valiantly fought for.

Last, there are the mobot races, the most recent addition to the Carnival festivities. Started in 1994, mobile robots, or mobots, make their way through a course in front of Wean Hall — now you know what the curvy, white line is used for — trying to get through it the fastest without receiving guidance from their designer(s). The races, which draw huge crowds to the Mall, not only highlight how much more advanced technology has become, but also show how current Carnegie Mellon students are working to change the face of the robotics industry. By putting their innovative ideas to the test against their peers, students can take the reins in developing better technology.

Forget Facebook. If you have an event that you want the entire campus to know about, then taking the Fence is your fail-safe solution to getting the word out. Originally a wooden fence dividing the men’s side of the campus from the women’s, this Carnegie Mellon landmark has had a rich history as a social hub. Students have always been leaving messages at the spot, and gradually began painting them on the wooden structure. However, as time and the layers of paint progressed, the weight of the paint became too much for the wooden fence to hold, and it collapsed.

Nowadays, modern innovation has blessed us with a concrete Fence, one that will stand up to the slings and arrows of outrageous paint jobs without falling down under its own weight like that last one. The new fence is claimed to be the most painted-on object in the world. The Fence is conveniently located in the center of the Cut, easily visible from Forbes Avenue as well. The rules for painting the Fence have been passed down from student class to class and can only be transmitted orally. These rules include the specifi c times at which it is proper to paint the Fence, how long it’s considered “polite” for a single organization to have the Fence, and how the Fence must be painted. Curious? Ask an upperclassman for the details.

Keep in mind, though, that using the Fence as an advertising board is a great idea. It’s such a great idea that many organizations plan ahead before they’re going to take it. So, if you have an event and want to take the Fence, either work it out with the people who are in possession of it beforehand, or have a back-up plan. Chalking is another popular method of advertisement — as is evident from all the messages written on the ground everywhere.

Maybe you’re going to your programming class and noticed the bottle caps stuck in the walls. Are they an architectural touch or do they serve some greater, more meaningful purpose?

While this “tradition” doesn’t necessarily have a set time to take place (unless fi nishing a soda is a momentous occasion), it has been going on probably ever since students discovered the bottle cap-sized holes in Wean’s walls. Computer science major lore states that when all the holes have been filled with bottle caps, Wean Hall will assume its true form: that of a Transformers-esque, Awkward Turtle mecha, capable of doing epic battle with Hamerschlag Hall or the Cathedral of Learning (your choice). While this rumor has yet to be confirmed by the administration, all of the holes in Wean are yet to be filled.

Though one article could not hope to cover all the wacky things and traditions (and wacky things that are also traditions) happening on campus, it’s a start. The best way to discover more about Carnegie Mellon’s traditions is to get involved with organizations, whether it’s through Greek life, an independent organization, or with a bunch of friends. Traditions are most fun when they’re enjoyed by a group, and although Carnegie Mellon’s student base has a wide variety of interests, passions, and majors, there is one thing they all share: a drive to succeed in whatever they do, be it Buggy or Booth, mobots or the Fence. And that drive is perhaps the most cherished tradition of all.