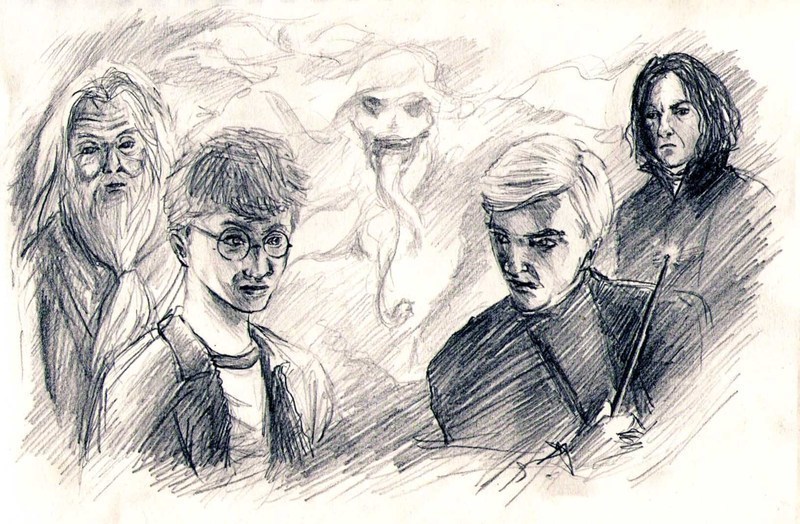 While the Harry Potter series of novels is complete, fans of this magical adventure now eagerly await the movies, both excited
and a little worried about what the ever-changing group of directors will do to their beloved canon. Casual moviegoers also flock to them, knowing that the special effects and story promise a good thrill, not to mention the enchanting actors, new spells, and twisty plot that will keep them on the edge of their seats.

Harry Potter and the Half-Blood Prince makes good on all these promises and more.

With the original trio — Harry, Ron, and Hermione, played by Daniel Radcliffe, Rupert Grint, and Emma Watson respectively — in their sixth year at Hogwarts, the fi lms have changed significantly from their inception. The three not only look older but have also honed their acting technique, making their performances in the sixth fi lm much more dynamic and convincing.

The film itself mostly adheres to J. K. Rowling’s tale, with a few scenes omitted in order for it to run in the allotted amount of time. While most of these omissions do not detract from the fi lm, avid fans and purists might be a disappointed to find some of their favorite lines missing from the fi lm’s script. Some compromises aside, to the average moviegoer with a basic amount of Harry Potter lore, the film will seem like a sped-up version of the book. To the viewer new to the wizard craze, the film might seem to move too quickly and leave certain questions unanswered about the plot. Hopefully, this will serve as a lesson to read the book beforehand.

That aside, the fi lm is masterfully crafted in and of itself. While in the previous installment, Harry Potter and the Order of the
Phoenix, the adventures into Dumbledore’s Pensieve may have seemed slow and too much like the other parts of the movie,
this is completely changed in Half-Blood Prince. Harry dives into a miraculous world of memories, fading in and out as the person recalls them. Quidditch scenes have the audience on the edge of their seats, while transitions between major events in the story refl ect the growing unease and rising tension between the forces of good and evil. Even small things, such as Horace Slughorn — played by Jim Broadbent — transfi guring himself back into a human from an armchair, or the reassembly of a ruined house, are given such attention that their details will amaze the audience. The cinematography and special effects, rather than leaving nothing to the imagination, actually end up provoking it. The audience will be treated to the wide variety of dazzling spells, extraordinary creatures, and thrills trademark to Harry Potter fi lms in a newer, cleaner light than previously shown.

As always, the acting from supporting characters is excellent. Alan Rickman as Severus Snape steals the show. His facial expressions, especially during a moment between Ron Weasley and Lavender Brown — played by Jessie Cave — in the hospital wing, are priceless. He has perfected his character, keeping Snape just as mysterious and oh-so-slightly ruthless as readers and watchers have come to love (or despise).

While Harry Potter and the Half-Blood Prince helps to answer more questions about the series, it leaves far more
unanswered. Harry and friends return to Hogwarts on a more somber note, with Harry harboring decidedly dark suspicions
about his classmate, Draco Malfoy — played by Tom Felton — and his allegiance. Harry once more stumbles across a strange
book, which claims to belong to the “Half-Blood Prince,” but he’s kept busy with schoolwork and winning over Slughorn
to probe too deeply into its secrets. Meanwhile, a dark plot against Dumbledore and the school unfolds, from cursed
objects to wizard duels, ending with a climactic twist. Overall, Harry Potter and the Half-Blood Prince is a must-see.
Even for those unfamiliar with the story, the visual effects and the scope of the actors is enough to warrant a visit to
the cinema. The characters, whether on the side of good or evil, or those who are teetering between the two, are played
masterfully and the plot is sure to have movie-goers yearning for more of this magical series.