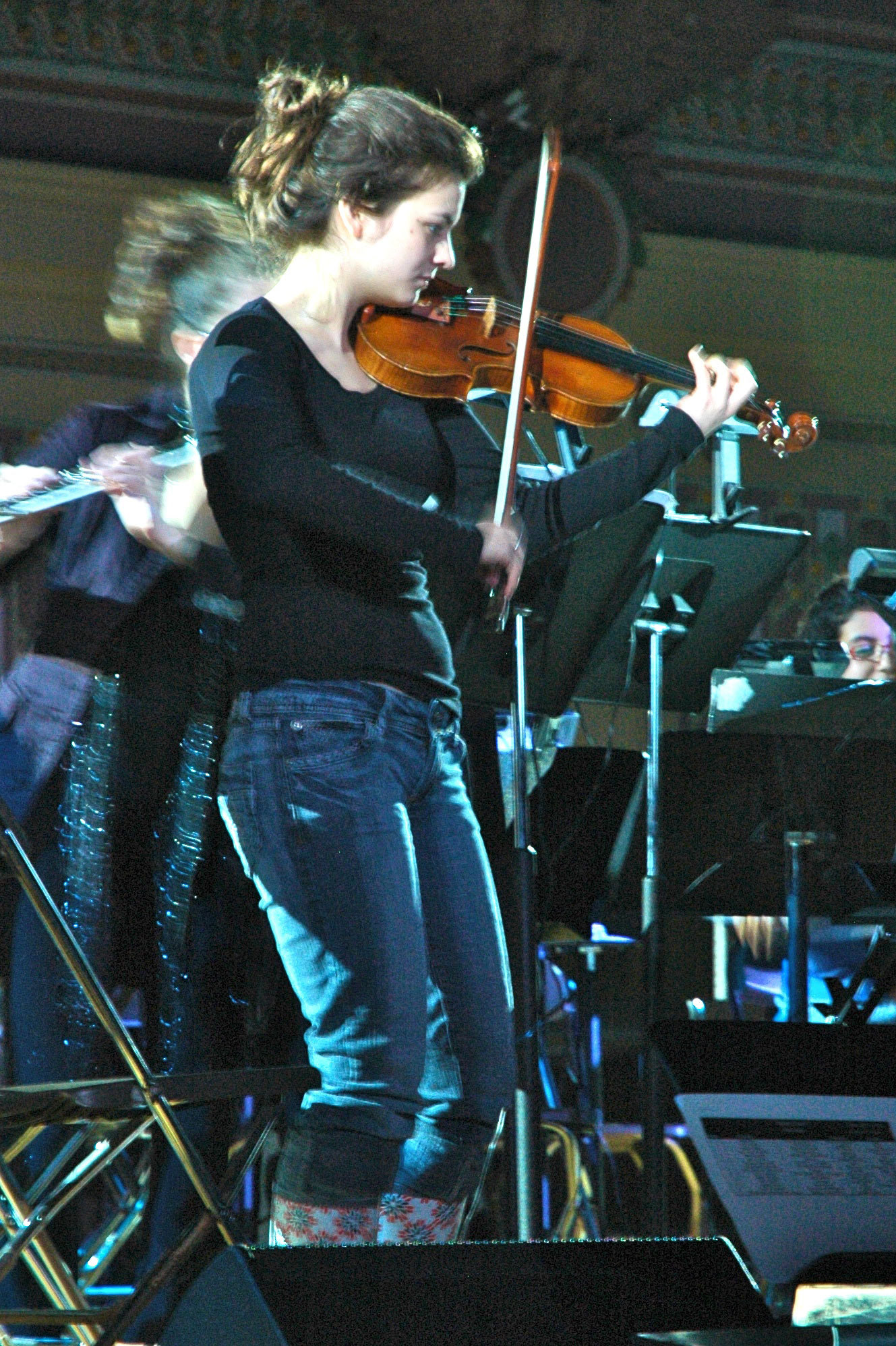 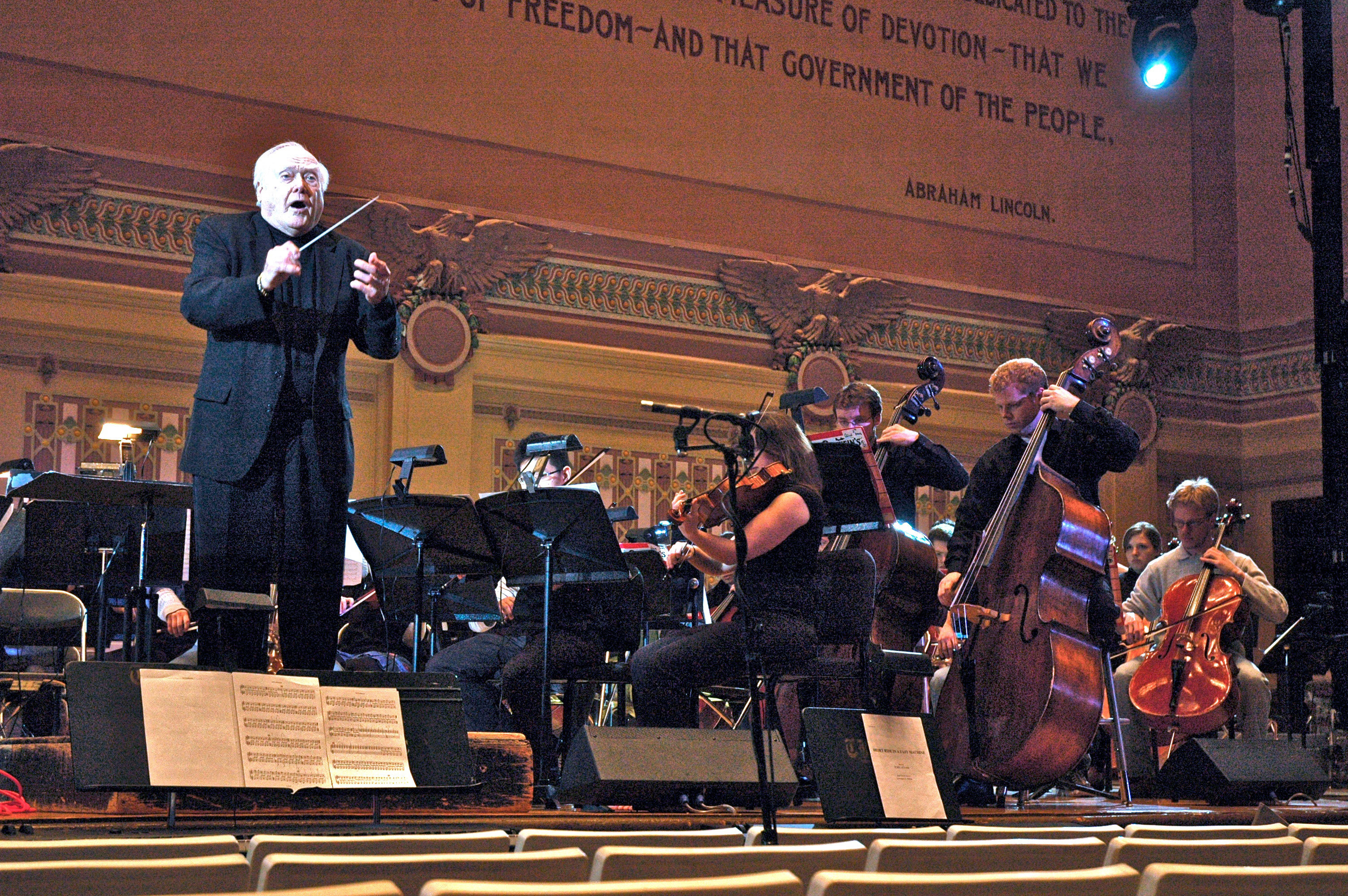 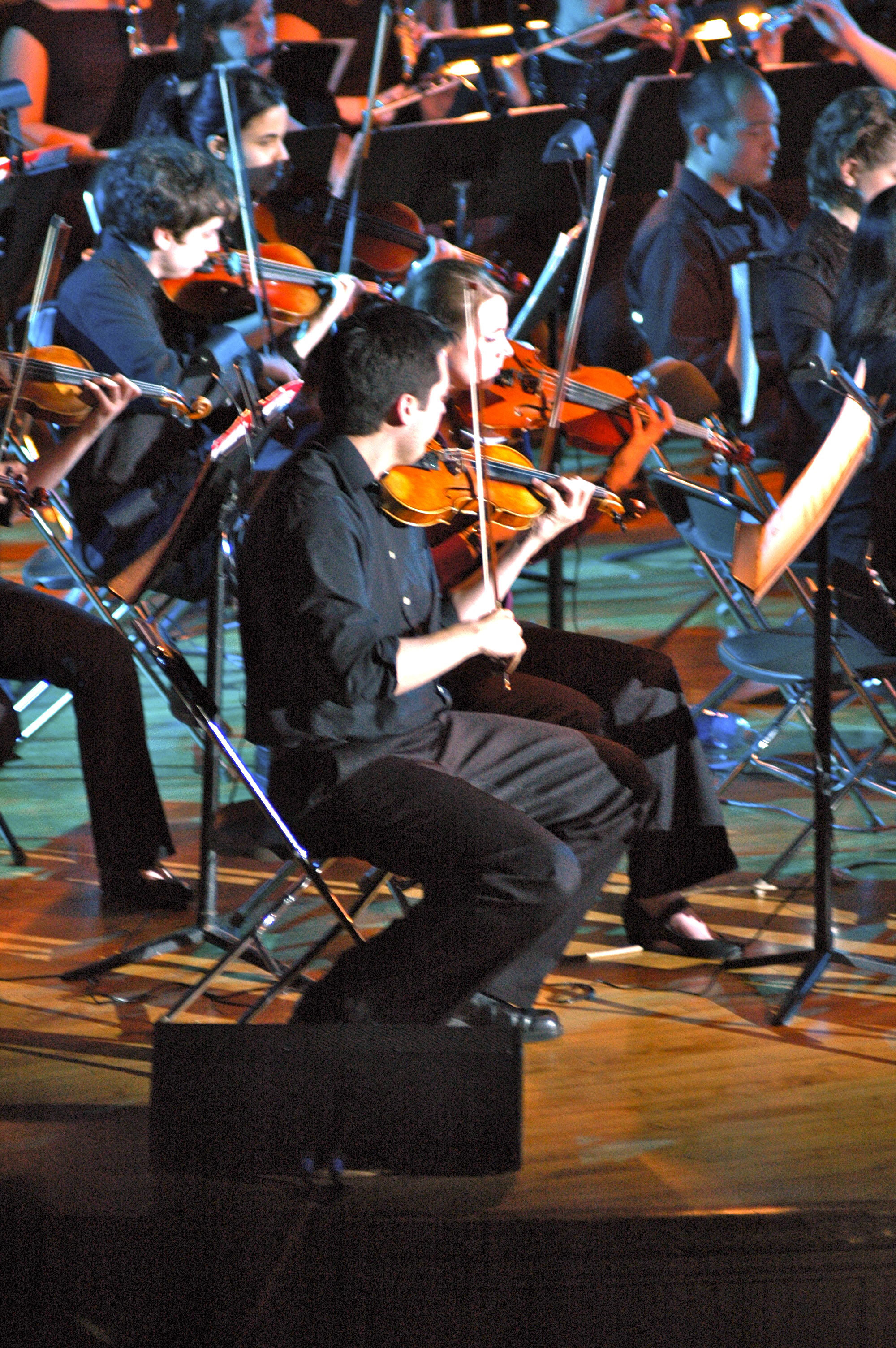 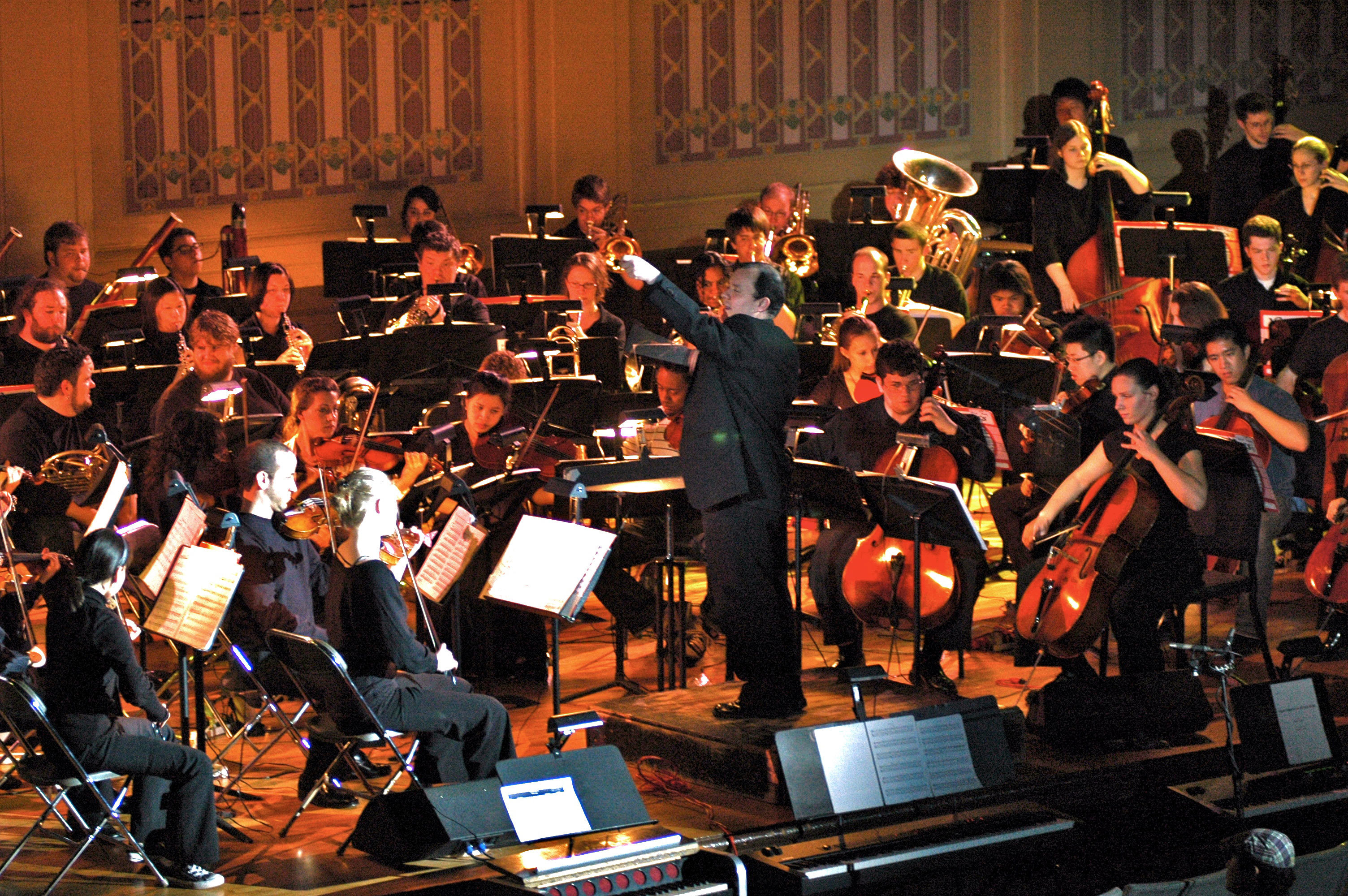 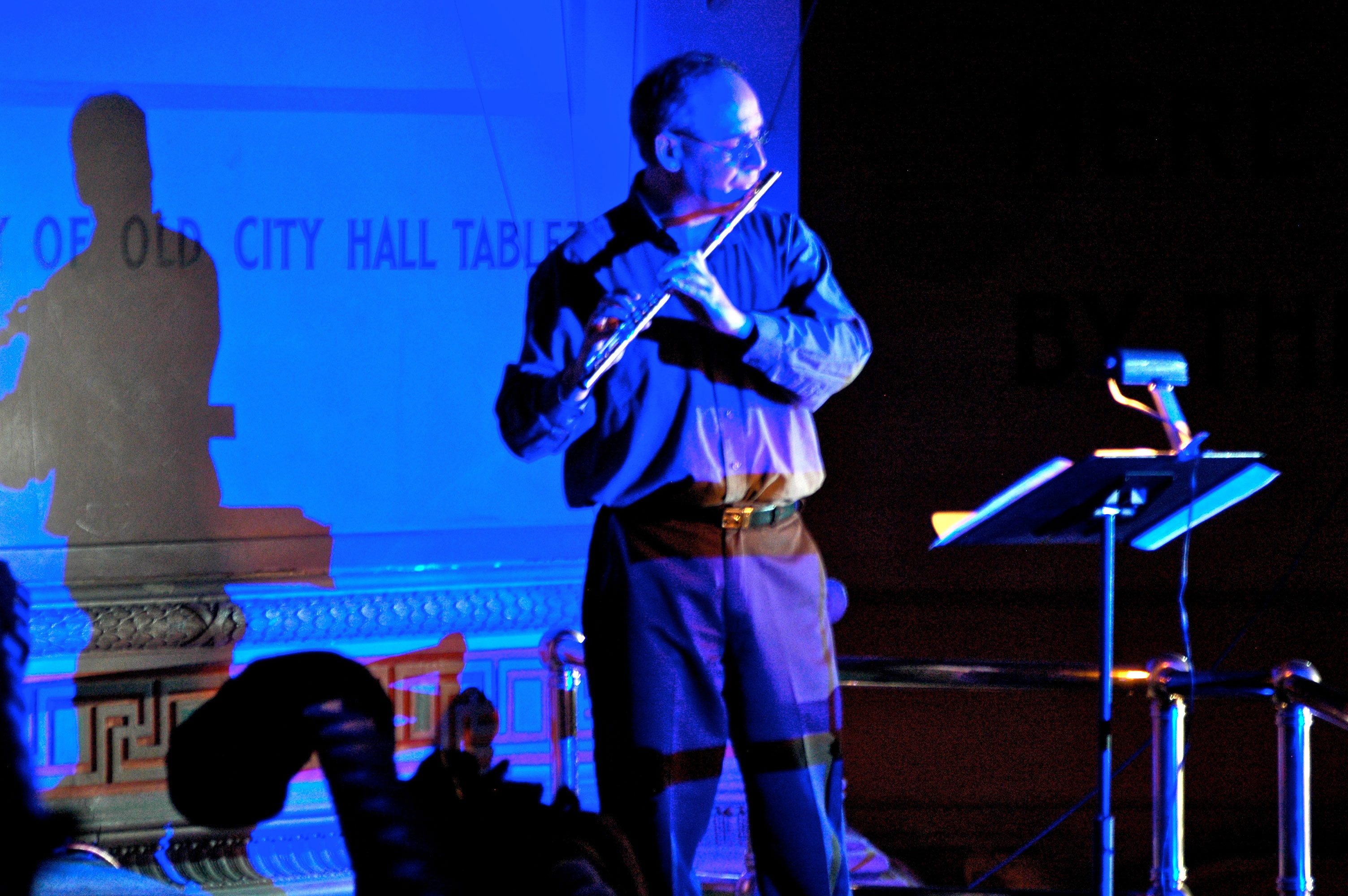 The walkie-talkie on Todd Brown’s shoulder is clicking and shuddering with activity. Through a gritty line of static, a voice emerges: “Are we ready?” Brown looks out onto Soldiers & Sailors Memorial Hall and takes a deep breath. “Okay,” he says. “Time to think.”

Brown is a lighting technician at Carnegie Mellon who, for tonight, carries a heavy responsibility. He is in charge of lighting for the School of Music’s Collage Concert, which took place at Soldiers & Sailors Memorial Hall last Friday night.

The Collage Concert is simple in concept. It is a 90-minute, non-stop performance, featuring all the major music ensembles at Carnegie Mellon, with additional performances by School of Music professors and alumni.

The execution, however, is complex. How do you fill such a massive space with sound and keep it up for 90 straight minutes?

The answer lies with Brown and his colleague, Karla Boos, who is directing the event. The key, according to Brown, is the careful positioning of the different ensembles in different parts of the venue. For example, when an ensemble finishes performing on stage, another ensemble begins on the balcony.

Though Boos handles the positioning, it is Brown’s burdensome job to make sure those who are performing are seen (and not blinded), while muting the movement and activity in other parts of the hall. “A lot of it is on me,” Brown said before the performance. “I’m feeling the pressure.”

The first spotlight of the night is not on any of the evening’s performers. Instead it is on Noel Zahler, head of the School of Music. It was Zahler who brought the idea of a Collage Concert to Carnegie Mellon from the University of Minnesota, where he used to serve as head of School of Music. “We live in difficult times,” he said. “People say music [is] at the periphery of what we need to. I would counter that music is the most important thing that we need to do.”

Brown sits at his lighting station — which, with dozens of blinking lights and flashing icons, looks more like the bridge for the Enterprise than a computer. He is poised and listening attentively. When the speech is over, he swings into action.

With the flick of a wrist and the smack of a finger, the room bursts into a deep shade of blue and the Carnegie Mellon Philharmonic pounds out Dmitri Shostakovich’s thundering “Festive Overture.”

The orchestra soon dissolves into silence and glides off stage as a moody white light now shines on the balcony. At its nucleus stands Alberto Almarza, a professor of flute and music history at Carnegie Mellon. Accompanied by a dancer, Almarza begins with nimble fragility, confident of the musical space he is occupying. Then, from the corner of the balcony, a photographer emerges. He’s standing right between Brown and Almarza, making it impossible to see if the lights are in the right position.

“He’s in my line of sight!” Brown says. The cameraman is clicking and approaching Almarza fast. Brown leaps out of his seat, onto his tiptoes. Almarza is now growling and screeching through his flute. The dancer is in full-sway, her gestures becoming more and more animated as the music pulses, pulses, and builds.

The shutter goes off until, finally, the cameraman ducks away. The music calms. The dancer slows. The light is still in the right place when the song ends. Brown sits back down and takes a deep breath.

There are different definitions of the word “collage,” but according to the academic powerhouse Wikipedia, it is a “work of formal art ... made from an assemblage of different forms, thus creating a new whole.” During the jazz vocal ensemble’s version of George Gershwin’s “Embraceable You,” one of these “new wholes” is created.

Unfortunately, Brown can’t capture it with lighting. That’s because it comes not from any of the singers, but from an anonymous member of the jazz ensemble, who is positioned in the opposite portion of the balcony. As the singers belt with raucous enthusiasm, the jazz musician beatboxes, head-bobs, and jams along with singers. It’s comical at first, but on second look, it’s empowering; he’s sitting in the dark on the opposite side of the balcony and still feels like he’s got something musical to contribute.

This jam is representative of how well many of the musicians in this community relate to and communicate with each other. It’s not a new concept that musicians of different backgrounds and training can co-mingle, but it’s an impressive moment when the idea is played out.

It’s not the anonymous jazz musician’s only musical endeavor of the evening, either. Brown’s lights soon go up on the balcony in full flare, now shining on Carnegie Mellon’s jazz ensemble itself. They perform “Cover,” a piece written by junior composition major Alex Weston.

It’s exuberant music that passes through heavy-handed rock beats, airy jazz solos, and odd time signatures with great ease. Though Weston said it wasn’t he who was grooving with the singers, it might as well have been; he seamlessly internalizes music of many disciplines.

For the final number of the evening, the Carnegie Mellon Philharmonic Concert Choir, as well as various soloists, join together for a rendition of Leonard Bernstein’s “Candide: Make Our Garden Grow.” The Philharmonic and soloists fill the stage, while the choir — dressed in regal robes and tuxedos — swarm the aisles.

No special lighting is needed now, as the physicality and geometry of so many musicians performing together is dramatic enough. Brown turns off his own lights and turns the house lights on. “We’re neither pure, nor wise, nor good,” the choir sings, echoing Zahler’s comments on today’s complicated economic, political, and cultural climate.

The song resolves, however, in true Carnegie Mellon fashion: “We’ll do the best we know.”