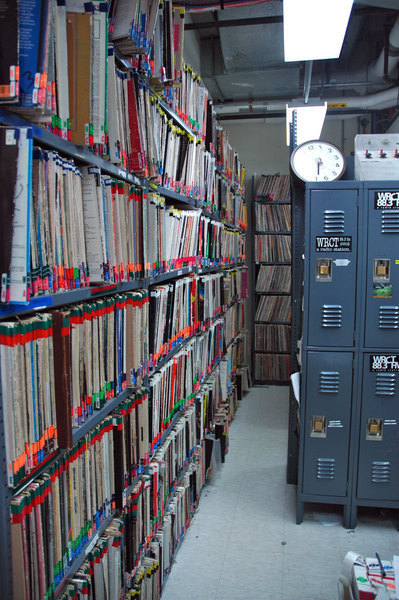 The library of WRCT holds over 70,000 vinyl records and cds. It stands as a testament to the radio station’s commitment to different music. (credit: Jesse Kummer/Photo Staff)

One of Carnegie Mellon’s largest and most successful media organizations celebrates not one, but two anniversaries this year. While many students may have noticed WRCT’s recent 35th anniversary party at the Shadow Lounge, this year WRCT celebrates 60 years at the forefront of college radio stations.

Started in 1949 as a small project in Porter Hall by the electrical engineering department, the ancestor of WRCT lived the first 25 years of its life as a small AM outfit, heard only on campus. Then, in March of 1974, some time after receiving its current call letters, WRCT hit the FM airwaves for the first time.

Over the past 35 years, WRCT has grown into one of the most powerful college radio stations in the country, broadcasting at 1750 watts, with a listening radius of up to 17 miles. (The University of Pittsburgh’s radio station, WPTS, broadcasts at 16 watts.)

The station’s power and roots in electrical engineering are what attracted Larry Berger, the long-time host of Saturday Light Brigade, an early Saturday morning children’s show on WRCT.

Berger, a Carnegie Mellon graduate from chemical engineering and engineering and public policy, had already been in radio for seven years with free-standing Pittsburgh station WYEP before he stepped onto campus and made up his mind that he was not going to join WRCT. Seeing the station, however, promptly caused him to reconsider.

“First and foremost, the technical plans, design, engineering, and equipment [were] all really, really strong for live interviews, remote broadcast, and music playing,” said Berger. “[WRCT was] always on the cutting-edge of having the right equipment [for] great radio.”

After years of hosting the popular Saturday Light Brigade on WYEP, Berger and the show’s board of directors decided in November 2002 to change the show’s affiliation to WRCT.

“We asked: How [could we] best serve the community? By aligning ourselves with an organization that is very interested with education and technology and the interfacing of both of those things with the community,” Berger said.

Shows like Berger’s are possible because, unlike the majority of college stations, WRCT is entirely student-run and produces nearly all of its own content. It allows anybody — not just Carnegie Mellon students — to host radio shows.

According to Alex Smith, current training director, past general manager of WRCT, and master’s student of logic, computation, and methodology, these idiosyncrasies are part of what has allowed WRCT to gain such a strong following in the Pittsburgh community and pursue a creative track that other stations cannot keep pace with.

With the sole responsibility for its creative content, WRCT has talk shows in three different languages, music directors for 15 different genres, and nearly 40 diverse programs.

“We play it if it is good and you can’t hear it anywhere else in Pittsburgh. If other stations are playing it, then we don’t anymore,” Smith said. “Our goal is exposing people to stuff they will like if they give it a chance.”

According to Smith, the station does not play top-40 hits, which is not hard, considering the nearly 70,000-item vinyl and CD collection the station has tucked quietly into a crevice in the basement of the University Center.

This library has inspired more than its fair share of students.

“You come in to do a show being interested in a genre and leave being into music,” Smith said.

This was certainly true for DJ Jason Toyger, a 1996 professional writing alum and current editor of the School of Computer Science publication The Link.

Toyger joined WRCT after his graduation in 2001 following a brief stint in professional radio.

Toyger’s show began as a free-form rock and roll program, which he admits seemed like the quintessential college radio program at the time.

In typical WRCT fashion, however, Toyger didn’t want to be doing what everyone else was doing and began increasingly attracting the high-energy, over-the-top radio of the 1950s and ’60s.

“I didn’t want to be playing what they were calling ‘oldies,’ ” said Toyger, who plays bands like The Ronettes, The Coconut Coolouts, and The Kinks on his show, Radio 9.

“There was no reason to imitate commercial radio, but the stuff I started imitating was 40 or 50 years old.”

Toyger is part of WRCT’s alumni and community support base, which, according to Smith and Toyger, is part of the reason WRCT has such a distinct sense of its history and culture.
Berger agrees.

“In 2003, I returned to the same culture that was there in the 1980s — the same goals and service values,” Berger said, who lauds WRCT for its commitment to serving the community of Pittsburgh. “Being a jukebox is not good enough. Creating something no one else can create — live when possible, local when possible — is the best possible use of radio.”

According to Smith, the future of the station, like that of so many media outlets, is tied to the pressures of emerging new media. While WRCT already streams its content live over the Web, it must now turn an eye toward creating podcasts and other technologies that will allow it to reach its audience. Smith doesn’t think the technological leap will cause the station to lose any of its character.

“We’re committed to underrepresented music,” Smith said. “People here are into radio for the love of the game.”