Itkowitz, Godbole look back on year of service 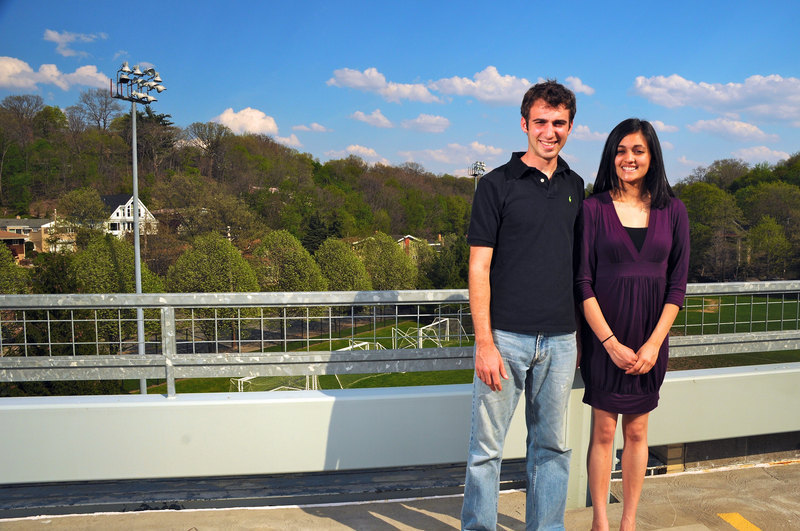 The administration of Jared Itkowitz and Pooja Godbole has come to an end as they pass the torch of student leadership and service on to Rotimi Abimbola and Adam Klein.

When Itkowitz and Godbole reflect on their tenure, there are many accomplishments to highlight.

“We ran on the platform of programs to unite our campus,” Itkowitz said.

“The first was Football Frenzy, which encouraged students to attend home games and support our teams. The second was the creation of the Loop Bus, a shuttle that runs from campus to the South Side, Station Square, and downtown. We had 760 students in the first five weekends and recorded 100 riders per night. Finally, our safety and dining task forces collaborated with undergrads and graduates, using surveys as a benchmark to report progress.”

Godbole elaborated, saying, “We presented this to the administration and they really took it to heart. They opened the Maggie Murph Cafe to 24 hours, making changes to pedestrian safety and meal plans. There’s some things we need to maintain throughout this year. For example, we took [surveys] in Student Senate; 64 percent said the transportation fee needs to be increased for services.”

Godbole suggested that “Rotimi and Adam could work on Football Frenzy and maybe extend it to basketball and non-athletic events.”

“The President’s Cabinet, which serves as an advisory group to [President Jared] Cohon, is able to do a lot more than we could have done ourselves,” Itkowitz said. “We also built relationships with Pitt, lobbying on their campus and in Qatar, where Rotimi has been pretty active.”

“There are a few things that we can improve,” Godbole said.

“There is a lot of diversity, but not everyone collaborates where they should.”

Itkowitz agreed. “Students have a lot of pride in the individual, but not in CMU as a whole. Things like Football Frenzy and the Loop Bus will get students excited about the city and be a good opportunity to meet people.”

Durng their tenure, the two wanted to take the two first steps in their platform in seven major areas.

Godbole felt that their goal was accomplished, and Itkowitz agreed, saying, “I feel satisfied that we more than accomplished what our platform proposed.”

Although Itkowitz admitted there were some things left unfinished, like the plaid crosswalk and perimeter flags, he said, “At least those ideas were planted, and Rotimi and Adam will make them grow and see them come to fruition.”

Godbole discussed some difficulties in learning her role and the policies surrounding the job.

Itkowitz added, “I learned them and it was a really good experience. After doing this for four years, though, sometimes you run out of fresh ideas.” Some of the bigger challenges included working with the administration and organizing Homecoming.

He said members of the administration were “really easy to work with. After convincing them about the Loop Bus, they were incredibly supportive of Football Frenzy. During Homecoming, more than 20 students were on the committee for B There, a campaign run through the alumni office to raise a billion dollars. Organizing the ESPN game, dance, and the Fence -- it was a task getting all these variables in place,” Itkowitz said.

Godbole gave some advice to the future student body leaders. “Nothing’s impossible, really. This is a campus where if you’re passionate about initiative, the support is there,” she said.

Itkowitz commented about the campus as well, calling it “unique because CMU is not averse to change. We did more events and programs that had a direct impact on students. I am confident that Timi and Adam will continue to expand the CMU experience in their platform.”

The Student Senate elected an executive committee on Thursday night. “As representatives for the students, administrative leaders will be looking to Timi and Adam for student responses,” Itkowitz said. “This combination of student government and student organizations will be a nice mix.”

Editor’s Note: Sabrina Porter contributed to the reporting of this article.