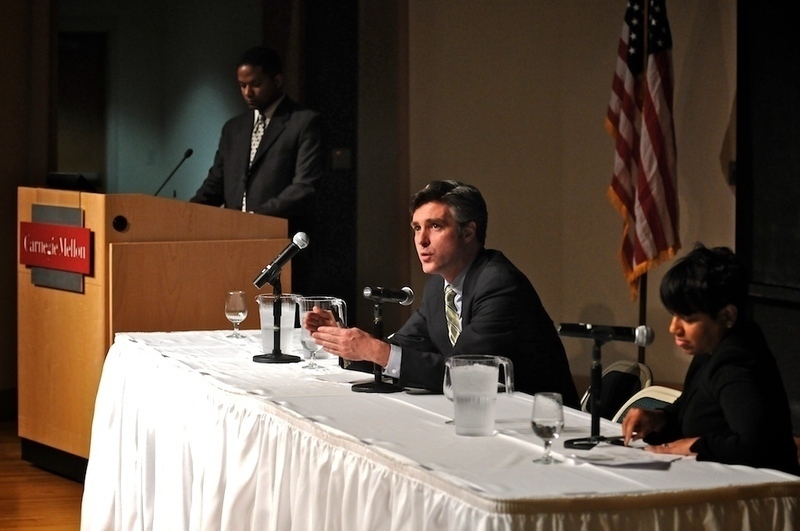 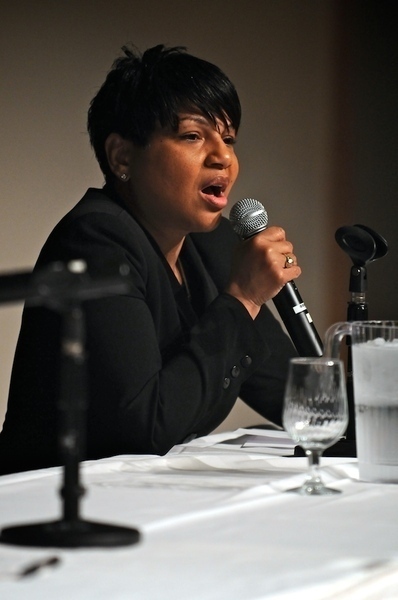 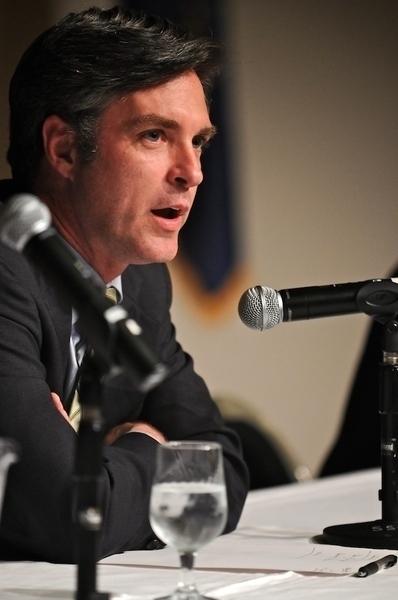 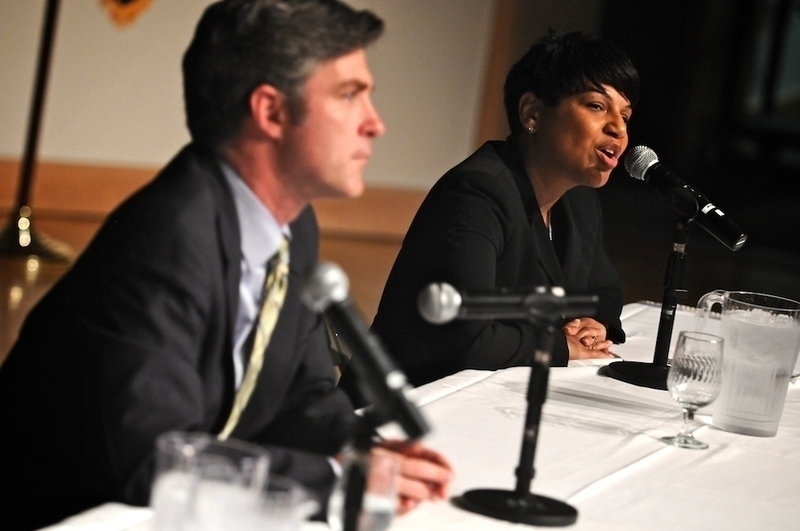 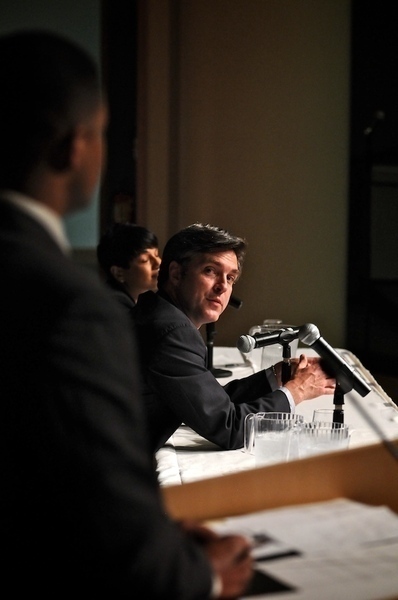 Current Pittsburgh mayor Luke Ravenstahl, who faces Dowd and Robinson in the May 19 primary election, was not in attendance. Debate moderator Vince Sims, of WPXI-TV, announced that Ravenstahl had been invited to the debate, but that his campaign said the mayor had another commitment.

The mayor’s absence was conspicuous at many points during the main portion of the forum, as Dowd and Robinson took turns refuting his policies. In her opening remarks, Robinson criticized Ravenstahl’s announced $1 million surplus, countering that “he doesn’t tell you that we have looming debt due ... that will cut into that by 200 percent.” Dowd, in turn, attacked the mayor with, “What we need is leadership. We do not have it and we need it.”

Speaking in response to a mix of prepared questions from Sims and open questions from the audience collected via notecards, Robinson and Dowd addressed such topics as the city’s population loss, crime rate, public transportation, and proposed merger with Allegheny County.

Robinson, an attorney and 15-year veteran of the Pittsburgh Bureau of Police, sketched out her platform on a series of neighborhood-based initiatives designed to reduce violent crime and promote small businesses.

“Violence is a preventable illness, and we need to get to the core,” she said. Robinson proposed the funding of new neighborhood recreation centers, community gardens and farms, and a reallocation of tax abatements to new businesses in the city’s neighborhoods rather than downtown.

“We’re constantly using our middle-class dollars on big-tent tactics,” she said. “Only a few neighborhoods are getting fed with our current leadership.”

Dowd, who on the Pittsburgh City Council currently represents a district of neighborhoods north of campus stretching from the Strip and Bloomfield to Highland Park, advocated a city government “that’s not for sale.” He supports an increased collaboration between the city's administration and the Pittsburgh Board of Education, of which he was previously a member. He also pointed to his own experiences as a graduate student at the University of Pittsburgh in addressing city housing.

“We were able as grad students to buy a house in the city of Pittsburgh,” he said, before proposing a plan to sell city-owned vacant homes “for very small dollars” to young people on conditions that they would live in the houses for a certain length of time.

Though the candidates often came across as united in criticism of the Ravenstahl administration, a difference between the two first emerged in the matter of the police force. Calling for stricter enforcement of traffic laws in connection with neighborhood walkability and bikeability, Dowd said that the city currently lacks a sufficient traffic division.

“That’s the one thing I can say that we do well,” Robinson shot back.

Public transportation also turned into a sticking point, with Dowd first speaking in favor of the Port Authority’s North Shore Connector — a 1.2-mile extension to the downtown subway system — and saying that it could provide the opportunity to construct a direct link to Pittsburgh International Airport. Robinson, referring to the project as the “tunnel to nowhere,” questioned its worth and said her transit solution would be to subcontract certain services of the Port Authority out to private businesses.

A final disagreement between Robinson and Dowd concerned a proposed merger between the city of Pittsburgh and Allegheny County. Robinson said she was the only candidate who was against it, although she said she would support a consolidation of some services to increase combined purchasing power, for example.

“If you played Sim County,” responded Dowd, “you would not win if you had 131 municipal school systems.”

In keeping with the university setting of the debate, Sims asked the candidates a number of questions about how each would keep young people in Pittsburgh or why they would want to live here.

Robinson said she was considering creating a Department of Neighborhoods and would appoint young people to it. She also proposed extending the current Pittsburgh Promise scholarship program to middle school students.

“Young adults ... are certainly our future,” she said. “I know that sounds corny, but in terms of tax dollars you really, really are.”

Dowd emphasized attracting more venture capital to the area and connecting young entrepreneurs to legal and other experts who can help them set up businesses. He also pushed for an increase in younger workers among the city’s administration, starting from internships and continuing into new waves of full-time workers.

“It’s a great place to work and we need your help,” he said.

“They could use a few good engineers,” Robinson added.

At the end of the two-person debate, Harris, a 29-year-old independent candidate, spoke for three minutes on his own platform for mayor. In his view, young people want to come to Pittsburgh, but the city doesn’t offer them a way to stay. He outlined a platform based in “strategic” entrepreneurship, focusing primarily on technology companies and new neighborhood businesses.

“Why have we not had that Google or that Yahoo or that next young company?” he asked.

Harris is a 2008 graduate of a joint MBA/J.D. program between Carnegie Mellon’s Tepper School of Business and the University of Pittsburgh’s School of Law.

The Mayoral Candidates Forum was organized by the Pittsburgh Urban Magnet Project, in partnership with the Urban League Young Professionals of Pittsburgh, Leadership Pittsburgh, the Young Republicans of Allegheny County, the Pittsburgh City Paper, and Carnegie Mellon’s student government.