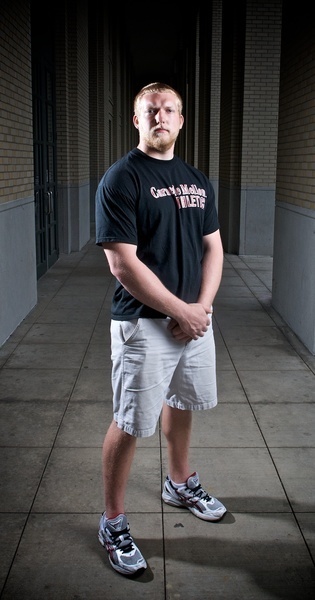 Junior James Hulley is making a big name for himself on the Carnegie Mellon track and field team that matches his physical stature. Hulley set school records in the shot put and discus events this past Wednesday in the home tri-meet with Seton Hill University, Franciscan University, and Duquesne University. This is continuing a pattern of success from earlier this year, as Hulley and senior runner Brian Harvey represented the Tartans at the NCAA Indoor Track and Field Championships. When asked what he was most looking forward to upon coming to Carnegie Mellon, Hulley replied, "I was looking forward to being a collegiate athlete when I came to CMU. I really enjoy being on the track team. I know athletics are not really idolized here at this school, but I really enjoy being a part of something bigger than myself."

With backgrounds in engineering from his father and art from his mother, Hulley had a penchant for building and taking things apart as a child. Hulley maintains this inclination by pursuing a degree in mechanical engineering. He hopes to stay athletically active throughout his life, while also pursuing a career in mechanical engineering and having a family. Hulley sees himself volunteering as a high school throwing coach, with the possibility of competing in the masters division of track and field.

Hulley is a native of Northhampton, Mass., and is the youngest of seven children, with two of his sisters adopted from Russia. His close-knit home ties have kept him motivated to perform in athletics and academics. He will be spending most of this upcoming summer in Pittsburgh preparing for his final season of competition, but will be making visits to family and friends back in New England. While on campus, Hulley is involved with his fraternity, Sigma Phi Epsilon, and participates in its activities and efforts, most recently with Spring Carnival Booth and Buggy.

Unfortunately for Hulley, his parents discouraged him from playing football, which is what he would loved to have played if he had not been participating in throwing events. However, he is excelling in the sport that throwers like himself prefer to call "Field and Track," and is looking to continue his success as the season comes to a close in the next few weeks.

The Tartans will be hosting the University Athletic Association outdoor track and field championships this coming weekend, April 25 and 26, where they look to defend their conference championship title from last season. The action will begin at 10 a.m. and continue throughout the day in Gesling Stadium.