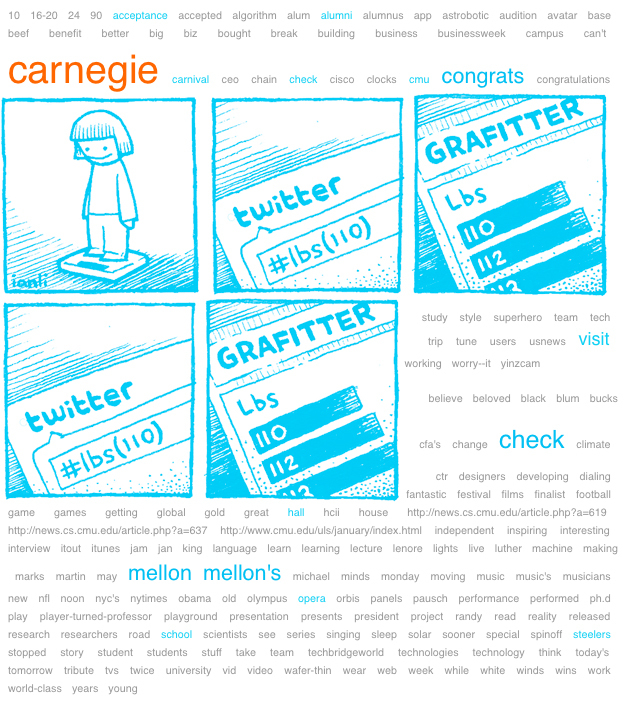 Most at Carnegie Mellon know that the smiley emoticon was invented by one of our very own professors. What many students may not know, however, is that that invention led to an award bearing the emoticon’s very own name — the Smiley Award — that rewards innovation in technology-based person-to-person communication.

The Smiley Award, which is distributed by the School of Computer Science, is generally given to projects that are clever and relatively small or underground, in the spirit of the original emoticon. The judging for the award is based on effectiveness, creativity, and fun, with “extra credit” being given if the project is actually in use, understandable to the public, and/or a small idea that has a big effect.

This year, the award was given to human and computer interaction Ph.D. student Ian Li for his Grafitter project. This project, a Twitter-based application, allows you to send extra information while updating your Twitter status, and then visualize the information in the form of graphs on the Grafitter website. Li felt that winning the award was beneficial to both him and his project.

“Winning the Smiley Award was a great honor. It is great that the School of Computer Science has such an award to encourage fun projects. The Smiley Award was also a good way to advertise Grafitter, so that more people will benefit from the service,” Li said.
Li explained that his background in personal informatics and developing applications to help people learn about their habits and behaviors helped him come up with the idea for the application.

The Grafitter application allows you to track these behaviors without having to go through the tedious manual entry by embedding the information in something you are already doing, such as changing your Twitter status.

The application has recently been updated, and now the application is usable not only by sending extra information through Twitter, but is also compatible with Blogger, Delicious, AIM, and Google Talk.

Li’s research is very interdisciplinary, which he attributes to the research style at Carnegie Mellon and his home department. Anind Dey, one of Li’s advisers and an assistant professor of human-computer interaction, believes Li’s interdisciplinary work helps add to his creativity, which he believes is Li’s biggest strength.
“His creativity stems from his strong backgrounds in computer science and art, both of which fuel his creativity and his focus on social applications and visualizations,” Dey said.

Both Dey and Jodi Forlizzi, another of Li’s advisers and an associate professor of human-computer interaction, are optimistic about the impact that Grafitter could have. “Personal informatics systems, such as Grafitter, give people the power to track and become aware of their routine behavior, and to identify patterns that might help them to change their behavior in positive ways,” Forlizzi explained.

Dey believes that the potential for Grafitter’s success can be seen through the now-famous New York Times visualization that analyzed Twitter feeds during the Super Bowl. As of now, the only way of visualizing Twitter feeds is text-matching; however, Grafitter offers a new and unique way of analyzing the feeds.
“Grafitter would allow individuals to better understand the kind of content they have been producing and understand the patterns in their lives for any behavior they use Twitter to report on. It also allows this easy sharing of information (the main benefit of Twitter) with others to be made that much more valuable, as they can also see and identify patterns and comment back,” Dey said.

You can check out Grafitter at www.grafitter.com, or any of Li’s previous projects at www.ianli.com/research.