CMU students bring the Penguins straight to your phone 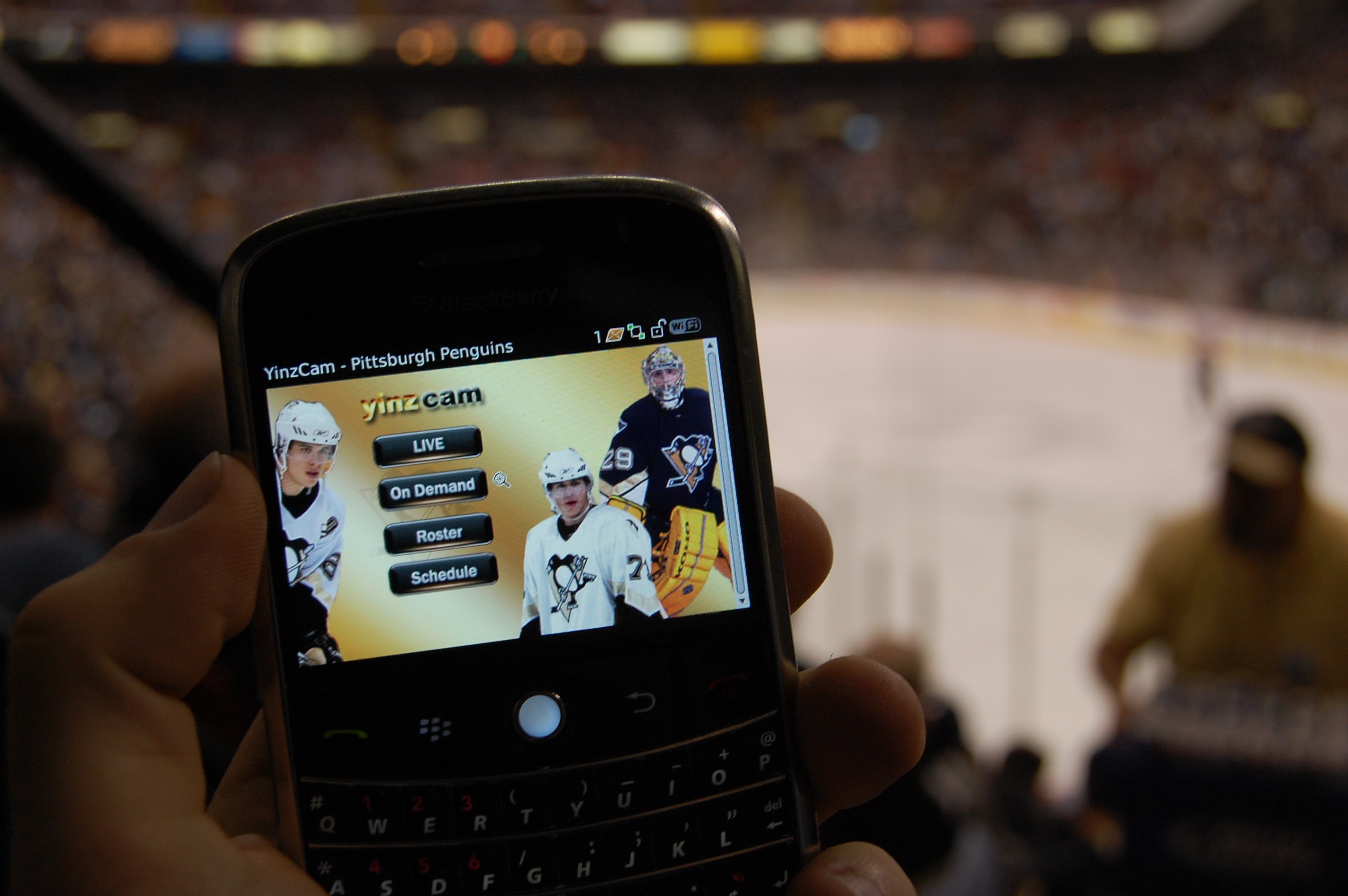 The Yinz Cam allows viewers a close up view of Penquins games at the Mellon Arena via their cell phones. (credit: Courtesy of Priya Narasimhan)

Getting nosebleed seats at the Penguins game won’t seem so bad with the recent launch of a new mobile video service known as the “Yinz Cam.” The Yinz Cam was developed by Priya Narasimhan, an assistant professor of electrical and computer engineering and computer science. The project, which was started about a year and a half ago, aims to bring free, live, close-up video footage from Penguins games to fans through Wi-Fi–enabled devices. It was launched at the Mellon Arena on Feb. 6.

According to a Carnegie Mellon press release, Narasimhan included the project in her capstone course on embedded systems. The final result of the project was installed at Mellon Arena. The system works through a Wi-Fi network, which was installed by Narasimhan’s group inside the Arena. The network enables the Penguins to provide the system with feedback through cameras placed at various locations around the arena. The system then sends the feed to the fans’ Wi-Fi–enabled devices, including the iPhone, iPod Touch, Samsung Omnia, Nokia 95, Blackberry, and phones running Google Android. Thus, the system enables users to obtain video footage from various camera angles around the stadium, such as near the goalie, the bench, and unique tight shots.

Since their product launch, Narasimhan and her research group have been reviewing the feedback received from users. “We’ve gotten great feedback on our Facebook group,” Narasimhan said. “People have gotten very excited about it. We’ve even had fans start posting their own photographs of what they saw, which is really nice. It is really great to have a fan capture what they saw and post it.” The team plans to use this feedback to make further improvements in the system. In addition to providing live-action footage, the system also has many other features, such as On-Demand, which enables users to view video clips from previous or current games; player rosters, which provide player statistics; and schedules, which allow users to find out when the next game is. As an added bonus, the system also has two unique features known as “Restroom Cam” and “Food Cam,” which give the users information on how long the lines are at concessions stands and restrooms.
The team had to overcome several challenges during the development of the Yinz Cam system. The Wi-Fi network needed to cover the entire arena and also needed to be able to handle up to 17,500 users. Security was also a concern, since content could not be taken out of the arena due to conflicts with broadcasting rights with the television networks airing the game.

Despite the challenges, the team has had a lot of fun developing the system. “It has been a great learning experience to develop technology for a professional sports team, especially since I get to go watch Sidney Crosby play,” said Michael Chuang, a Ph.D. student in electrical and computer engineering. “For a sports fan, life doesn’t get better than this.”

Approximately 100 people used the system during the first day of its release. Since then, the number of users has been increasing with every game. Narasimhan and her group are currently making efforts to advertise through their Facebook group as well as by handing out instructional brochures for using the system at the Penguins’ games. While the initial launch of the system has proven to be extremely successful, Narasimhan and her group are still making efforts to improve it by adding new features. Upon request of the users, the team is currently working on integrating audio into the system.

Narasimhan also hopes to make the system more dynamic by adding more social networking features, such as allowing users to provide their own feeds so others could view them. “Right now you’re getting the feeds and you have access to it,” Narsimhan explained. “But wouldn’t it be great if you could see what that other guy in the front was seeing too?” She also has hopes that this kind of system could be used during campus events, such as commencement.
For Narasimhan, the best part of the project is being able to work with such a great group of students. “I am very, very, very lucky to have these students,” she said.

“They go in assuming nothing is impossible. They’re way smarter than I am and they know it. It’s the most amazing feeling to work with people like that.”

To learn more about the Yinz Cam, visit http://facebook.yinzcam.org and http://twitter.com/yinzcam.