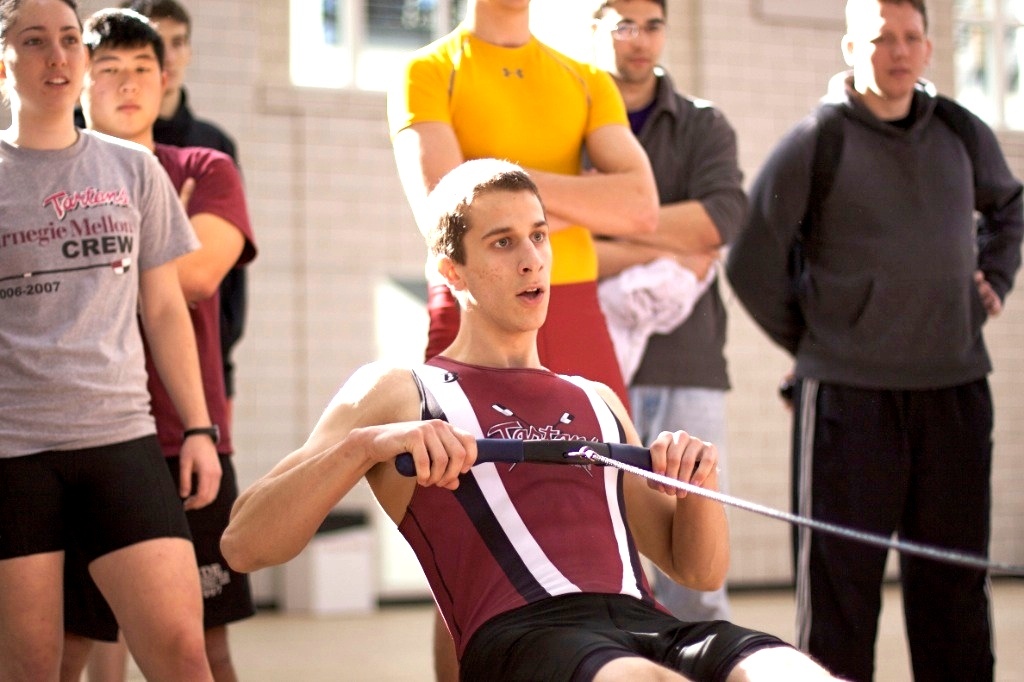 Carnegie Mellon rowing hosted the Heart Attack Erg Race in Wiegand Gymnasium last Saturday, with the University of Pittsburgh, Duquesne University, and John Caroll University in attendance. Pitt victoriously took the race with a total of 98 points. Carnegie Mellon followed behind with 78 points, and Duquesne (18) and JCU (10) took third and fourth, respectively. Carnegie Mellon tied Pitt in four first-place finishes, with much success from the novices who competed in their first collegiate erg race. First-year novice Grant Wilson placed first in the men’s event.

“We’ve got a lot of new potential on this team. Many of our heavyweight and lightweight rowers set personal records and collectively earned a boatload of medals,” said men’s varsity captain and sophomore Justin Perry. “Our team wrecked the competition, winning first place in men’s and women’s lightweight varsity, open weight varsity women’s, and novice men’s categories.”

Concluding the day’s events with several notable wins, Carnegie Mellon varsity led the lightweight events, with first- and second-place finishes from seniors Danielle Millett and Natalie Weir in the women’s division, and Perry and men’s novice captain and sophomore Jonah Coste in the men’s.

With finishes only 0.7 seconds apart, the tight race between Perry and Coste proved to be memorable as the two Tartans competed for the top spot: “Jonah and I were neck and neck the whole way. He really made me work for it, and we both set personal records by pushing off each other,” Perry said.

Juniors Megan Larcom and Alyssa Fogel also went one-two to dominate the open women’s event. Carnegie Mellon did not have an open men’s team compete in the event.

Coste commented on the weekend’s success: “I’m pleased with our performance as a team, especially with the novice men — it gives meaning to all the effort we put in and keeps us motivated to work harder.”

The crew team will spend spring break in training for the Murphy Cup in Philadelphia on March 28.