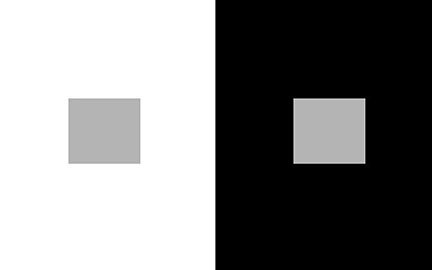 The top figure shows the Kanizsa’s triangle, while the bottom one is an image depicting the lateral inhibition illusion. 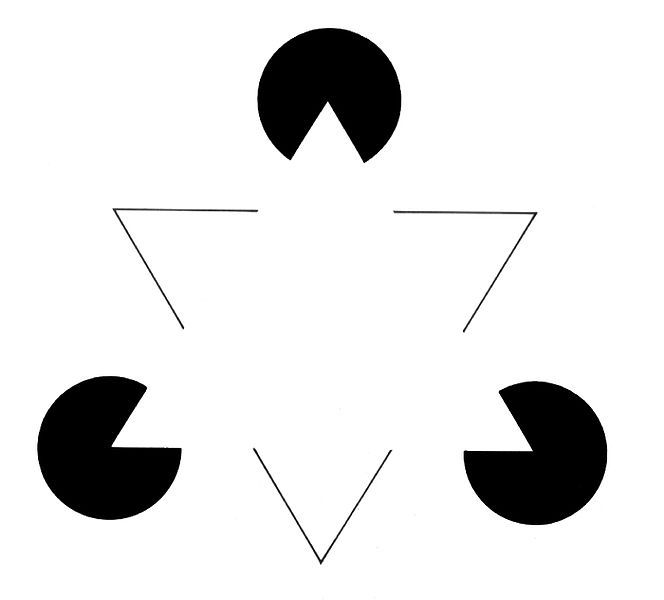 The top figure shows the Kanizsa’s triangle, while the bottom one is an image depicting the lateral inhibition illusion. (credit: Courtesy of (wikipedia.org)[http://www.wikipedia.org])

The mind is a powerful tool, especially when it comes to vision and perception. However, no matter how incredible the visual system is, it is bound to make some mistakes. These mistakes often take place in the form of optical illusions.

There are several types of optical illusions, including physiological illusions (effects on the eye or brain due to excessive stimulation of brightness, movement, or color) and cognitive illusions (the brain uses unconscious inferences or rules to help resolve ambiguities in the world).
One of the most renowned physiological illusions is the lateral inhibition illusion. This type of illusion is best illustrated by two gray colored squares, one surrounded by a white square (square 1) and one by a black square (square 2).

This is because the signals from the edge of square 1 show decreasing light intensity as the eye moves inward from the white into the gray square.

In cognitive illusions, the brain perceives images to be different from what they really are. Sometimes such illusions occur when the brain is trying to fill in the blanks in the visual field, as it does not like to have empty holes in vision.

This is especially seen in Kanizsa’s triangle illusion, where there is a white space surrounded by three circles that have the edges of a triangle cut into them. Between the circles lie the corners of an equilateral triangle. Because the brain doesn’t like having the void in this image, it automatically fills in the white space with the image of a triangle. Hence, the viewer perceives the image as consisting of two triangles, instead of just one, broken triangle.

One of the most prominent pieces of evidence that the brain loves to fill in the holes in the visual world comes from the existence of a blind spot in the eye. The blind spot in the eye is the area on the retina where there are no photoreceptors — the cells that detect light and transform it into electrochemical information.
At the blind spot, the optic nerve, which sends the information from the retina to the brain, connects with the retina, resulting in a lack of photoreceptors at this spot. A lack of photoreceptors means a lack of vision, but people do not live their lives seeing a blank spot out in the visual world.

The brain is very good at using surrounding information to fill in images for the blind spot where there is no vision, hence one always sees a uniform, detailed world.

The presence of the blind spot can be proved by using a few simple tricks. The most common of these is to draw two dots on a piece of paper about two inches apart. On closing one eye and focusing the other on one of the dots, the other dot will appear to disppear at some point when the paper is moved backward and forward.

Other optical illusions play with the monocular cues — cues given by one eye — of depth perception in an image. For example, when looking at a picture of a robot in a hallway, the robot looks normal sized toward the back of the picture (and hallway). The same robot, however, looks very small when placed in the front of the hallway. The two pictures of the robots are actually the same size.

Since people perceive the end of hallways as being smaller and farther away, the robot looks normal sized there. When the same-sized robot was placed in the front of the hallway, which is perceived as closer and larger by the viewer, the robot looks much smaller than its counterpart in the back. Similarly, if a very small image of the robot is placed at the back of the hallway and a normal- sized image is placed at the front, both the images appear to be of the same size. This illusion also occurs because of the same principle. The image at the end of the hallway appears larger than it actually is because the ends of hallways are perceived to be smaller than the fron of hallways.

Another type of optical illusion is called a 3-D stereogram, which creates the illusion of depth from a two-dimensional image. One of the most common types of stereograms is the autostereogram, which hides a 3-D scene in a picture that seems like a jumbled mess of repeating figures or dots. However, this optical illusion of depth is only seen when using the proper techniques, called diverging (wall-eyed) or converging (cross-eyed).
In order to see the 3-D picture hidden behind the image, the eyes have to view the picture at angles different from normal. In wall-eyed viewing, each eye has to move slightly away from the central body axis, and in cross-eyed viewing, each moves toward the central axis. Since the eyes do not normally orient in this way, this causes the brain to believe that a second image lies behind the one being viewed. Because of the different angles of the eyes relative to each other, people are able to see images ranging from sharks to snowmen, depending on the type of autostereogram.