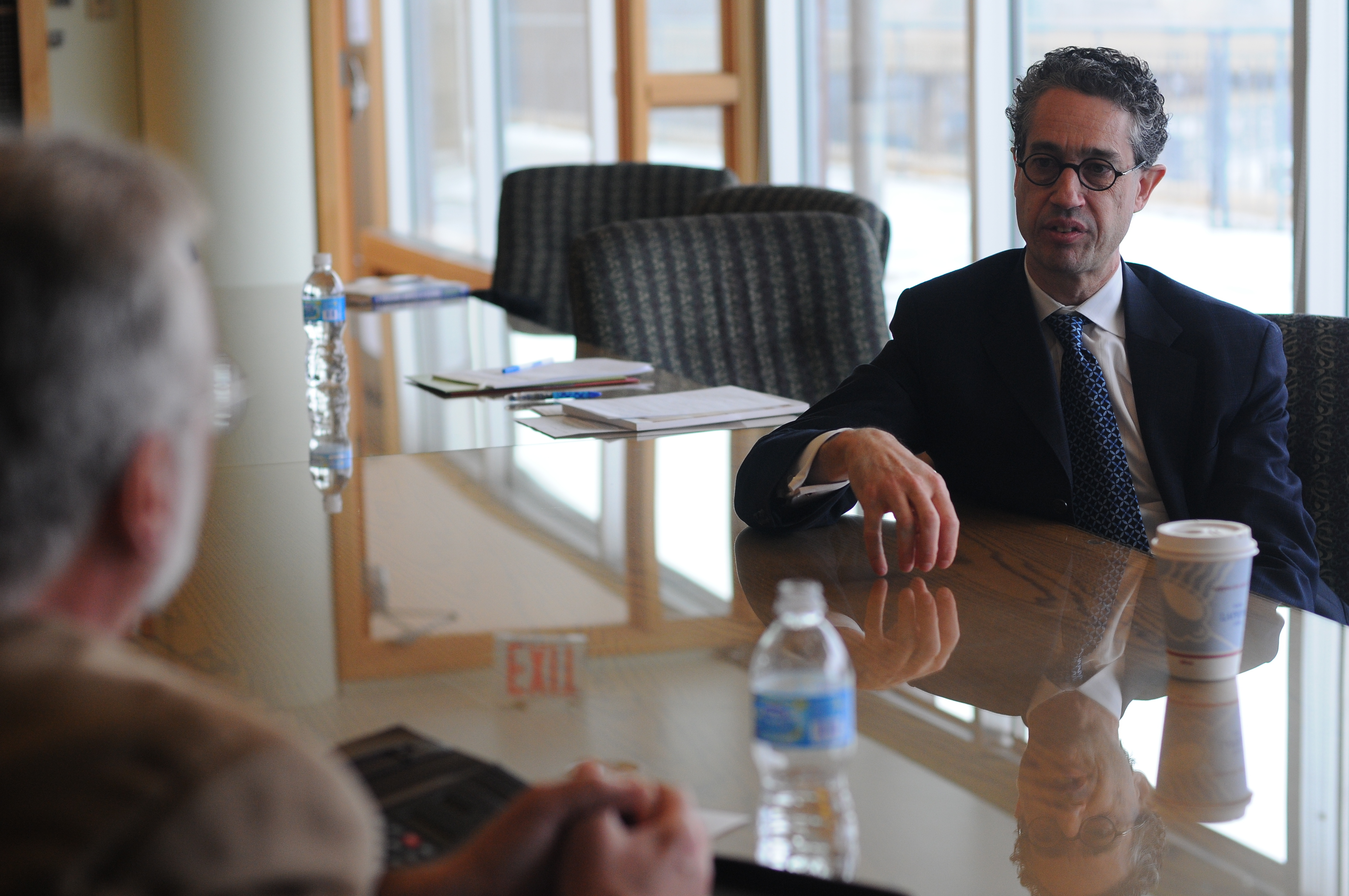 Peter Tertzakian, an energy economist, discussed how to use energy more efficiently in a lecture last Wedenesday. (credit: J.W. Ramp/Publisher)

Energy economist Peter Tertzakian gave the keynote speech for “Focus the Nation,” a three-day conference aiming to increase public awareness of global climate change and to discuss solutions at the individual and societal levels.

By Tertzakian’s ken, the first step in managing energy usage is to get a grasp of how much of which fuels are being used to light, heat, and move everyone, what he calls the energy mix. A Thousand Barrels a Second, the title of his book published in 2006, is by his estimation the rate at which the world consumes crude oil. Tertzakian’s thesis: the transparent access to cheap, clean energy, what he calls the American “energy birthright,” is eroding. We cannot maintain both it and our current levels of consumption.

Tertzakian cited the rising, volatile crude oil prices as evidence that the market is struggling to satisfy consumers, who require vast amounts of oil, and oil suppliers, for whom it is becoming increasingly difficult and expensive to find light sweet crude oil, the most desirable grade of oil and the cornerstone of our access to cheap and relatively clean energy.

Why is this a problem if there are already so many large oil wells? When a well is first drilled, it produces at full capacity. As time passes, the well produces less and less — if in 10 years, the well is producing at half capacity, then in another 10 years, it will be producing at one quarter capacity. “Maturation,” as it is called, means that in order to maintain production levels, new oil wells need to be found.

The fleet of vehicles on the roads depends on gasoline and diesel, and the roads themselves are made of asphalt, another oil product. The internal combustion of the engine is inefficient. After the conversion from chemical to mechanical energy, including losses to friction and heat in the engine proper and in the drivetrain, the total amount of energy powering the wheels is less than 20 percent of the energy that the fuels could provide.

The oil shocks of the late 1970s drove innovations in automobiles, such as the use of plastics and fuel injection technology. But with time, people eroded into their gains by moving out to suburbia, making their commutes longer, and by developing a mania for larger, heavier vehicles. Economists call this “the rebound effect,” when people start eating into their savings.

Tertzakian believes that it is not too late to benefit from the savings that engineers have wrung from various products. He gave the example of the incandescent light bulb — a filament held in vacuum, which emits light when current is passed through. Any incandescent operates at around 2 percent efficiency with respect to the electrical power coming in on the line. This represents a great waste, but on the other hand, this is an opportunity for energy savings.

The simplest solution to this is to turn off the lights. For every unit of energy that one does not use for illumination, one saves 50 units of source energy. Tertzakian called this “the potential for impact on the total energy need.” Hence, by being savvy consumers, people can collectively lessen the amount of fossil fuel that needs to be found, drilled, transported, and refined — using the leverage that is available to them. “The real frontline in the battle for reducing energy dependency ... is with the individual member of society,” Tertzakian says in his book. The idea then, is not to generate more energy. It’s about how not to use energy. But using less energy means that people are less mobile, a little warmer in the summer, and a little colder in the winter. The question that arises is whether anyone would want to scale back their standard of living.

Tertzakian believes “there are two things that speak louder to people than their wallets: a cry to rally around the flag for the good of the nation and social peer pressure.” He also said, “If we don’t make those [energy] choices consciously, other choices will be imposed on us by economics, government, or both.”

During the last world war, patriots on the home front planted victory gardens. There might soon be the need for a victory lights-out — Tertzakian noted that apart from the 1970s oil shocks, the only time that oil consumption has decreased was due to home front rationing during World War II.

Tertzakian believes that the magic bullets of the near future will be social technologies that change the way energy is used. Telepresence appeals to Tertzakian, because it allows face-to-face meetings between people sitting anywhere on the globe. In terms of energy, telepresence is a huge saver, mitigating the need for the standard American hour-long commute or the transatlantic business trip. Tertzakian summarized where we are in the United States today.

Although oil prices have slowly dropped from their $100-a-barrel spot price that was experienced in the summer, prices remain historically high and volatile. He stressed that “how nations respond to the coming break point will necessarily go beyond the forces of mere markets and businessmen.” We must as individuals come to terms with the realities of a post-energy birthright world.