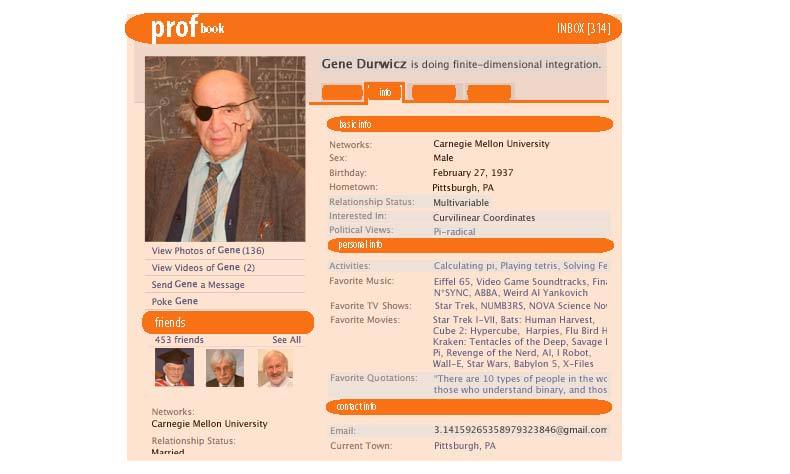 Facebook is one of the largest social networking sites in the world, and there are over 20,000 users on the Carnegie Mellon Facebook network.

A few more than 300 of these users are faculty, excluding the accounts of faculty formerly associated with the school, and fake faculty accounts set up by students as jokes.

Furthermore, despite all the unknown acquaintances that usually dot the typical user’s list of friends, very few undergraduates at Carnegie Mellon are friends on Facebook with their professors.

For many college students, this separation is an essential part of Facebook’s appeal.

“For many, it would feel uncomfortable to know that your professor could see everything you had written on your page, especially if that professor is going to grade you at the end of the semester.”

Professors face similar, if not significantly greater, risks as their students on Facebook.

On her profile, professor Reiko Ohnuma at Dartmouth College admitted she had consulted the online encyclopedia Wikipedia to prepare for her lecture the next day.

She wrote, “Do you think Dartmouth parents would be upset about paying $40,000 a year for their children to go here if they knew that certain professors were looking up stuff on Wikipedia and asking for advice from their Facebook friends on the night before the lecture?”

Ohnuma also criticized her colleagues, writing on her profile, “some day, when I am chair [of a department meeting], we’re all going to JOG IN PLACE throughout the meeting. This should knock out at least half of the faculty within 10 minutes ... & then the meeting can be ended in a timely manner.”

The tenured associate professor of religion thought that only the people she had specifically added to her list of friends could read her comments, but in fact everyone in Dartmouth College had access to her profile.

Ohnuma described the experience as “highly embarrassing,” and she has urged her peers to check the privacy settings on their accounts and be careful about what they say online.

The division and tension between students and professors on Facebook seems to ease after graduation.

On Ohnuma, Friedman also added, “It is funny that those students criticize someone for using Wikipedia or working late.... They probably study that way all the time.”