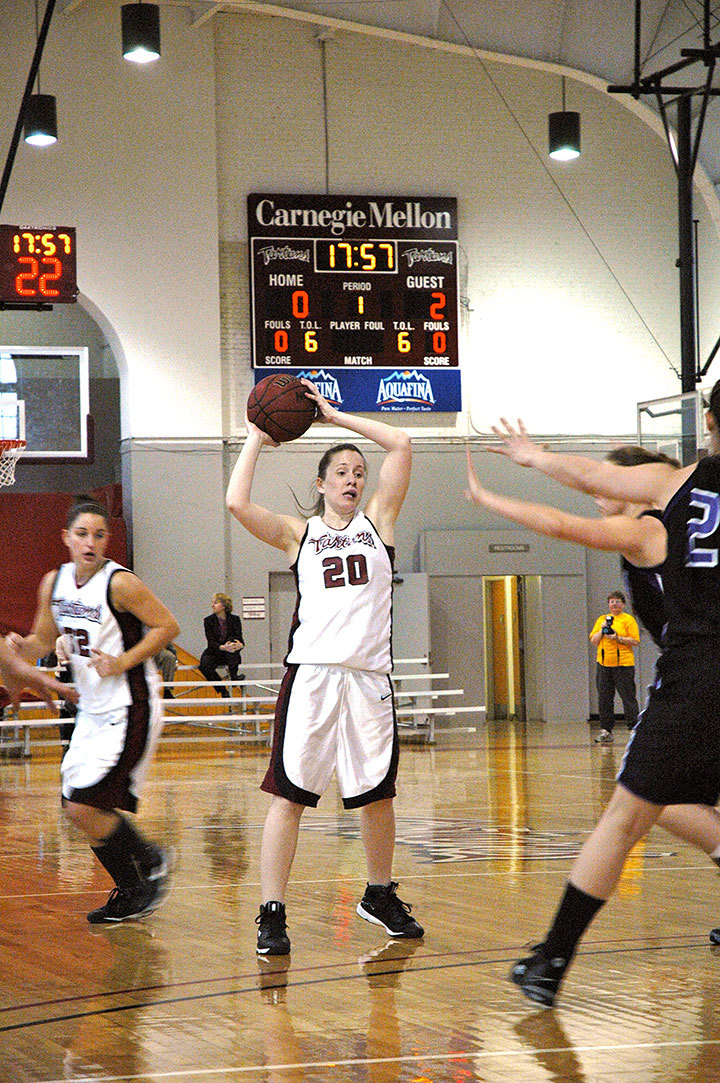 After a University Athletic Association (UAA) conference doubleheader on the road, the Carnegie Mellon women’s basketball team dropped two decisions to their hosts, falling 78–58 to the 12th-nationally ranked Washington University in St. Louis Bears on Friday and 76–48 to the University of Chicago Maroons on Sunday. The team’s record now stands at 5-19 overall and 0–13 in conference play.

Two weeks ago, the team hosted the Judges of Brandeis University in front of a crowd of 225 in support of the Women’s Basketball Coaches Association (WBCA) Pink Zone event on Friday and played the Violets of New York University on Sunday in Skibo Gymnasium, but fell to the visitors 71–49 and 62–54, respectively. Carnegie Mellon battled the Judges in the first half, with two leads and three ties, and entered the break trailing behind Brandies 27–36. Brandeis picked up momentum to extend their lead on an 18–5 run, maintaining their double-digit lead to seal their 71–49 victory.

Despite the loss from two nights before, the Tartans rallied against the Violets on senior day with a 12–0 run in the first half, opened up by first-year Ali Aunkst and her back-to-back three-pointers and closed out by a fast-break lay-in from senior Colleen Light. The Tartans finished the half with a four-point lead. NYU came out of the lockers ready to play and edged the Tartans 39–34 after a 9–2 run. Carnegie Mellon was unable to surpass the Violets and trailed behind to close out the game with an eight-point deficit.

Last Friday in St. Louis, the first half proved to be a constant back and forth struggle between the Tartans and Washington University, as there were five lead changes and six ties. As the leading scorer in the half contributing nine points to the Tartans score, Cortese opened up the scoring with a layup in the initial seconds. However, Carnegie Mellon was unable to gain momentum, and the Bears surpassed the Tartans to maintain an edge of five points. It was not until the 10th minute that the Tartans equalized at 15–15 to convert a five-point deficit into a four-point advantage. Senior Stacie Aleski sank a three-pointer to jump start the Carnegie Mellon 11–2 run that contributed to the 21–17 lead. Once again though, the Bears came from behind to close out the half with a five point advantage at 33–28.

Wash. U. came out of the locker room ready to dominate the second half, extending their advantage to 50–33 with 15:15 remaining. Carnegie Mellon could not rally enough to close the 17 point margin as Wash. U. continued to widen the gap, putting away a total of 45 points in the second half, with a 20 point lead to finalize the victory.

Yesterday’s game against the Maroons proved to be a disappointment for the Tartans and they headed back to Pittsburgh with another loss to their conference record. Carnegie Mellon struggled to sink any of its first 12 shots, but senior Corey Innes broke the dry spell with a three-pointer that unfortunately led to a nine-point run for Chicago. The Maroons continued to dominate the court as they expanded their lead to 39–17 before the break. As the teams entered the second half, the Tartans gave a better fight but the Maroons maintained possession and confirmed their 28-point edge over Carnegie Mellon to finalize the score at 76–48.

The Tartans conclude their season this Saturday when they hit the road to take on the University of Rochester. Game time is set for 2 p.m.