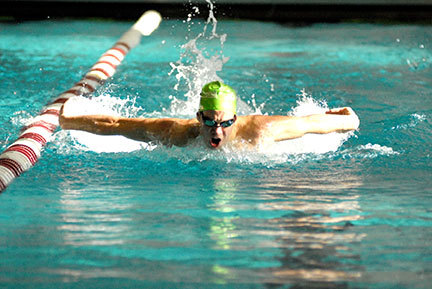 The journey to Chicago for the University Athletic Association (UAA) Championships was a chance for the Carnegie Mellon swimming and diving teams to showcase their hard work and talent among some of the best competition in the country. Both the men and women returned to Pittsburgh with top-three team finishes and many individuals sporting medals. The men finished second out of eight with a score of 1533.5, 161 away from champion Emory University. The women finished third out of eight with a final score of 1060, placing just behind Emory and New York University. Many of the Carnegie Mellon swimmers recorded provisional NCAA qualifying times and will most likely make the trip to the national tournament this year, which will be held March 18–21 at the University of Minnesota.

Junior Matt Kuhn captured his second diving title off the 1-meter board. Kuhn was also honored as the men’s diver of the year by the UAA. First-year Mike Alexovich also placed off the 1-meter board, finishing third in the conference. Junior Jeff Dahlen captured first place in both the 100-yard and 200-yard backstroke and was also a member of the third-place 400-yard medley relay team and second-place 800-yard medley relay team.

Teammate junior Jonas Altman-Kurosaki finished just behind McConnell in the 1650-yard freestyle by .71 seconds to claim second place overall. Junior Andrew Seo finished second in the 200-yard breaststroke with a school record time of 2:04.26. Claiming some more points for the Tartans was senior Ron Papa, who finished third behind Dahlen in the 200-yard backstroke.

Sophomore Molly Evans had four victories at the meet, placing in every event in which she competed. Evans had two individual second-place finishes in both the 200-yard backstroke (2:04.33) and the 200-yard freestyle (1:52.42), both of which were NCAA “A” qualifying times. She also recorded third in the 200-yard individual medley relay with a time of 2:07.92 and third in the 800-yard freestyle relay along with teammates junior Sara Andrews, first-year Victoria Adams, and senior Allison Retotar with a time of 7:38.78.