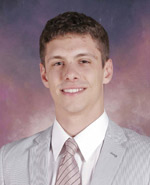 As one of the six graduating Carnegie Mellon men’s basketball seniors, Elliott Curtis has been a significant part of one of the most successful squads in the program’s history. When Curtis isn’t dishing out assists for the Tartans, he stays busy with academics, as well as with teaching a stylish StuCo course called “Sneakerology” and working with his shoe and clothing line, vitaminTHICK. With hopes of postseason play in the near future, Curtis reflects on his basketball career and entrepreneurial endeavors with The Tartan.

The Tartan: Since this is your last basketball season, has there been any season in particular that meant a lot to you?
Curtis: Honestly, my seventh and eighth grade seasons for the Pierce School back in Brookline were probably my best. I was a star. When I got to high school, I was unwillingly transformed into a role player. Oh... you mean in college? This season has been the most meaningful by far.

T: If you could have had one part of growing up in the Boston area moved here, what would it be and why?
C: First off, and I think anybody reading this from the Boston area would agree with me, I definitely miss Anna’s Taqueria burritos. I rarely eat Qdoba and Chipotle because they are so greatly inferior to Anna’s. I would like to say, however, that Pittsburgh is an awesome city in terms of food. Wherever I end up next year, I will surely miss Fat Heads and Primanti’s. Other than that, the lack of Boston sports coverage is excruciating. Good thing all four major teams are amongst their respective leagues’ elites, so they get a fair amount of national coverage.

T: Your StuCo course, Sneakerology, has been getting some great press and has become popular. How would you hope to expand this class in the future if you had the chance?
C: Teaching Sneakerology with my buddy Jesse [Chorng] has been an awesome experience. In the future, I would hope to offer the course at a university close to wherever I end up next year. That way, I might even get paid for teaching the class! But it’s not about the money.

T: Do you have an all-time favorite shoe?
C: Definitely the Air Penny II in white and Atlantic blue. Penny Hardaway was my favorite player as a youngster, so I wore his number and bought his sneakers to wear while playing for my first basketball team in fourth grade. I just bought a retro version of the shoes in Carnegie Mellon colors, which I wore on senior day. It was my metaphorical sneaker statement of my playing career coming full circle, whatever that means.

T: Are there any recent or future developments for your shoe and clothing line?
C: vitaminTHICK is coming along. I just got back from the MAGIC [not related to “The Gathering”] tradeshow in Las Vegas, which is one of the largest premium and urban fashion conventions in the world. It was a great learning experience and gave us some valuable insight into the future of the company. We have a great product selection for this spring, and there will for sure be some shirts available at Kicksburgh April 15 in Skibo Gym.

T: Where would you like to live after graduation to pursue a career or graduate school?
C: Right now my plans are completely up in the air. If you haven’t heard, the economy is down from years past, so finding a job might take a little longer than planned. I would be fine with living on a trundle bed in Ry-Dude’s [Ryan Einwag] apartment in Chicago — Terrance [Bouldin-Johnson] already shottied the couch — or maybe on a hammock outside of Greg Gonzalez’s beach-front property in Puerto Rico.

T: How is your experience with the new podcast feature aired by our sports information department?
C: Recording “Two the Point” with Corey [O’Rourke] has been a lot of fun. Our listeners span from our moms to, well, our dads. But if anyone reading this is interested, check out the Athletics website for our weekly episodes of entertainment. I must say though, my back is getting a little tired from carrying the show.

The Tartans will be finishing out their regular season play this Saturday at the University of Rochester.