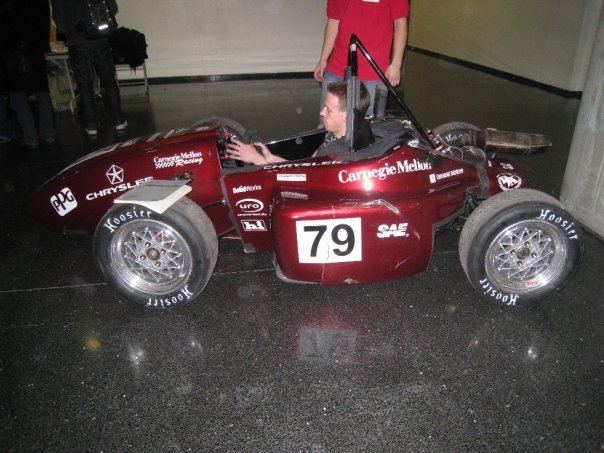 The Carnegie Institute of Technology (CIT) is known for working its students hard, but this year’s first annual technology showcase, which displayed 12 student engineering projects, showed that all those sleepless nights of coding, soldering, and nervous breakdowns were well worth the effort.

The Tech Showcase was part of the annual National Engineer’s Week, which was hosted by the Society of Women Engineers (SWE). The showcase was a new addition to this year’s E-Week events. “The Tech Showcase aims to celebrate the exciting and innovative research and technologies being developed by engineers,” Christine Ho, a senior chemical and biomedical engineering major and co-chair for E-Week, said. “It is an opportunity for students in CIT as well as students in the other colleges to explore the many ways in which engineering is changing the world.” The showcase represented projects from all different disciplines and organizations within Carnegie Mellon.

The three senior capstone projects that were displayed included a gesture recognition glove called “Hand Talk,” a fold-out toaster, and an iPod-charging exercise bike. “Hand Talk” is a project developed by electrical and computer engineering alumnus Bhargav Bhat and fifth-year electrical and computer engineering master’s students Hemant Sikaria and Jorge Meza. The device is aimed to help individuals who have hearing impairments to better communicate with other people. By wearing a glove with embedded sensors, an individual is able to make a gesture that is then transmitted to a cell phone as text.
“The cool thing about our project is that there are a lot [of] these types of gloves out there, but ours is the only one which is wireless,” Meza said. The technology behind the glove is currently being researched in regard to obtaining a patent. “Hand Talk” won the “Most Innovative Design” award at the showcase.

The fold-out toaster, developed by senior mechanical engineering students Akshay Jayaram, Leigh Fortenberry, Ian Price, and Jonathan Goetteler, is a modification of the current toaster design.
After conducting user studies, the group found that people often have trouble removing their toast from the toaster, causing them to burn their toast, themselves, or both. In order to solve this problem, they designed a toaster in which the side walls open up and out. “We think that this is a very innovative design, and we haven’t seen anything like this in the market,” Jayaram said, “so in the future, we’re hoping to get a patent for it.”

The iPod-charging exercise bike, which was developed by senior mechanical engineers Shobit Tandon, Abe Alexander, Cason Male, and Madhu Bhagavatula, is another example of technological innovation. The design involves attaching a generator to the wheel of an exercise bike which then charges the battery of an iPod. The project won the award for best overall design at the mechanical engineering showcase in the fall semester.

Several student organizations were also represented during the showcase. The Robotics Club’s “Robot Colony Project” aims to replace one large, expensive robot, which can accomplish only one task at a time, with many smaller, cheaper robots. The robots use infrared range finders to avoid collision with walls and other robots. With the help of the range finders and encoders, the club, currently funded by a Small Undergraduate Research Grant (SURG), is trying to develop cooperative mapping behavior to enable the robot to determine its position and environment. The robot will then be able to send the information back to a central server that can then use the data to create a map of the environment. Christopher Mar, a junior majoring in electrical and computer engineering, explained, “We’re programming each robot with a very simple behavior —to avoid walls and other robots—but when you throw them all together, hopefully something bigger arises.” The Robotics Club won the “People’s Choice Award” at the showcase.

Fringe Buggy, Society of Automotive Engineers (SAE) Racing, and Kiltie Kar were three other student organizations that participated in the showcase.
These three clubs all focus on creating dynamic projects that are entered into annual racing competitions. Each group has performed exceptionally well in each of its respective competitions.
Fringe has won the annual buggy design competition for the past 10 years, while Kiltie Kar placed second at last year’s national American Institute of Chemical Engineers (AIChE) chemical car competition. SAE Racing, which attends one annual competition in Detroit, placed 53rd last year in the overall competition out of 110 competitors, and also placed 23rd out of 110 in the endurance race.

TechBridgeWorld, a Carnegie Mellon program that seeks to improve literacy among visually-impaired youth, presented the “Braille Writing Tutor” during the showcase. The Braille Tutor uses a digital stylus that interfaces to a computer, PDA, or SimPuter interface. This allows the utilization of text-to-speech software that can provide immediate feedback to the students to help them correct their mistakes while they are learning. After perfecting the use of the digital stylus, the students can then move on to learning how to use the slate and stylus. The system has been tested in India and Tanzania, and will soon be tested in China and the United States. The Braille Tutor won the “Impact Award” at the showcase.

The game involves players identifying themselves as either left-brained or right-brained, and then, based on this identification, they can compete in games with other players standing in line. The group, which consists of about nine members, is planning to spin the project off as their own company.