The evolution of fashion 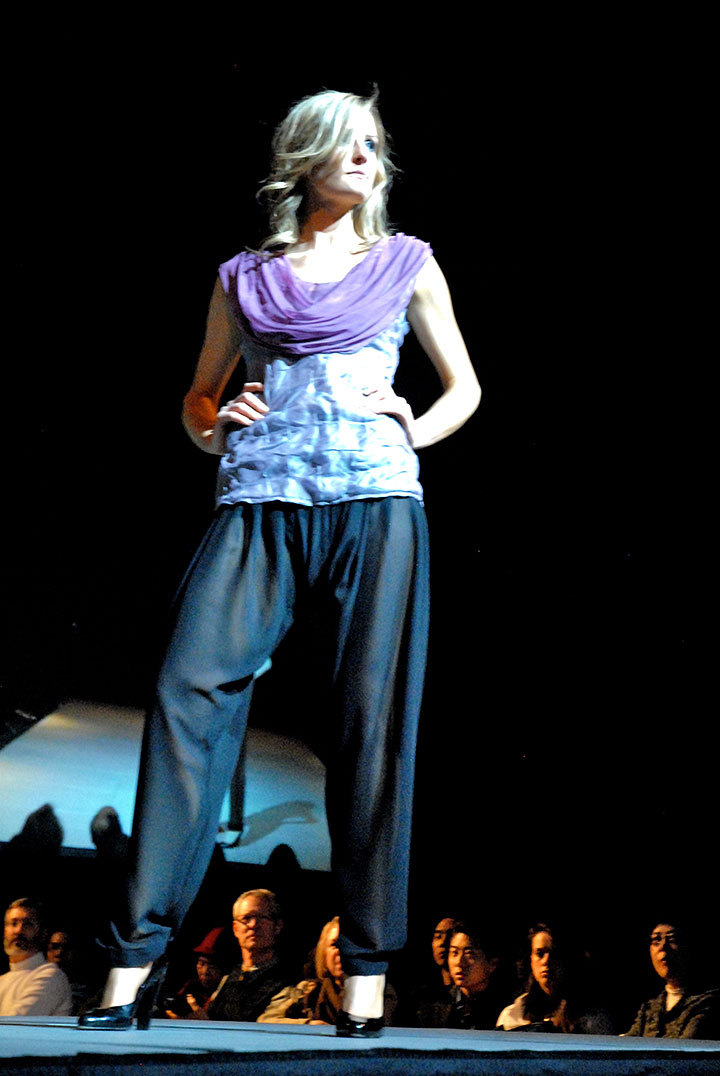 One of the models at the show works the runway. (credit: Aayush Kumar | Photo Staff)

The Feb. 14–15 weekend was a fashion-filled one as it witnessed both the SPIRIT “Glamour Aftermath” and Lunar Gala Evolve fashion shows. On Saturday night, students crammed into the Wiegand Gymnasium to witness the annual Lunar Gala show.

The show was originally inspired as a celebration of the Chinese New Year. The beginning of the show featured a live lion dance performance, a traditional form of Chinese dance that involves people imitating a lion’s movements from underneath an elaborate costume.

Next, models began to work the runway, dressed in clothing designed by students or showcasing the styles of local vendors. Lunar Gala gives student designers a chance to express their own creativity through fashion, with the models being their canvas. Some scenes in the show were designed by students but featured clothes from a retail store, such as 412 or Decades.

“We had designers pinning outfits on us [models] and custom fitting the clothing to our bodies. What really struck me was that we are wearing clothes that students designed, so I was representing the vision of someone right in front of me,” said Brieanna Nesbit, a first-year business major who walked as a model for the show.

The overall theme of the show, Evolve, was featured throughout every scene of the night. Some scenes in the Lunar Gala show were very abstract and conceptual, such as one scene following the evolution of flour.

“I really liked the focus on the clothes and design [in the Lunar Gala show],” said Nesbit. “The ‘Flour’ scene was really cute! I liked how each model came out and showed the transition from flour to baking and one girl looked like a cupcake,” said Nesbit.

Sara Berhie, a sophomore economics major, really enjoyed designing her line, “Pretend,” for the fashion show with Julian Imbrescia, a sophomore drama and self-defined H&SS major. “Julian already had experience in making clothes, so we thought it would be fun to design a line for Lunar Gala,” said Berhie.

The designers of “Pretend” were inspired by fairy tales and “the childhood stories we all hear. We wanted to show the evolution of this abstract idea of a fairy,” said Berhie.

The show had similar themes to the SPIRIT fashion show the night before, but “the vibe is completely different,” said Nesbit. “SPIRIT is about being a fashion event, whereas Lunar Gala originated as a celebration of the New Year, and is a celebration of students’ creativity,” said Ian Coleman, a first-year global politics major.

The process of running the show was very stressful. Backstage, models and clothes filled the Connan Room as people ran back and forth from the dressing room to the stage. Coleman worked as a behind-the-scenes model coordinator for the show. “It was very hectic backstage, but we managed to pull off a great show,” said Coleman.

Yet, some people felt that this year’s show wasn’t as good as the year before. Samson Debela, a junior civil engineering major, commented that the show was missing “that ‘wow’ factor like last year when people were wearing metal clothes. I was excited to see the show and I thought it was pretty cool, but I wanted to be blown away.” Adrienne Wilson, a sophomore art major, felt differently. “The show was very extravagant as far as stretching the rules of fashion with the themes in each scene. I enjoyed it,” she said. The clothing ranged from casual outfits that people could actually wear on the street, such as simple pieces with an added flair of an oversized rose or feathers. Other pieces, such as a beaded top that looked like a necklace, may not be as appropriate for daily wear.

Many of the dresses featured in the show were thoughtfully detailed with special attention to fabric, color, and accessories, especially the “Feathers” scene. Beautiful ostrich feathers were used to adorn the belts, skirts, and backs of the models’ clothing.