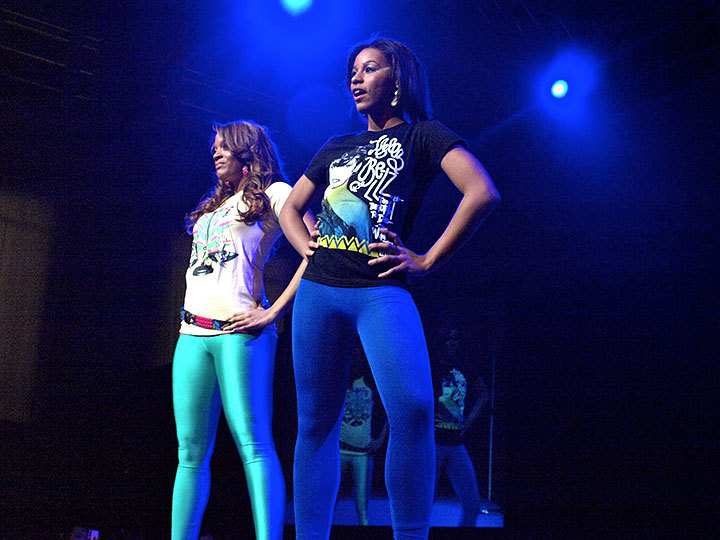 A still from the scene “Timebomb,” that depicted clothes from a store with the same name. (credit: Nicole Ifill | Photo Staff) 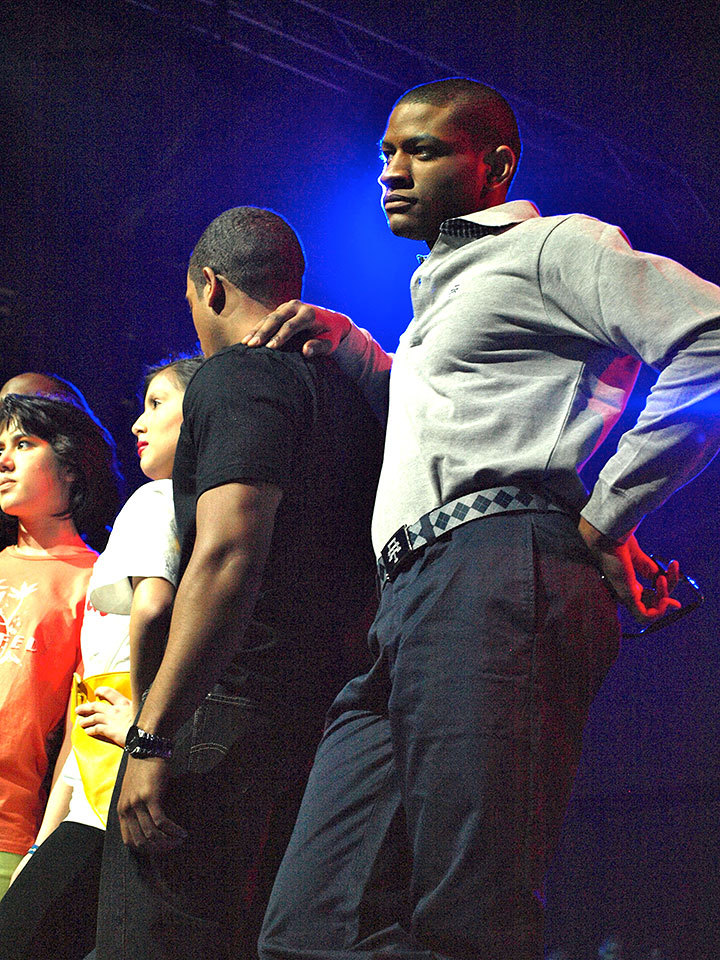 The SPIRIT fashion show, “Glamour Aftermath,” took place in Wiegand Gymnasium on Friday, Feb. 13. The show opened with an elderly woman reciting a story of creation behind a group of models, the girls in nude and black bandeau tops and skimpy boy shorts, and the boys in similar bottoms, were heaped on top of one another on stage. After the piece was over, the models awoke disoriented and confused, portraying the birth of mankind. Each model walked onto the stage wrapped in a boa with a stick, complete with tribal makeup, and all of them joined in a semblance of an African family at the end of the runway.

After this opening was the first scene, titled “Pink Lady.” The song playing in the background was “You Are My African Queen.” Traditional garb, both men’s and women’s wear, with colorful fabric and ornate headpieces were modeled. The next scene was entitled “Fig Leaf,” where the models walked out in pairs wearing modern, flirty dresses. The color scheme was black and pink with ultra feminine silhouettes, shiny fabrics, and stilettos.

The next scene, “Dee Hall,” was comprised of all female models dressed in black with accompanying bold accessories: hats in bright colors and vibrant chunky jewelry. Jonelle Saunders, a sophomore science and humanities scholar, and Princess Parker-Smith, a sophomore biomedical and material sciences engineering major, designed a line that was an alluring display of lirty bright clothing in stunning silhouettes.

The concept behind their line revolved around the recent Kanye West song “Heartless” from his 2008 album, 808s and Heartbreak, which played in the background during their scene. A model, Ian Coleman, a first-year in H&SS, stood in the center of the runway in black pants and shirt with gold and silver streamers attached to his torso. As each of the female models entered the runway, they ripped these strips off his shirt and flung them aside, leaving him stripped of the streamers at the end of the scene.

The next scenes that followed were full of high-energy songs, which seemed to dictate the mood of the models, who were projecting a fierce intensity and confidence that couldn’t have come from anywhere but the clothes. Common’s new single, “Universal Mind Control,” played during “412,” where bright colors were featured on male and female models in urban apparel and street wear. Similar outfits were sported during the “Decades” scene, where models showed off clothes from the local vintage shop that bears the same name.

The last scene before the intermission was especially enjoyable, featuring designs by “Ms. Dig,” (Allison Diggory) a University of Pittsburgh student who first debuted her line of hand-painted garments last year. This year she expanded past just shirts, dresses, and hoodies by introducing leggings, jeans, and tunics. There were 21 pieces, each with a large graphic symbol or emblazoned with a message like “Don’t Sleep on Me,” “Smooth Operator,” or “Maneater.” Her scene featured a live rap performance by Nick Pratt, a popular local artist and University of Pittsburgh student.

The entertainment factor went sky high after the first act ended. During the intermission, there was a competitive audience walk-off, and multiple dance breaks opened the second act. There was also a performance of a poem that began and ended with the lines, “I hate suga babies/May my flavor forever be sweet,” by one of the chairs of the show, Carnegie Mellon alumnus Rigardo Rush. It addressed the controversial issue of homosexuality in contemporary society.
For the lingerie scene, black lights illuminated the stage while male models in boxer briefs lined the perimeter of the runway, and Rush came out in similar fashion and poured paint on each of the models. The black light made this paint fluoresce a neon yellow, giving an eerie ambience to the whole scene. The houselights flooded the stage as the female models walked out in their lingerie: bustiers and negligees, babydolls and garter belts, silk and lace.

The house music during this scene was a song by Kat DeLuna, where in the lyrics she poses the question: “Are you wild and dirty like an animal? Can you growl and scream like an animal?” There were murmurs among the crowd that this show had become a little too risqué for their liking.

After the lingerie scene, there was one more dance break and then the final two scenes. “Charles Spiegel for Men” featured an all-male cast in full three- and two-pieced, double- and single-breasted suits with matching ties. The men looked debonair in their pinstripes and button up shirts.

Before the models strutted their stuff, a clip of Martin Luther King Jr.’s infamous “I have a dream” speech played mixed in with a clip of Barack Obama announcing his presidency. Some pretty patterned dresses that would be great for a date showed up in the final scene, and even some furs were spotted on some of the models, a surprising but refreshing feature.

On the whole, despite some technical hitches and wardrobe malfunctions, the show was exciting and colorful.