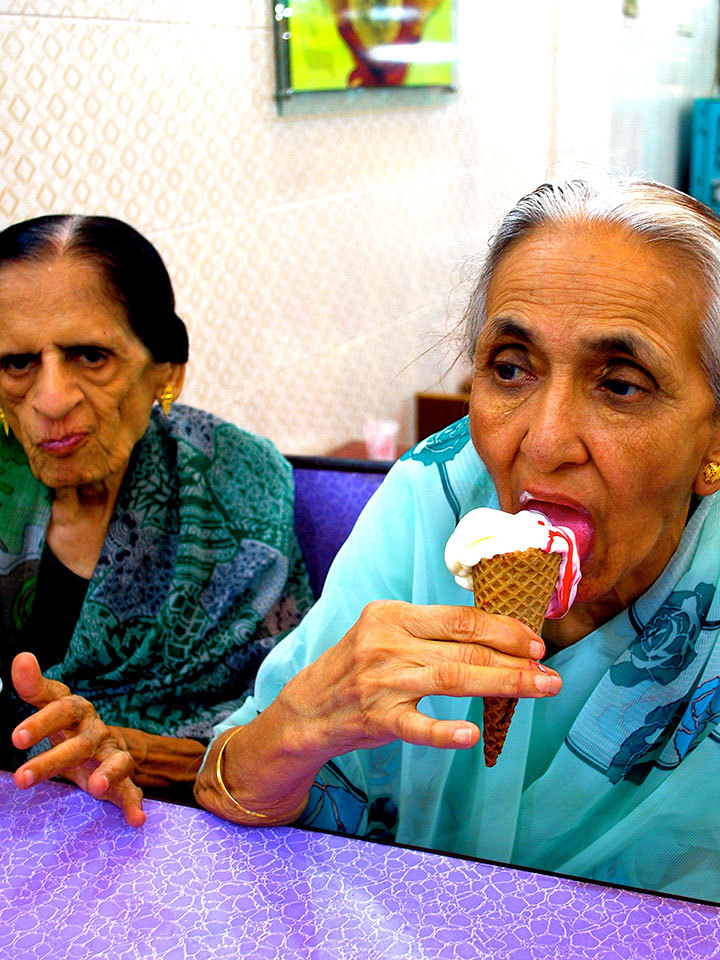 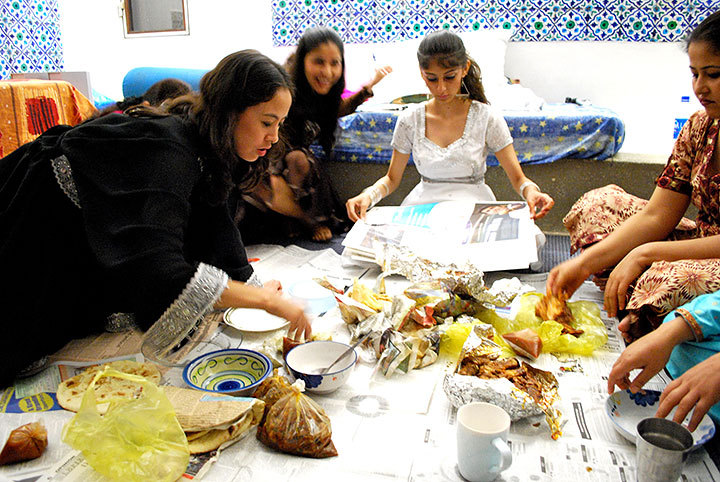 Some of Poonawala’s Pakistani friends give her a farewell dinner with a delicious spread of traditional cuisine. (credit: Courtesy of Alia Poonawala)

I subscribe to the thinking that, organically, all humans are fundamentally the same. We all need or desire the same things; we just go about getting them differently. But this happy little ideology of mine was heavily challenged this past summer. I hadn’t seen the impact of my summer abroad in Pakistan until I was in the U.S., two weeks after I had returned from Karachi. I was with friends in D.C., sandwiched in the languorous summer, to feel at ease and be young and act free. We went out at night where all the young and salacious go, but amid all of this, something didn’t feel quite right. My friend said I had been acting differently since I came back from Pakistan, because I was quieter and more serious. I guess I was overwhelmed by this nightlife I was encountering with them — so fundamentally different from the sable Karachi sky.

In Karachi, late at night — even on weekdays — families were out, being busy. Draped in luxurious fabric, the women of these families were guarded by crowds of male relatives and children. I’d admire the women’s long, dark hair and beautiful, delicate wrists. Sometimes I’d catch a clavicle and think, “Oh! How pretty!”

Most of these extended families were out so late in the lively streets to share conversations over a dinner that usually lasted two to three hours. One night, my aunts and uncles took me to a nihari shop, which serves a dish of thick gravy and tender meat, after the eight o’clock prayer. We sopped up the gingery stew with warm rounds of naan, a soft, white bread, as it was spun out of the clay kiln in which it was baked. It was hot, and we were in the “family” section of the restaurant, where the only things that were keeping us cool were the fans that were whirring rapidly. But they still weren’t enough to keep my back from growing moist with sweat, which dampened the print of my salwar kameez, a traditional dress worn by women in Pakistan that I happily sported. We ate with our hands, while I peered at the families, trying to decode their brown, sun-dried faces and deep, expressive eyes. Modest and loyal, the mothers sat proudly, while their children sat on their laps like baby birds, anticipating a hand of food in between the rushed conversation and the cramped tables.

Food became very important to me in Pakistan. It was through such pleasurable social experience that I was able to talk and listen to people whom I was unable to approach. At Aga Khan University (AKU), where I completed a neurology internship, I would enter the cafeteria, shy and alone, and sooner or later, a lonely girl would join me in my corner and I’d make a friend. These girls, once I got to know them, were all so impressive, so aggressive, and so independent. Some would just be finishing medical school at age 24, some were recently engaged to be married, while others were traveling to the U.S. to conduct research in collaboration with Pakistani universities.

In the women’s hostel at AKU, where I lived, all my friends were in their late 20s or early 30s but looked more youthful than I (some women even asked me how many children I had!). We spent most of our time talking and laughing in the air-conditioned common room. The heat was too unbearable everywhere else. They cooked for me and took care of me, and I reveled in their attention and nourishment. We gathered in the common room every evening after prayer and ate bhindi (okra) accompanied with warm bread and freshly prepared dahi (yogurt), both purchased from a man with a cart on the way to the mosque. The man had a crooked eye and tried to get me to pay more than was necessary, which I sometimes did. Occasionally, my friends Rehana and Ambreen would take me to the canteen, which sold crunchy delectable samosas, fried triangular snacks filled with potatoes and spices, and shammi kebabs, skewered mince meat with ground chickpeas, that were securely tucked into ghee-covered parathas, buttered flat bread. After that, we’d walk back with “choco-explosion” ice cream bars from the drugstore on the street corner. The owner of the store had been killed in a robbery and his brother had taken the business over. He had a sad smile and encouraged me to converse in Urdu with his children, who climbed up the shelves like monkeys to get products for customers.

With all that eating, you’d think the women would be “pleasantly plump.” But, in fact, almost all the women I saw were skinny and petite. Only Uranous, a beautiful Afghani student who was named after the planet Uranus, was “healthy,” as Pakistani women termed being chubby, like me. Uranous and I would go speed walking in fast circles below the turbid sky and sticky night, wearing our salwar kameezes, which I disliked having to wear for exercise. We’d talk about the man in her life and she’d teach me Urdu. Sweaty and tired, we’d come back to sit in the common room and watch Indian television shows at 10 p.m. over shared slices of cold mango and leftover kheer, cardamom-spiced rice pudding, from the cafeteria.

My parents were terrified of sending me to what Newsweek deemed “the most dangerous place on Earth,” but I’m grateful they finally let me visit Pakistan. It’s important to test yourself, because being so wrapped up in an unfamiliar country with your own sublime loneliness, you grow and employ facets of yourself that you never knew existed.

When I came back to the U.S., it wasn’t just the country that I was afraid of; it was all the attachments to my identity that I wanted to avoid. My alienation arose out of that night in D.C. My friends and I ended up spending it in an ice cream parlor. I was trying not to be negative, but the raspberry ripple I was eating was flat and gooey. I felt a lump in my throat. We didn’t even know what to say to each other. I had become so used to the Pakistani notion of mealtime — an intoxicating exchange of loud talking and bold flavor –– that this evening was just ending up as a big fat disappointment.