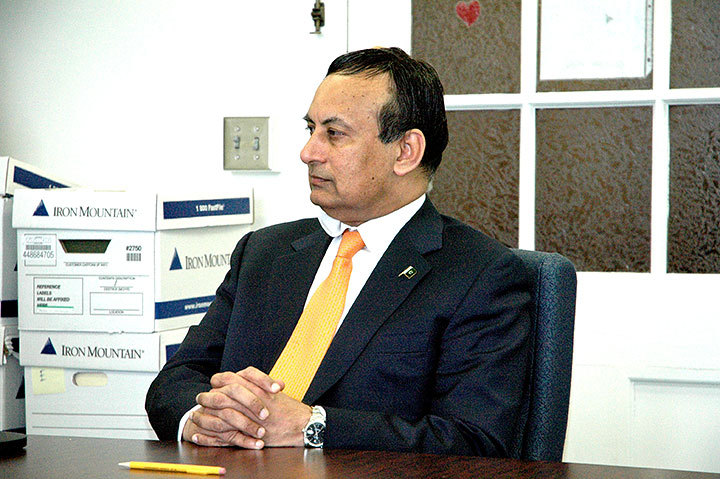 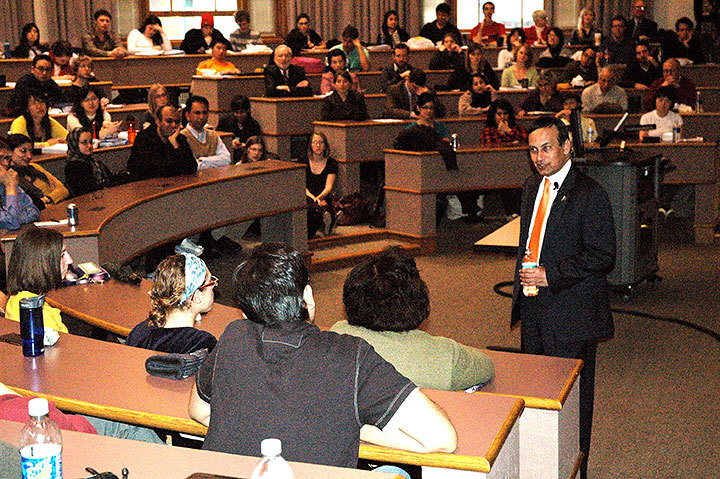 The ambassador spoke to students in the auditorium of Hamburg Hall. (credit: Cassie Wallace/Photo Staff)

Last week, Husain Haqqani, Pakistani ambassador to the United States, expressed his optimism regarding the democratic future of Pakistan and the strengthening of U.S.-Pakistan relations as he addressed a packed convocation co-sponsored by Heinz College and the Center for International Politics and Innovation.

The ambassador discussed how the political transitions in both Pakistan and U.S. administrations are likely to shape foreign policies adopted by both nations.

“The U.S. and Pakistan need to establish a strategic relationship based on a shared worldview, and President Obama and Vice President Biden understand that. They know what needs to be done,” said Haqqani.

Silvia Borzutzky, teaching professor of political science and international relations at Heinz College, stated in an e-mail, “Ambassador Haqqani’s discussion of the difficulties involved in Pakistan’s transition to democracy, as well as the expectations that Pakistan has of the new Obama administration, were particularly interesting.”

A former journalist and senior adviser to former prime minister Benazir Bhutto, Haqqani is currently a professor of international relations at Boston University and co-chair of the Hudson Institute’s Project on the Future of the Muslim World. Haqqani is also the author of Pakistan: Between Mosque and Military.

According to Haqqani, the United States has always viewed Pakistan as a “strategic real estate,” from which it can launch its own initiatives without paying much attention to the people of Pakistan.

Pakistan and the United States have been close allies in the war on terror since its launch in 2001. However, the growing Taliban insurgency and al Qaeda safe havens in northern Pakistan, and unauthorized U.S. air strikes in the tribal regions have often soured diplomatic relations between the two countries, Pakistan’s foreign minister Shah Mehmood Qureshi told CNN’s Stan Grant during an interview last week.

In an attempt to destroy alleged terrorist havens, the U.S. has launched 30 air strikes into northern Pakistan since last September, in which over 200 people were killed, as stated in The Guardian.

“We understand that there are components in Pakistan that have gone extreme, but we have to protect our civilians,” said Haqqani.

Haqqani emphasized the importance of the Kerry-Lugar initiative that promises Pakistan $1.5 billion annually in non-military aid. The aid will be allocated to critical areas like education, infrastructure, environmental efforts, women’s empowerment programs, and entrepreneurial projects.

The K-L initiative is an important building block of a partnership between the U.S. and Pakistan, rather than a short-term military alliance, said Haqqani.

“As the ambassador argued, Pakistan is faced with a large number of challenges and as a result the Obama administration will have to balance many contending interests,” stated Borzutzky.

“Future [U.S.] policies will have to be mindful of the need to preserve Pakistan’s sovereignty, the stability of Pakistan’s new democracy, the future role of the Pakistani military and the security services, and the U.S. strategic needs in the region,” she stated.

“As a Pakistani, I was proud of Ambassador Haqqani’s positive and motivated approach towards the welfare of our country and the rest of the world,” said Madiha Tariq, a master’s student in the Heinz Public Policy and Management program.

With regard to Pakistan’s pivotal role in the international community, Haqqani also stressed the fact that Pakistan is only six decades old and thus a relatively new country.

“The government needs time to learn. People who are living in Pakistan are going through more than a transition; they are going through transformation. We are in the process of rebuilding the institutions of state,” said Haqqani.

Under immense pressure from the United States and opposition parties in Pakistan, former president General Pervez Musharraf was forced to hold democratic elections after nine years of military rule.

“None of Pakistan’s governments have been as inclusive and democratic in the past,” said Haqqani, indicating that democracy in Pakistan may not be an illusion after all.

“It seems like Pakistan is rapidly moving towards democracy,” said Inyoung Song, a research associate at the Department of Social and Decision Sciences. “The ambassador did a great job in making sense of the situation in Pakistan,” she said.

Another major aspect of Pakistan’s transformation plan is the marginalizing of militants and integrating “those areas with pockets of terrorism” into mainstream society, said Haqqani.

On the situation in Swat Valley, now dominated by the Taliban, Haqqani pointed out that the media had summed up a complicated situation into attention-grabbing “sound bytes.”

Recently, the Pakistan government allowed the imposition of the Taliban’s strict interpretation of Shariah in Swat, which permits banning girls from school, women from venturing outside, and any form of entertainment.

“The government of Pakistan has not negotiated with the Taliban militants,” said Haqqani, but with the indigenous people of Swat who have long sought a system dictated by Shariah.

“Our purpose is to drive a wedge between the Taliban and the indigenous people,” said Haqqani.

The Pakistan government announced a permanent ceasefire between the Pakistan Army and the Swat Taliban on Saturday.

However, according Reuters news report, Taliban commander Maulana Fazlullah told an illegal FM radio, “We heard that the government announced a permanent ceasefire, but we have announced a 10-day ceasefire and we will consider an extension when it ends.”

“The distinction made here between the Swati Taliban and the indigenous group is an important issue,” said Tariq.
“If this is the real on-ground situation, then the Pakistani media must be allowed to enter the region and report it. Until we do not hear what the civilians of Swat have to say about this, we cannot be certain that this is the right move,” Tariq also said.

“India and Pakistan can work together in areas of education, energy, and cultural development,” said Haqqani.

Haqqani also said that despite the geopolitical odds faced by Pakistan, it has the capacity to turn them around for its own and others’ benefit.