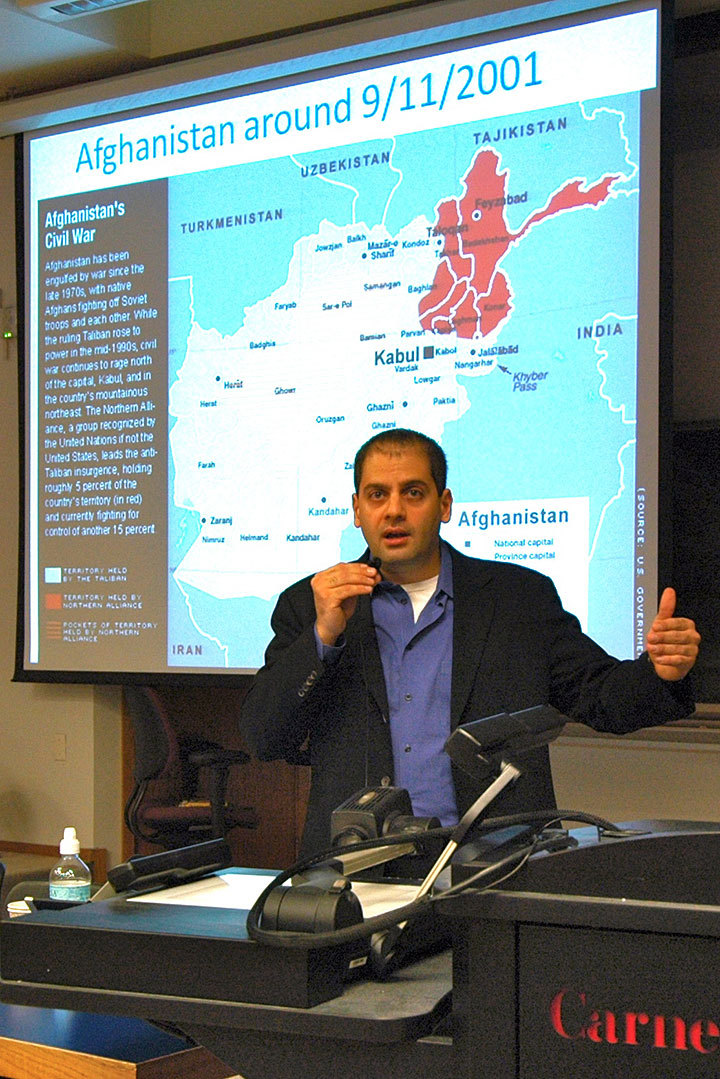 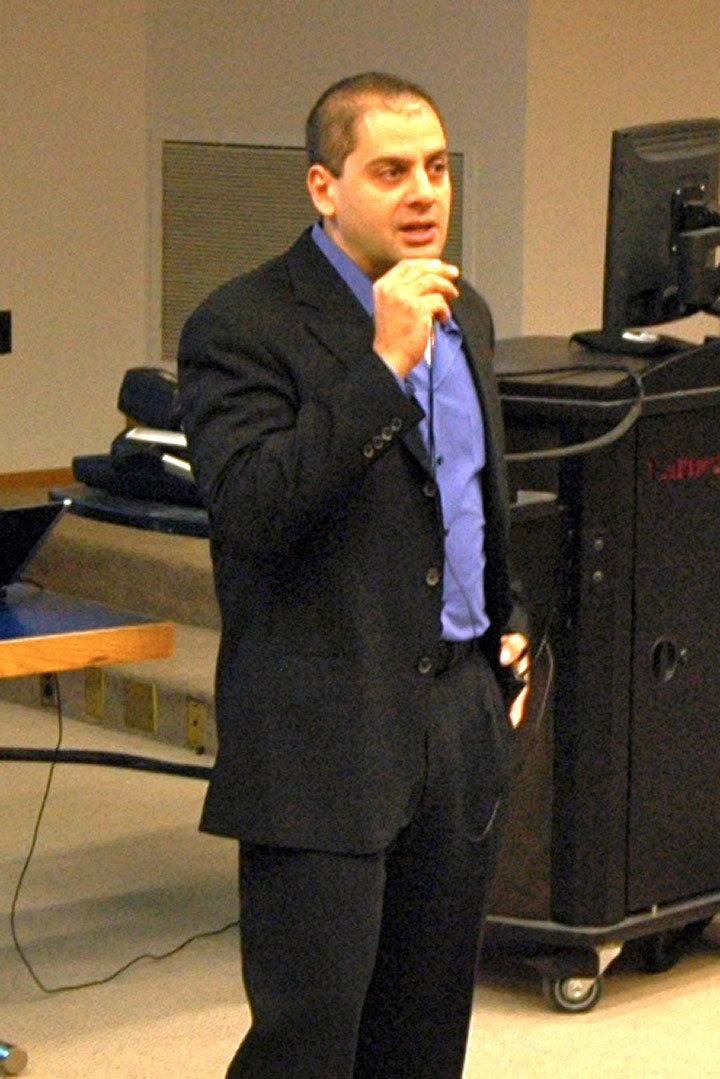 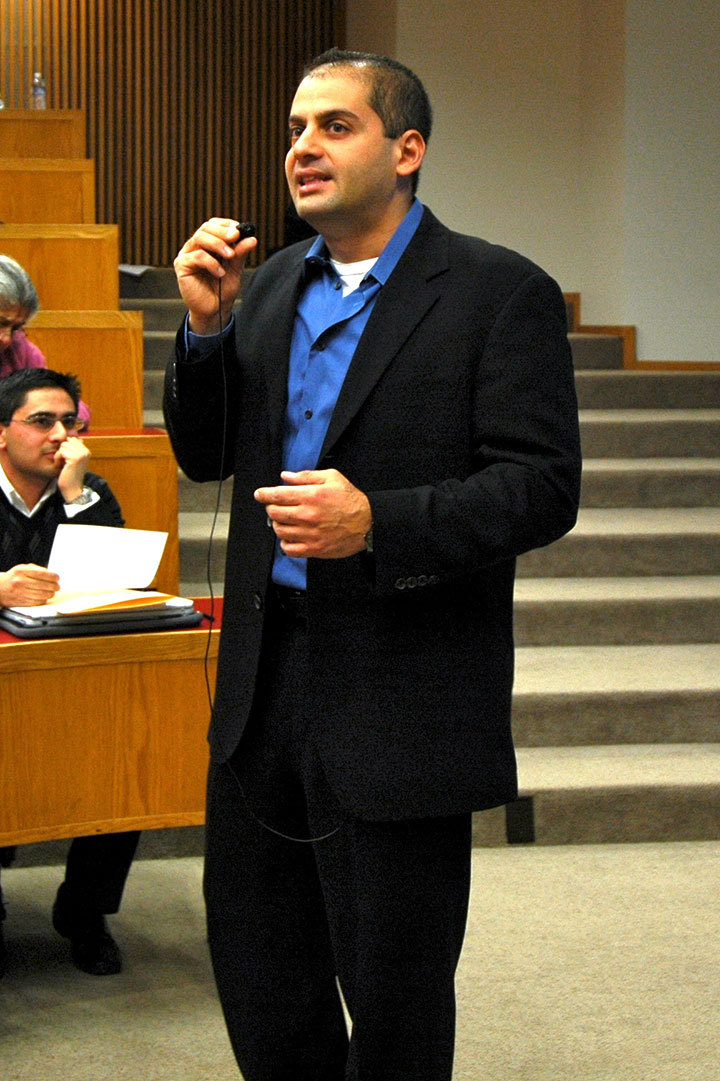 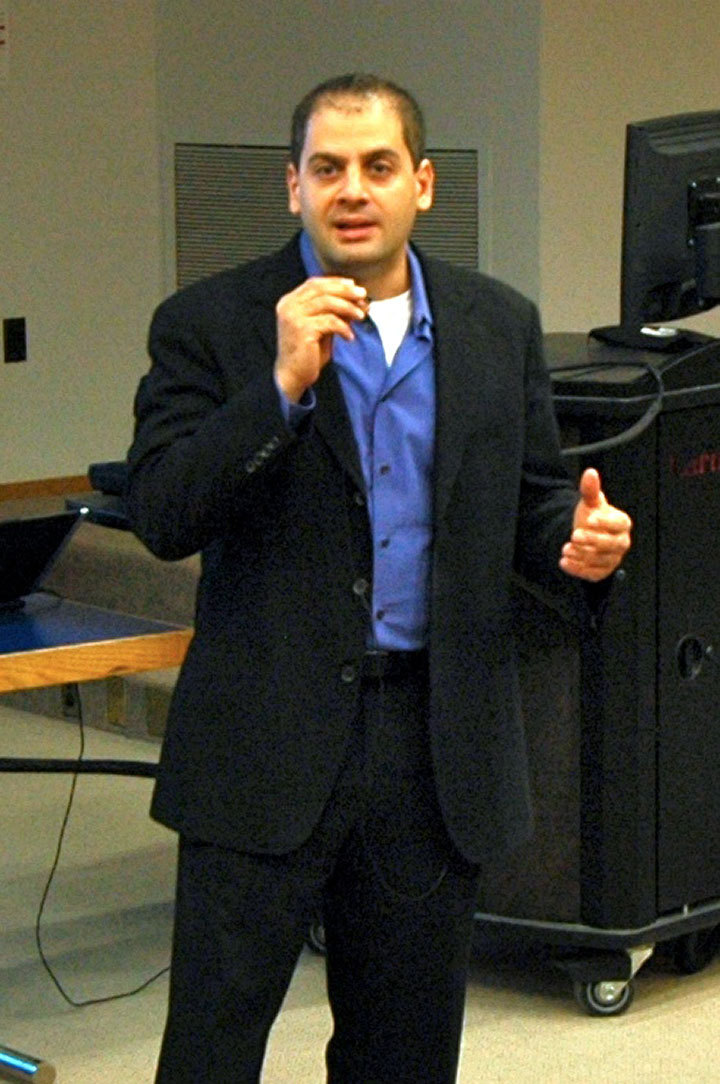 Afghanistan poses a much greater challenge to U.S. foreign policy than Iraq, said Abdulkader Sinno, assistant professor of political science and near Eastern studies at Indiana University, at a lecture at Carnegie Mellon co-sponsored by the Muslim Students Association (MSA), the Arab Students Organization (ASO), the Office of the Dean of Student Affairs, Heinz College, and the International Development Group.

Last year, the MSA invited a distinguished Iraqi scholar to discuss in a similar manner how U.S. foreign policy could improve in Iraq.

“Sinno’s holistic view of the situation in Afghanistan really broadened my view of the conflict in that region,” said Ziad Al Bawab, a Ph.D. candidate in the electrical and computer engineering department and board member of the MSA.

Sinno mapped out the deteriorating situation in Afghanistan by presenting the historical circumstances that led to it, as well as the present political framework that serves to aggravate it. Besides Taliban rule, he identified ethnic strife, opium trade, and institutional corruption as some of the major difficulties Afghanistan must overcome to avoid becoming a failed state.
Currently, there are about 38,000 U.S. and 32,000 NATO troops in the region, as stated in a New York Times article. Since the U.S. invasion of Afghanistan in 2001, there has been a colossal escalation in U.S. military spending on the war in Afghanistan.

Last week, President Obama announced the allocation of 17,000 more U.S. troops to Afghanistan, bumping the total up by almost 40 percent.

“One is forced to wonder why a state so notorious for its resistance to foreign occupation, did not resist U.S. occupation at first,” said Sinno.

According to Sinno, Afghanistan’s lack of active resistance to U.S. occupation in 2001 appeared to the West as a sign of acceptance, when it was in fact the crushing of the warlords that brought Afghans a temporary sense of peace.

Sinno explained the difference between the Taliban fighters that emerged victorious out of the Soviet war in Afghanistan and the extremist Taliban faction of today, which dominates a large portion of the region and is known for its predatory behavior against civilians. The former were nationalistic freedom fighters who managed to reunify Afghanistan by protecting its people from the warlords. The latter, however, is a consequence of the U.S. invasion.

The Taliban’s initial agenda of strict law and order gained popularity among the Pashtuns, the largest ethnic group in Afghanistan, said Sinno, adding that this internal transition was behind the Afghans’ lack of resistance.

“The Taliban [responsible for] the violence in Afghanistan today is a re-emergence of the defeated warlords,” said Sinno.
The Soviet invasion of Afghanistan during the 1980s stripped the warlords of their power. In response, the Central Intelligence Agency equipped the Afghan warlords with millions of dollars worth of ammunition. Armed by the U.S. and supported economically and militarily by Saudi Arabia and Pakistan, the warlords not only defeated the Soviets but also consolidated power by preying on the local population and benefiting from opium trade in the region.

During the U.S. invasion of Afghanistan in 2001, the U.S. military patronized the once-defeated warlords who in turn patronized Afghan citizens, said Sinno.

“Bush’s ‘Afghan model’ of warfare was a disaster from a policy point of view,” said Sinno. The Afghan model of warfare refers to the use of indigenous allies to replace American ground troops by employing U.S. air power, special operations forces, and weapons. “It allowed the defeated warlords to re-establish themselves and regain influence, degenerating Afghanistan into chaos,” he explained.

Further, there has been a dramatic increase in militant and insurgent groups other than the Taliban since the U.S. invasion.
“Warlords and local leaders are seeing where the wind will blow, so they can safely join the winning side. The day these insurgents join the Taliban, the U.S. will lose this war,” predicted Sinno.

Sinno also said that President Hamid Karzai’s government defeats the purpose of establishing a democratic state because it does not allow the creation of parties, centralizing all political power in the hands of Karzai.

Instead of further arming Afghan militias by forming the Afghan Public Protection Force, the U.S. must devise a Marshall Plan for Pakistan, said Sinno.

On the recent allocation of troops to Afghanistan by the Obama administration, Sinno said that the surge would only work if it were a part of a broader, more comprehensive strategy to stabilize Afghanistan.

Sinno brought the lecture to a close by proposing that President Karzai must allow the Taliban to run in democratic elections later this year.

“If they accept to run in elections, they will not get a lot of votes. And if they do get considerable votes, they will become a part of the state apparatus,” said Sinno.

President of the ASO and sophomore science and humanities scholar, Bassem Mikhael, said, “An excellent lecture. I was impressed by the conversational nature of the event. We really wanted to generate healthy discussion, and it did exactly that.”